Better conditions for early growth have Brazil soybean planting ahead of both last year and the five-year average.

Soybean planting in Brazil is off to a strong start. Brazilian agricultural consultancy Safras and Mercado reports that, as of Nov. 4, Brazilian farmers had finished 52.5% of their planting. This rate is more than 10% percentage points ahead of 2015's 42.3%, and is also ahead of the five-year average of 48.7%.

Much of the reason for the faster planting pace, especially in Mato Grosso, is weather-related. Last year, dry soils and a lack of rain delayed planting in Mato Grosso, along with Goias and the northeastern portion of the country known as Mapitoba (portions of Maranhao, Piaui, Tocantins, and Bahia). In fact, during this planting season, one recent week reportedly was favorable enough that 25% of the soybeans in Mato Grosso were planted in one week, which is almost unheard of.

Additionally, the majority of the soybean acreage that will be followed by a second crop of corn has already been planted -- another round of good news for the safrinha corn crop. Also, the earliest-planted soybeans in Parana are reportedly beginning to flower.

The farthest-southern state, Rio Grande do Sul, has had some contrasting issues with too much rain. The rain has set back planting progress; soybeans in Rio Grande Do Sul are reportedly 10% planted going into the best planting time during November in southern Brazil.

Forecast rain for Brazil calls for 1.5 to 3 inches in Mato Grosso and Goias during this week, and one-tenth to one-half inch in Rio Grande do Sul, Parana, and Mato Grosso do Sul. The lighter rains in southern Brazil will favor additional planting, while the heavier rains farther north will continue to support soil moisture recharge. 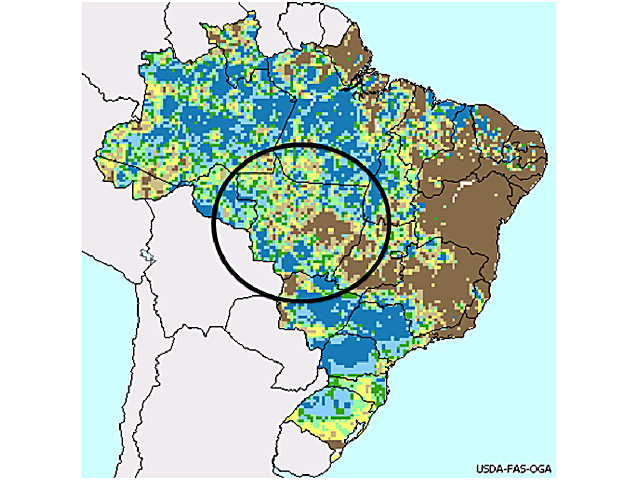