In western Nebraska, there are three old men who have survived life's challenges now for 70-plus years. They had the privilege of growing up together, raising their families in the same communities and baling hay and running cows next to one another their entire lives.

Pete is the farmer of the group. His granddaddy farmed, his daddy farmed and you're darn right: When the teacher asked him where he was going to college, he proudly piped up and said with a puffed-out chest, "School might be your dream for me, but it's not me, Mrs. Williams. There's corn to be ditched, hay to be cut and the beets aren't going to grow themselves!"

Looking back on life now, there were days when Pete thought he should have listened to Mrs. Williams about going to college and having a "backup" plan. But through life's aches and pains, he's made it. Pete has three lovely daughters all grown and married and a herd full of wild grandchildren of his own now.

Bill is the rancher of the group. Unlike Pete, Bill's family didn't have much to hand down to him. Right out of high school, Bill went to work for a local rancher where he learned the ticks of ranching and worked very few weeks that didn't include 90-plus hours of fence-stretching, backbreaking labor.

But when Bill finally got enough leases of his own put together and got some of his cow debt paid down, he told the old man he worked for "So long!" and went to growing his own dream. Together, Bill and his wife have stretched pennies further than a mile runs and wider than the ocean flows. But through the hard times together, they have accumulated 350 cows and a fine piece of land. And though their faces have a few more lines than they once did and their backs are hunched over and tired, they did it together -- and to them that's all that matters.

The last of the group, Ed, took the traditional route through life. He graduated from high school, left the farm, went to college to get his business degree and later came back to his hometown to start a local accounting business. After 20-plus years, Ed and his growing family were able to buy a little piece of land on the outside of town where they could run a couple of cows and put up just enough hay to feed them. It's not especially easy leaving your hometown and then coming back to it, but he didn't want to raise his family anywhere else -- even if Bill and Pete gave him crap for being a hobby-farmer.

Through life's recent turn of events and the craziness it's brought to all our lives, the three men had three very different opinions on the situation. As they have for the last three decades, the men got together to have coffee and shoot the breeze.

Pete was in utter panic. You could tell by his facial expressions that he was merely sick from worrying about what was going to come of all of this, and as he pecked at his phone trying to get the "@#!*@&" thing to work so he could read his email, each headline that he read made him more and more queasy.

Bill, on the other hand, maybe didn't pay enough attention to the situation. His grumpy old self had a rather simple outlook on it all -- we all are going to die one way or another, so -- while he moved boldly ahead with whatever facts he had, with no regrets.

And Ed took the middle ground. He knew the financial implications that COVID-19 was having on the economy, he knew that business was going to be tough, and he knew that it was going to take some time for this all to pass, but in due time, it eventually would.

The truth of the matter is that we all need a little bit of all three of those men in us now. We need Pete's awareness, Bill's boldness and Ed's discernment.

I look at where our markets are today and, like many folks, go through various emotions. Concerned here, worried there, annoyed here and simply ready for it to be done and over with. But as we continue to wade through these times, we must keep a balanced mindset.

I look at my grandparents and think about the brave ranchers that made it through the interest rates in the 1980s. I look at when my parents were just starting their cow herd and the effects that bovine spongiform encephalopathy (BSE) had on the North American cattle market -- but they weathered the uncertainty at that time.

And now the heartache is in our court. There's no doubt we all will be affected by COVID-19 one way or another (financially, emotionally, mentally) but the bigger point is how we come out of this.

We must fix our eyes to the future and press through life's current challenges, so someday we'll be the ones in the coffee shop talking about this and know we did the best we could at the time and accept without regret the tough decisions we made.

ShayLe Stewart can be reached at shayLe.stewart@dtn.com 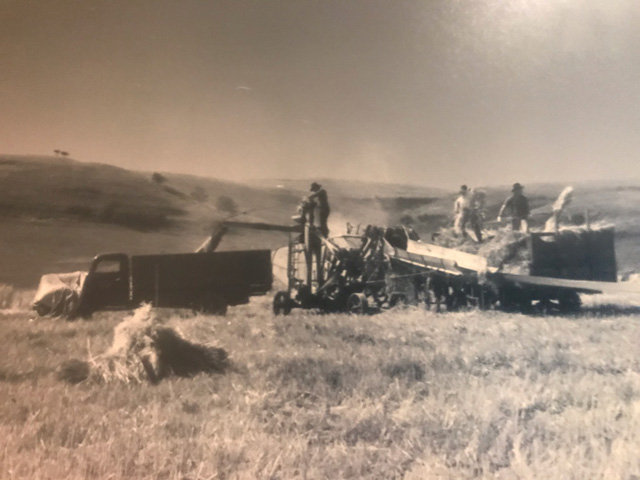