ROCKVILLE, Md. (DTN) -- You don't need to be fluent in French to know that the term "force majeure" means serious business.

The phrase, often found in legal contracts, has surfaced in the news recently, after agrichemical company Bayer issued letters to retailers warning that the company may not be able to fill some glyphosate contracts. (See more on that here: https://www.dtnpf.com/…)

DTN checked in with Tiffany Dowell Lashmet, a lawyer and a Texas A&M Extension specialist in agricultural law, to unpack what this term means and how it might affect the contracts many farmers sign each year.

WHAT DOES "FORCE MAJEURE" MEAN?

As the French term hints, "force majeure" refers to major events out of a legal party's control, Dowell Lashmet explained. It is usually found within clauses that discuss possible termination options for the contract.

"What it basically means is if there is some sort of unusual, unforeseen event that is outside the control of the parties in a contract, and that event prevents them from being able to fulfill their contractual obligation, this type of clause basically excuses them from those obligations," she said.

HOW COMMON IS THIS KIND OF CLAUSE?

These types of clauses are actually quite common, Dowell Lashmet warned. "Frankly, it's in most commercial contracts that people sign," she explained.

"Maybe the one type of contract you don't see it in is in a lease contract with your landlord," she noted. "But in more commercial-type contracts, it is very common."

HOW BROAD OR SPECIFIC ARE THESE CLAUSES?

The wording of the clause will greatly depend on each contract, Dowell Lashmet noted. "Generally, it's pretty broadly written, and the examples you'll see listed are things like acts of war, hurricanes, an epidemic -- things that seem pretty unrealistic until it happens!"

While the clause will usually list example events specific to the contract, they can also include language including non-specified events. Some contracts that Dowell Lashmet showed DTN included lines referencing "any event that is out of control of the party" or "any cause not reasonably within the control of the party claiming suspension."

This kind of language really broadens the potential causes that could push a party to invoke force majeure, Dowell Lashmet noted.

You don't often see parties claiming force majeure for the major disruptions listed in these clauses -- and the fact that lawyers and farmers are facing this topic head on multiple times in the last two years is a testament to the unusual times we are living in, Dowell Lashmet admitted.

"It is rare to see it on this level," she said. "The last time I got questions about this topic was in March of 2020, when we had the pandemic start and we saw nationwide lockdowns."

WHAT ARE MY RIGHTS IF FORCE MAJEURE IS INVOKED?

"A party gets to declare force majeure under a contract, but that doesn't automatically mean that it applies," she explained. Both parties can sue to go to court and argue if the force majeure clause is warranted.

"In the case of a lawsuit, a court gets to tell you if your situation meets the contractual definition of force majeure," Dowell Lashmet said.

Finally, a party must make good faith efforts to meet the contract in other ways before giving up and declaring force majeure, she added. "They have to actually try and find a workaround or other solutions first," she said.

THE TAKEAWAY: READ THOSE CONTRACTS CAREFULLY

In a time when many of us "sign" contracts with the tap of a finger on a smartphone, it is easy to get casual about entering into contractual agreements, Dowell Lashmet noted. But the global disruption of the past two years is a harsh lesson in the importance of reading everything you sign thoroughly, regardless of how small it may seem, she said.

"This is going to be on my gravestone one day -- it's the thing I preach the most," she said. "You have to read the contract!" People usually note the length of the contract and any dollar amounts involved, but ignore the rest of it, she said.

"I'm not saying that you should NOT sign a contract just because you find the existence of a force majeure clause," she added. "But you do want to be aware that it is in there and something like this could happen." 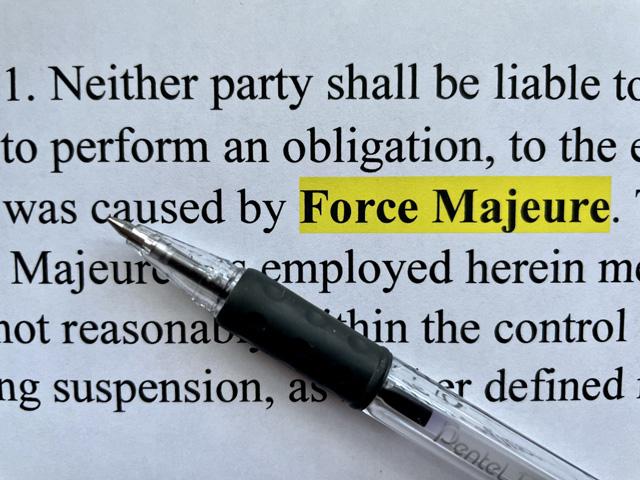