The fields are alive with the signs of soybeans this fall. Great sweeps of green volunteers have emerged with recent rains and warm weather.

So, let's do some bean counting. Just how many beans did you leave in the field following harvest? And, can you figure out where the loss happened in the harvesting process by looking at emergence patterns?

The general rule of thumb is 4 beans (loose or in pods) or 4 volunteer soybean plants per square foot equals 1 bushel per acre of lost yield, according to Mike Staton, Michigan State University field crop educator. "It's difficult to get harvest losses down below 1 bushel per acre, so I would consider preventable harvest losses as anything above that," he told me by email.

Shawn Conley, University of Wisconsin soybean and wheat specialist, adds a small caveat of soybean seed size to the discussion. He generally goes with 4 to 5 volunteer plants per bushel, depending on the production year.

University of Illinois crop production specialist Emerson Nafziger wrote about the patterns of harvest loss recently https://farmdoc.illinois.edu/…. In that report, Nafziger estimated that maybe 3 to 5 bushels of soybean were left on the ground in some Illinois fields this year.

"Distribution of seedlings after rainfall can tell us some about how grain was lost during harvest," he wrote. "If soybean seedlings are concentrated between the combine wheel tracks, seeds either came over the separator out the back of the combine or fell out of the header during the gathering process. If they are more uniformly distributed, they were likely knocked out of pods at the cutter bar, possibly by the reel."

Staton observed that many of the losses this year in his state were due to gathering losses at the combine header, rather than threshing and cleaning losses.

"Some producers I have discussed this with feel that because the volunteer plants are more dense in the chaff behind each combine pass, that the losses must be due to beans being lost out the back of the combine. Another more likely explanation for the pattern in the field is that the chaff promoted better germination of the seed that was lost at the header. You will also see fields where the plants are more dense in the combine's tire tracks -- again, due to better germination conditions," he said. Find Staton's discussion about harvest challenges of shattering and lodging here:

Warm weather coupled with moisture have encouraged fields to green up in Arkansas this year, as well, said Jeremy Ross, University of Arkansas soybean specialist. While some may refer to this as unintentional cover crop, frost pretty much eliminates the volunteers before they can make much of a contribution.

"Since these soybean plants are so small, they aren't accumulating a significant amount of nutrient and aren't adding anything back as organic matter," Ross told DTN.

This second-generation soybean crop happens every year to some extent. Emily Unglesbee wrote about the science of soybean shattering several years ago. You can read it here:

Some varieties and certain fall conditions make some falls more prone to volunteers than others. I will never forget standing with my father in a fine-looking field of emerged soybeans in late October to hear him mutter: "I sure wish they'd looked this good when we seeded them the first time." 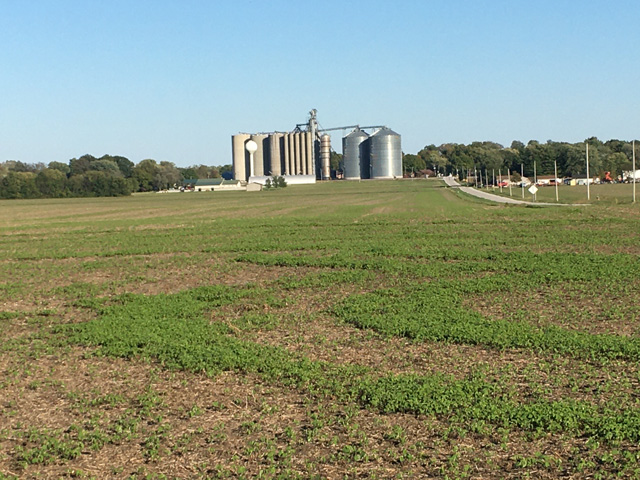