DECATUR, Ill. (DTN) -- The early days of genetic engineering became mired in a mix of competition, politics and activism. As new foods derived from next-generation gene editing come to market, there's caution in the familiar words of philosopher George Santayana: "Those who cannot remember the past are condemned to repeat it."

During the next few weeks, you'll notice several DTN articles highlighting the past, present and future of genetic engineering breakthroughs in agriculture. It's all part of a special series called Gene Revolution Turns 25.

There's plenty of reading material if you find yourself still hungry for more information on genetic engineering. Here are a few books from my library that I keep within reach:

The copyright may be 2001, but Charles' book holds up as a record of the people and events that have shaped the technology. I was writing about the industry during the late 1980s and interviewed many of the main characters in this book, but reading it brought many of the pieces together.

"I came at the subject at a good time," said Charles of his ability to gain candid disclosure from commercial firms and pioneering scientists, both private and public. "The scientific community at that time were very open to talking about it (genetic engineering) as sort of a scientific triumph. That might not have been possible when things got bogged down later in more angry arguments," he told me during a recent interview.

Beyond traditional row crops, readers of Charles' book learn more about early failed attempts to bring genetically engineered innovations such as bacteria designed to prevent ice formation on strawberries and traits that delayed ripening in tomatoes.

Another book I like is Belinda Martineau's "First Fruit." This book digs deeper into the birth and brief, two-year life span of the slow-to-rot Flavr Savr tomato, which was the first engineered food to be commercialized in the United States.

A good read about the technology risks and benefits for developing countries can be found in "Seeds of Contention: World Hunger and the Global Controversy over GM Crops," by Per Pinstrup-Andersen and Ebbe Schioler.

If you missed the first two stories in our series, you can see them at: 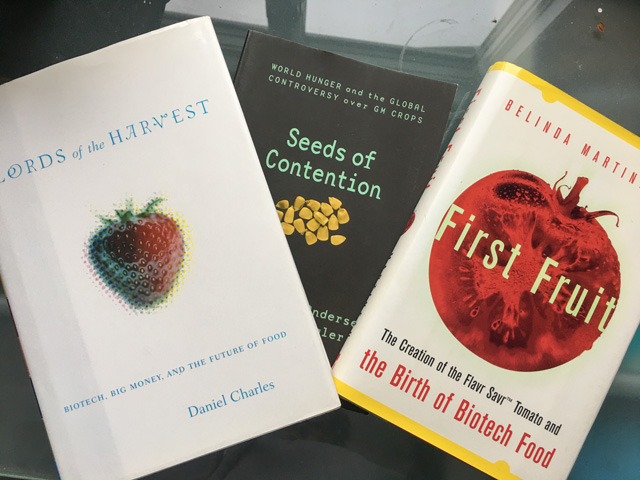