"We have data verifying that SCN is worse in hot, dry years," said Iowa State University Nematologist Greg Tylka. "It's not just because plants are stressed from drought, but also because the nematode is reproducing much quicker, raising population densities."

The SCN life cycle speeds up during drought-like conditions. "We don't know the mechanism of it, but reproduction happens much more quickly, creating more generations in a single growing season that ultimately leads to higher egg counts during fall soil sampling," Tylka added. "In areas impacted by drought with a traditional corn-soybean rotation, I would expect that in 2022, many of the fields that grew soybeans this year would have increased levels of SCN and increased yield loss."

You can find the videos here: https://www.thescncoalition.com/…

Management strategies for SCN depend on knowing SCN levels within a field. "With research showing that SCN populations are becoming resistant to the source of resistance (PI 88788) used in 95% of commercial soybean varieties, farmers can no longer assume that planting an SCN-resistant variety is controlling this pest," said Markell. "That's why The SCN Coalition recommends that farmers know their nematode numbers."

Soybean association boards in several states offer free SCN soil testing. In states that don't offer cost assistance, SCN tests generally cost $1 to $2 an acre. "The yield loss potential is $10 to $20 per bushel, so testing makes economic sense," he said. "You can have yield losses of up to 30% from SCN with no above-ground symptoms."

During a hot and dry growing season, soybean growers would certainly want to keep an eye on fields that had experienced drought stress. Soybean growers with sandy soil or sandy spots within fields should also consider those spots for soil sampling. "Because those fields are so well-drained, we always see higher reproduction in sandy soil," Markel said.

Soil pH and texture also impact SCN reproduction, Tylka noted. "Our first inkling that SCN reproduced well in high pH soils came after ten years of grid mapping on a central Iowa farm. That data revealed the highest pH spots in the fields had the highest nematode numbers. When you laid the soil pH and SCN maps side by side, they were in agreement nearly 85% of the time. At the time, it was counterintuitive because SCN is an obligate parasite, meaning it needs healthy plants to get the most nutrition. To have increased SCN reproduction on high pH soils where the plants are suffering from iron chlorosis was somewhat of a surprise," he said.

The SCN sampling process is similar to soil fertility sampling. Use a soil probe that's a 1-inch diameter tube. Collect 20 cores or more from 6 to 8 inches deep every 20 acres.

"We'd like cores collected either in a zigzag pattern, or you can pull cores from high-risk areas in the field," Markell recommended. "Those include entry ways, high soil pH areas, low spots and areas that have previously flooded, as well as areas in the field with unexpectedly low yields that you can't explain."

SCN has now been detected in every soybean-producing state except West Virginia and into Canada. 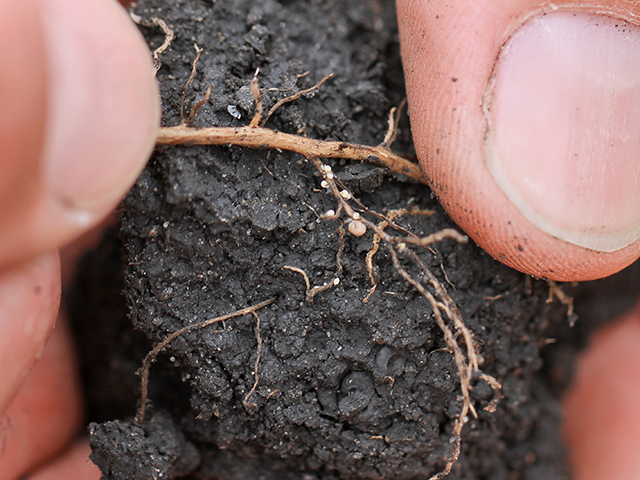