DECATUR, Ill. (DTN) -- Corn tells us precisely when it's all grown up. That blackened area at the kernel tip is your sign the crop has reached physiological maturity and will now begin a path to full adulthood (or kernel dry down).

This stage of corn maturation is often referred to as reaching "black layer." Find it by removing a kernel from the cob and peeling the skin back where the kernel was attached to the cob.

But what is black layer and what does it mean?

Dekalb Asgrow Technical Agronomist Lance Tarochione explained that placental cells within the kernel actually die, darken and collapse into a thick layer, which appears black. These specialized cells have been absorbing and transferring sugars and other nutrients produced by the plant during photosynthesis.

"This black film or layer seals the kernel from further development or increase in seed weight," Tarochione noted. The kernel moisture content at black layer formation usually ranges from 25 to 40%, but averages around 30%.

Corn physiologists maintain that kernel black layer formation always happens -- even if corn is frosted or faces some other late-season stress. In some cases, such as plant death due to stalk breakage, the black layer may form without the usual progression of milk line to the base of the kernel.

Want to learn more? There are many interesting studies that have looked into black layer. Here's some more reading on the topic: 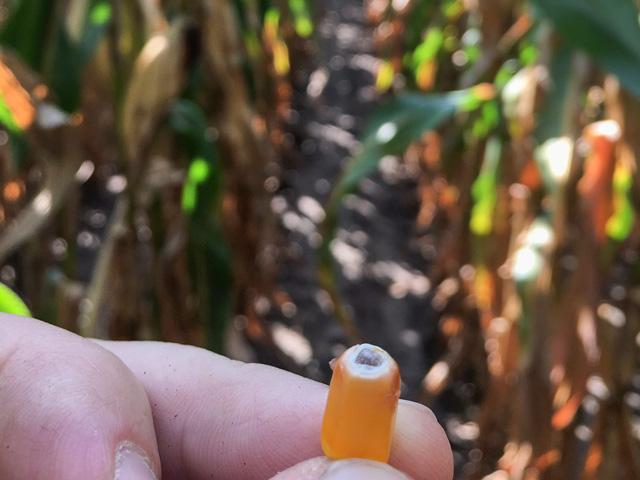