DECATUR, Ill. (DTN) -- Many years ago, my grandmother gave me a gift nestled in a wicker basket. I don't remember the gift, but I've never forgotten the basket.

It was the perfect vessel to corral books and a fluffy blanket. It sat by the edge of the sofa in my tiny college apartment.

One day I came home from class to an apartment buzzing, and it wasn't the landline telephone. Insects had invaded. The apartment management was perplexed by their presence -- no one else was reporting problems. I finally swatted and sprayed my way free of the infestation.

Then, one day, I moved the basket. Beneath it was a layer of sawdust and a bazillion miniscule holes in the woven wicker reeds. The mystery was solved. The bug that had eaten its way to freedom and a new home most likely was some version of the powderpost beetle. Still, I've always wondered if something more exotic had invaded my space.

That memory came crawling back this past week as the world went on alert when unsolicited packages containing seeds began arriving in the mail from China. On late Friday, July 24, I received a notice from the Louisiana Department of Agriculture about the situation. I posted a warning on my Twitter feed to alert individuals who might receive such a package to contact proper regulatory authorities. My notifications instantly began to ping.

Some of those notifications came from people needing assistance to find the appropriate regulatory agencies. Hotline numbers for such things were frustratingly rolling over into no-man's land. The weekend was filled with sorting out people who genuinely needed help and those merely convinced the world was ending.

On Monday, we dug into the situation more. Read that report here: https://www.dtnpf.com/….

Since then, many states or their respective departments of agriculture or whatever division controls plants and seeds in that state have issued warnings about the "mystery seeds." The Animal and Plant Health Inspection Service (APHIS) has notified DTN that investigations are underway.

"USDA is aware that people across the country have received suspicious, unsolicited packages of seed that appear to be coming from China. USDA's Animal and Plant Health Inspection Service (APHIS) is working closely with the Department of Homeland Security's Customs and Border Protection, other federal agencies, and State departments of agriculture to investigate the situation," their release read.

Osama El-Lissy, the deputy administrator for APHIS' Plant Protection and Quarantine Program, released a statement that residents in 22 states, as well as people in Australia, Canada and the EU, had received similar shipments.

He said it is thought the seeds are likely part of an e-commerce scam called "brushing" where the sender sends packages of little value and then makes up glowing reviews supposedly from the recipients in an effort to boost sales.

El-Lissy also said in prepared releases that so far, the department had identified 14 different species of seeds, including mustard, cabbage, morningglory, rose and hibiscus and some herbs, such as mint, sage, rosemary and lavender. "This is just a subset of the seeds we have collected so far," he said.

Jason Fridley, an associate professor of biology at Syracuse University's College of Arts and Sciences whose research areas include plant ecology and invasive species, was taking a cautious, but optimistic look at the situation in his statement.

"The photos circulating online suggest the seeds are many different species, often vegetable seeds such as tomato, cucumber, citrus and sunflower.

"The objective of these mailed seeds is still unclear. Seeds can, of course, harbor pests and pathogens, and probably some of the species would include known invaders. But people in the U.S. already grow hundreds of species of potential invaders, very few of which are actually regulated.

"So, in the grand scheme, it seems unlikely the seeds will be invasive plants to devour the U.S., he said.

Still, to be safe, anyone who receives an unsolicited package of seeds should contact their State department of agriculture or APHIS plant health department (https://www.aphis.usda.gov/…) and follow these steps:

-- Save the seeds and the package they came in, including the mailing label.

-- Do not open the seed packets.

-- If the packets are already opened, place all materials (seeds and packaging) into a zip lock bag and seal it.

-- If the seeds have been planted, leave the seeds/plants in the ground until you receive further instruction from your State department of agriculture or APHIS.

Last, but certainly not least, do not eat the seeds or give them to your grandmother!

For a state-by-state directory of National Plant Board: https://nationalplantboard.org/… or contact APHIS State plant health director at The Association of American Seed Control Officials (AASCO): http://www.seedcontrol.org/…

Some states have issued direct contact information regarding this situation:

Arkansas Plant Industries Division at 501-225-1598. The Unsolicited Seed Reporting Form and more information can also be found at www.agriculture.arkansas.gov/plant-industries/department-collecting-unsolicited-seeds/.

Colorado Department of Agriculture's Plant Industry Division at cda_nursery@state.co.us or (303) 548-5333.

Louisiana Department of Agriculture, 225-925-4733 to arrange for a LDAF inspectors to collect the seeds and test them for positive identification.

Missouri Department of Agriculture's Plant Industries Division by phone at (573) 751-2462 or by email at aginfo@mda.mo.gov.

South Carolina Department of Agriculture's Seed Lab seedlab@scda.sc.gov or by phone at 803-737-9717 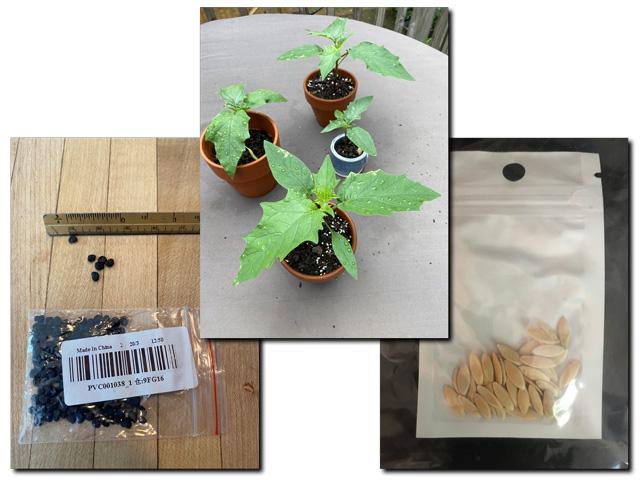