Growers would do well to keep their eye on a second major herbicide lawsuit in the months to come.

The plaintiffs who brought the dicamba lawsuit to the U.S. Court of Appeals for the Ninth Circuit also have a pending lawsuit against Enlist Duo, the 2,4-D-choline and glyphosate premix herbicide first registered by Dow AgroSciences, now owned by Corteva.

The lawsuit, which was filed in 2017, is under review in the same Ninth Circuit court, but it is in front of a different panel of judges. It was brought by many of the same plaintiffs, including the National Family Farm Coalition, the Center for Biological Diversity, the Center for Food Safety, and Pesticide Action Network.

The Enlist lawsuit makes many of the same claims that these plaintiffs successfully argued against dicamba herbicides. See more on the results of the dicamba lawsuit here: https://www.dtnpf.com/….

Both lawsuits argued that the two herbicides violate two sets of laws -- the Federal Insecticide, Fungicide and Rodenticide Act (FIFRA), which is EPA's governing law, and the Endangered Species Act (ESA). Both lawsuits asked the court to vacate the herbicides' registrations.

COMPARING DICAMBA AND ENLIST IN COURT

In the lawsuit against EPA's registration of Enlist Duo, the plaintiffs argue that EPA violated FIFRA in the following ways:

-- EPA failed to meet the requirements of a conditional registration of a herbicide, mainly by failing to prove that the registration "would not significantly increase the risk of any unreasonable adverse effect on the environment."

-- EPA failed to prove that Enlist Duo volatility would not have unreasonable adverse effect on the environment.

With the exception of that last claim, the Ninth Circuit judges ruled on nearly identical claims in the recent dicamba case -- and they agreed with the plaintiffs. They concluded that the three dicamba herbicides clearly posed a major risk to cause unreasonable adverse effects on the environment when the EPA re-registered them for two years in 2018, and that EPA committed the following errors in that re-registration decision:

-- The agency didn't correctly assess how many acres dicamba would be used on in 2018 (nearly 60 million acres, as it turned out), even though that information was available to them.

-- In their assessment, EPA stated that dicamba injury complaints from state pesticide regulatory agencies may be either under-reported OR over-reported, when there was ample evidence of the former and no evidence for the latter.

-- EPA never even attempted to measure the off-target injury that had occurred on the landscape since 2017, nor would the agency formally acknowledge that widespread injury had occurred.

-- The agency ignored the likely possibility that the incredibly complex labels they were issuing would be difficult to follow and would result in noncompliance.

-- EPA ignored the "anti-competitive effect" of the registration, given evidence that many growers felt compelled to switch to dicamba-tolerant crops just to protect themselves from off-target injury.

-- Finally, the judges contend that EPA ignored growing evidence of a painful social cost of in-season dicamba use to rural agricultural communities, such as strained neighbor relationships, uncompensated property damage and even one murder that occurred after an argument over dicamba injury in 2016.

So where does that leave the Enlist Duo herbicide?

To be sure, Enlist herbicides and their corresponding 2,4-D-tolerant seeds have not been a perfect system -- no herbicide-tolerant cropping system is. The technology can be especially problematic in the cotton-growing regions of the South, because of how sensitive cotton is to 2,4-D injury.

DTN has heard of farmers switching to Enlist cotton to protect themselves, and we have reported on off-target 2,4-D injury cases in the past few years.

But so far, the country has seen fewer Enlist acres than Xtend acres and far less evidence of Enlist Duo volatility problems. Essentially, the scale of its issues simply don't match the widespread off-target dicamba injury problems that DTN and other media outlets, farmers, rural residents, state pesticide regulatory officials and university weed scientists have reported since 2016. Nor has EPA been forced to amend labels nearly every single year for Enlist herbicides, as it has for the three OTT dicamba herbicides, to account for off-target injury.

So while the Enlist lawsuit does make some of the same FIFRA claims -- namely, that EPA did not adequately vet the chemicals before registering them -- the body of evidence that the Ninth Circuit is reviewing is rather different for Enlist Duo than it was for dicamba.

But there is a second set of claims in both lawsuits: the claims that the registrations violated the Endangered Species Act. In the dicamba ruling, the Ninth Circuit judges did NOT rule on these claims -- they set them aside and instead focused only on the FIFRA claims.

That means we don't have a clear idea of how compelling a Ninth Circuit panel of judges might find the ESA claims brought against Enlist herbicides in the lawsuit. They include, among others, that:

-- The agency failed to consider the effects of Enlist Duo applications in areas beyond the fields they would be sprayed on and underestimated the effects on endangered species within sprayed fields, as well.

-- The agency failed to use the best scientific and commercial data available on endangered species and critical habitats affected by the registration.

That makes this part of the Enlist lawsuit a bit more of a wild card -- and it's why farmers, ag scientists and state regulators would be wise to keep up with developments on that case.

The judges for the Enlist Duo case have held hearings and have all the necessary information in hand to make a judgement at any time.

Watch www.dtnpf.com for any updates on that case.

Watch the May 2019 hearing held by the Ninth Circuit judges in this case here: https://www.ca9.uscourts.gov/…. 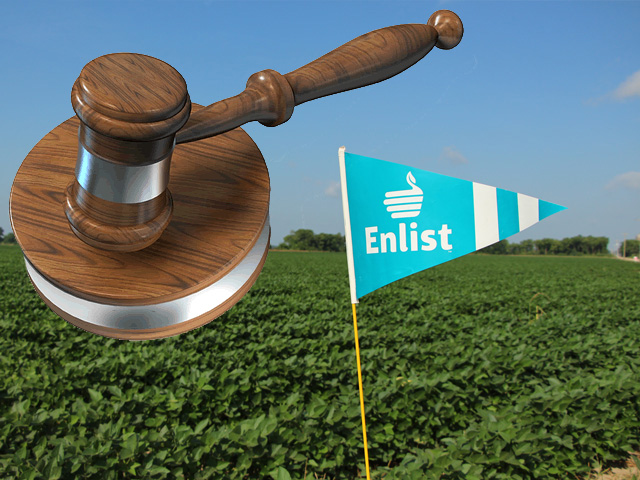