ROCKVILLE, Md. (DTN) -- A couple weeks of breathless "Murder Hornet" headlines and the ensuing public hysteria has reminded me of this ag journalist's own "murder pest" moment.

Reporting about new invasive pests is an important part of science journalism and yes, startling headlines are sometimes used to catch a reader's attention. It is true that the Asian Giant Hornet (aka the Murder Hornet) is an alarming pest, with the potential to harm native bee populations.

But one of the same characteristics that make invasive pests so frightening -- their unknown response to a new environment -- means there is a lot of uncertainty about their eventual establishment and effect.

Writing about scientific uncertainty can be difficult for journalists, because one of the golden rules of a news story is making a reader know why they should care about a topic. It's called the "so what" factor, as in, would a reader peruse this headline or story and then say "so what?" If yes, then you've failed.

Headlines and stories that say, "Obscure new hornet species could be a problem, but also maybe it won't be," aren't great at inspiring readers to stick with you through that last sentence. So a lot of journalists tend to focus on the potential threat without much coverage of another important part of every invasive pest story: The possibility that nothing much will happen at all.

Case in point: A long, long time ago, this budding, eager young ag journalist came across a very interesting tip about a very dangerous caterpillar.

The year was 2014. (Okay, so I'm not that old). The month, January. The pest? Helicoverpa armigera, aka, the Old World Bollworm, aka, THE MURDER WORM.

Just kidding, no one called it that. But the more I read about this pest's reputation across the rest of the world, the more alarmed I was.

I got the go-ahead to write the story. I called it A Very Hungry Caterpillar and published it in the April 2014 issue of Progressive Farmer: http://dtnpf-digital.com/…. I even wrote a follow-up blog because I had so many thoughts on this nasty little worm: https://www.dtnpf.com/….

No one paid too much attention. Farmers had plenty of fully present pests to worry about, and Brazil was far away.

Then, in short order, all my dire warnings came true.

First the Old World Bollworm showed up in Puerto Rico, a U.S. territory just one storm system away from the Florida coast, in September of 2014: https://agfax.com/….

The following year, USDA ramped up funding to search for and diagnose the pest: https://www.dtnpf.com/…. In March, an international team of scientists concluded that $900 million of U.S. crops were threatened by this pest and spoke of an "inevitable invasion of North America": https://journals.plos.org/….

Then, in July 2015, some Old World Bollworm moths were found in a trap near a tomato field in Florida. This was it! The invasion was underway: http://dtnpf-digital.com/….

And then ... nothing happened. Not in 2016, 2017, 2018 or 2019. For a fast-moving pest like the Old World Bollworm, which can churn out multiple generations in a single growing season, that's many lifetimes.

To this day, I scan every USDA invasive pest alert in my inbox carefully. I hunt for journal articles about the Old World Bollworm's development in other countries. I reach out annually to Southern entomologists to see if any more moth captures have occurred. So far, nothing.

Most recently, I touched base with Amanda Hodges, an Extension entomologist with the University of Florida, who specializes in invasive species and biosecurity and is among the scientists in the U.S. regularly surveying for Old World Bollworm. She is quite certain the pest is not a current U.S. resident.

"Last year, my lab initiated a more intensive survey for H. armigera in potential host crops and areas of Florida that have not been intensively surveyed by Florida-CAPS [Cooperative Agricultural Pest Surveys]," she told me in an email. "We are focusing our efforts on the immediate high-throughput analysis of Lepidoptera collected from traps and supplementing our trap captures with intensive larval surveys. At this time, we have not found H. armigera. If it is present in Florida, I am certain that these intensive survey efforts in partnership with the ongoing CAPS surveys would have found H. armigera."

Hodge's work here is an important part of invasive pest news that often gets lost in the immediate focus on scary new threats like giant stingers and beheaded honeybees. The primary reason we knew of the Asian Giant Hornet's very small, spotty invasion of the U.S. and Canada is because beekeepers and a host of scientists -- state, federal and academic -- are looking for them. The USDA's Animal and Plant Health Inspection Service exists specifically to do so.

It's a tough job, but their work catching Old World Bollworm moths, and now the Asian Giant Hornet, have bought farmers, beekeepers and scientists precious time to prepare for these troubling insects.

In the end, Hodges has no easy answer for why Old World Bollworm merely touched base here in 2015 and has not visited again.

Sometimes, she pointed out, pests simply don't pester us the way we expected.

"It is noteworthy to note that some of these pests take longer to move around and establish than we anticipate," she wrote. "I am very comfortable saying that we have not detected H. armigera, and of course, we hope that we will not detect it."

Amen to that. American farmers, and the ag journalists who serve them, have enough to worry about as it is. And since the 2020 pandemic has been a painful example of just how bad an unknown disease can be, it's nice to remember that the worst-case scenario doesn't always pan out for every pest, every time.

And don't worry, I'll still be watching for updates on Old World Bollworm -- and so can you! Keep looking (https://pest.ceris.purdue.edu/…) and let me know if you find it ... 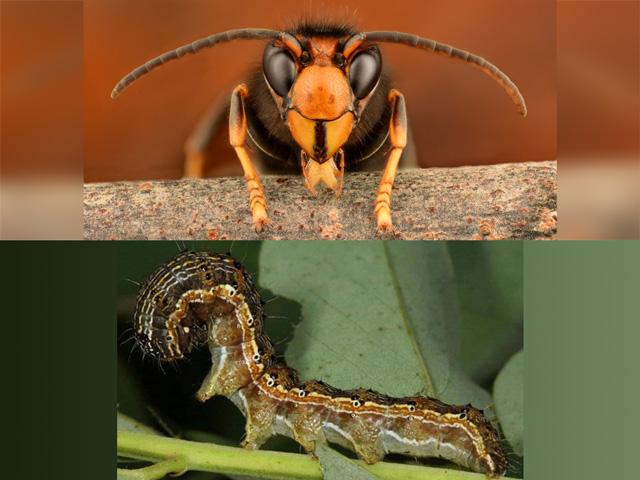