SEYMOUR, Ill. (DTN) -- Do you know yellow nutsedge from yellow foxtail? How about prickly lettuce from prickly sida? Do you know them at the seed, seedling and adult stages?

This summer I volunteered to help with the 2019 North American Weed Science Contest. It was truly a war on weeds. Some 248 students and 150 volunteers and coaches came together to test weed knowledge skills at the BASF Midwest Research Farm, Valent's Midwest Ag Research Center and Klein Farms near Seymour, Illinois. Nearby Bayer and Corteva employees also assisted.

Contestants had to correctly identify 25 weed species with the correct spelling of either the scientific name or common name.

Sprayer calibration challenges teams to calibrate a backpack sprayer based on a written problem. To make it more challenging, the mathematical figuring of the output based on spray tip selection, pressure and speed is also judged on the amount of time taken for the task. The second part of the exercise heads outdoors where the team demonstrates proper sprayer technique and the accuracy of their calibrated equipment.

Herbicide identification involves making assessments of 10 plots that have received pre-plant, pre-plant incorporated and post applications at the 1X rate. Contestants get a list of 30 possible herbicide scenarios, but only 10 of the products are selected for the contest.

Farmer problem-solving is a role-playing exercise where the student assumes the role of an Extension specialist, salesperson, agronomist or researcher dealing with a client. The farmer clients may present scenarios ranging from herbicide injury and weed resistance to agronomic errors on a wide range of crops. Cotton threw more than one curveball to Northern contestants this year.

Jenny Schweigert was one of the real-life farmers testing contestants during the problem-solving event. A judge looks on while participants troubleshoot production problems and suggest solutions to the role-playing farmer.

"The depth of knowledge held by the students is impressive," she said. Schweigert, who farms in central Illinois, says she may have gained as much as the students.

"It gave me a better understanding of the retail side of agriculture and a better appreciation for the complexities of herbicide damage," she says.

The contest, to best recollections, began in the 1980s. Several of the regional societies of the Weed Science Society of America hold contests each year. A national contest is held every four years. For complete details and rules go to:

A couple of thoughts after attending:

1. It's an enormous undertaking to get live plants in fields and stage real-life examples -- especially this year with rain delays. Kudos to everyone involved.

2. If you think the next generation doesn't care about agriculture, volunteer to attend something like this.

3. My role was to shepherd students from one event to the next. Wow ... they were impressive, and since cellphones weren't allowed, we had great conversations. We need to put the phones away more often.

4. Weed science is complicated. It's getting more complicated. But I feel a bit better about the prospects of keeping ahead in the field of weed control with some of these students coming through the ranks.

Here's the overall team and individual winners for the 2019 event: 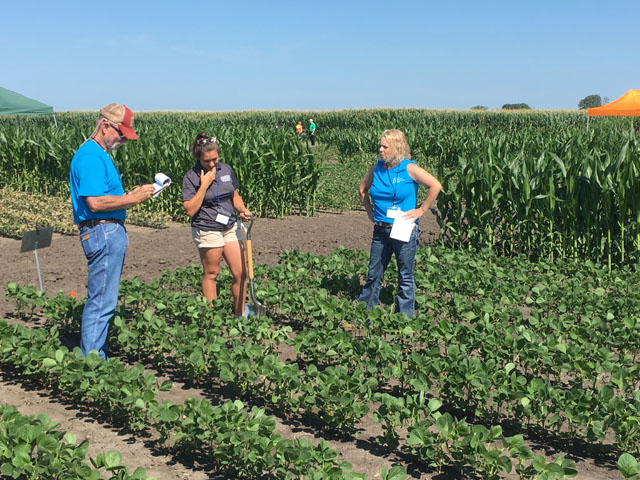