SAYBROOK, Ill. (DTN) -- When children leave the nest, almost every parent faces the sudden understanding you are no longer in control. At some point the feeling of panic is replaced by the "out-of-sight is out-of-mind" phase. That may come before, or after, the "what I don't know, I can't worry about" state or philosophy.

I began to see symptoms of those same self-preservation behaviors in farmers with the 2019 crop soon after final seeds were finally slapped into the ground. Except for some incidences when the kids started running with the wrong crowd -- such as thistle caterpillar or Japanese beetle -- scouting fields wasn't high on the list of desirable activities this year.

As one of my farmer buddies put it: "There's not a lot I can do about what is wrong with this crop. I'd rather not look at it."

This week we crossed the time to face reality line. Nature can still take its course, but the USDA World Agricultural Supply and Demand (WASDE) report issued more than a nudge to find out what we are facing in the field this season. Farm Service Agency (FSA) acreage reports added more to the confusion and skepticism of the USDA the report.

This week also kicked off the DTN/Progressive Farmer 2019 Digital Yield Tour, powered by Gro Intelligence. The in-depth looks at how this year's corn and soybean crop is progressing using Gro's real-time yield maps, which are generated with satellite imagery, rainfall data, temperature maps and other public data.

You can find the reports those reports and state summaries here: https://spotlights.dtnpf.com/….

Seeing is believing, so this week I put my boots in some fields to pull some yield samples. You can find the measurement techniques used and do your own field estimates here: https://www.dtn.com/….

These are snapshots, especially since so much of the crop is immature and there are many weather scenarios that could still influence yields. It's really hard to know how to measure or whether to measure an ear that is barely past blister -- the same goes for itty bitty pods.

Crop tours, in general, are just that -- scouting reports in the moment. Just as we might try to anticipate the moves of an opposing athletic team, the answer comes when the final whistle is blown and even then, we argue about the results.

However, what I quickly learned this week is that no matter how good the crops looks from the road, corn and soybeans didn't get through their 2019 summer season unscathed.

On one of my journeys, I visited Tyler Young, who farms along the Ford and McLean county line in east central Illinois. Visits to the area earlier in the season showed good yield potential, despite some planting challenges. All summer I'd been hearing this part of Illinois was one of the garden spots.

I also admire Young's attention to detail and his agronomic recordkeeping. He's a serious farmer who studies hybrids/varieties and use of inputs.

Unlike most years when everything gets planted in nearly the same conditions, Young had a laundry list of maturity and planting dates and other scenarios for me to consider when it came time to pull our yield sample. In other words, I had the benefit of having the farmer with me to explain what we were seeing. Young could tell me specifically where the soil type changes and what areas of the field were likely to top out on yield. Those details are not typical of a random crop tour.

As DTN reported as of Aug. 16, according to Gro estimates, Illinois is on track to yield an average of only 153 bpa, a 27% tumble from last year's average yield of 210 bpa and well below USDA's August estimate of 181 bpa. In Gro's county-level yield maps, most counties in the northern two-thirds of the state boasted average yields of 200-plus bpa in 2018. This year, county averages in that region vary widely from 124 bpa to 177 bpa.

The yield formula DTN uses calls to gather three ears from 30 feet of row. Communication broke down as we crashed through end rows to reach a representative part of the field. Young pulled an armful of ears from our sample row instead -- which actually worked out well because it showed the wide variation in ear size and maturity within the row (see photo with this story).

We were both surprised by the tell-tale signs of poor pollination, such as the "zipper" pattern produced by poor kernel set in an ear in a field of 111-day corn that was planted May 20.

Gro's estimate of a 143-bpa average for that area, a 30% drop from last year, sounds about right, he figured. Our estimates were slightly below that, but the zipper ear in the sample killed the count.

Since the wet spring ended, his region has received a scant 1.5 inches of rain in July and only two-tenths of an inch in August.

Young switched some corn acres to 101-day hybrids. We were surprised again to find more consistently sized ears in one of these fields that was planted June 5. How much heat and lack of moisture will hurt final yield remains a big question. I measured 217 bpa potential using the formula, but it is going to take some serious rain dancing and a lot of cooking this fall to make it happen. Kernel abortion is much less likely to occur once kernels have reached early dough stage, but severe stress can continue to affect eventual yield by reducing kernel weight.

Actually, Young is more worried about soybeans than corn. "We're starting to see spider mites showing up because we've been so dry. So many flowers are brown -- you'll have a pod with decent-sized soybeans sitting right next to a brown flower with no pod on it, or a pod the size of your pinky nail," he said.

What I found in Young's field continued to play out in my other travels this week, too. Almost every cornfield I sampled had some pollination issues. From the side of the road, the field looked good, but things get dicey as you work into the field.

I also found the corn is tall with high ear set. Stalks are brittle in some fields. Corn aphids were common and I found earworms feeding in tips of several samples.

In soybeans, dicamba injury was still highly evident in many parts of my Illinois travel area. Beyond the characteristic puckering, those injured fields appeared to be struggling to grow out of the injury as well this year, especially where conditions were dry.

In general, soybean pods were mostly flat to starting to fill, but many flowers had dried up and aborted. Pod counts were light in the fields I sampled, but many fields are still blooming.

Field differences are going to be huge this year. Determining stalk quality and what insect feeding might be taking place are things that might influence harvest scheduling.

There is more going on out there than you might want to know, but it is a good year to know where your crop kids are and try to limit the surprises.

The DTN/Progressive Farmer 2019 Digital Yield Tour, powered by Gro Intelligence, provided an in-depth look at how the year's corn and soybean crops were progressing during the week of Aug. 12, 2019. It featured crop condition and yield information from various states and included links to the Gro Intelligence yield prediction maps for those states, which included county level yield summaries.

The "tour" started in the west, with the first day's articles focusing on Kansas and Missouri and Nebraska and South Dakota. On Aug. 14, the tour explored yield estimates from Minnesota, Wisconsin and Iowa. On Aug. 15, the tour moved into the Eastern Corn Belt -- Illinois, Indiana and Ohio. 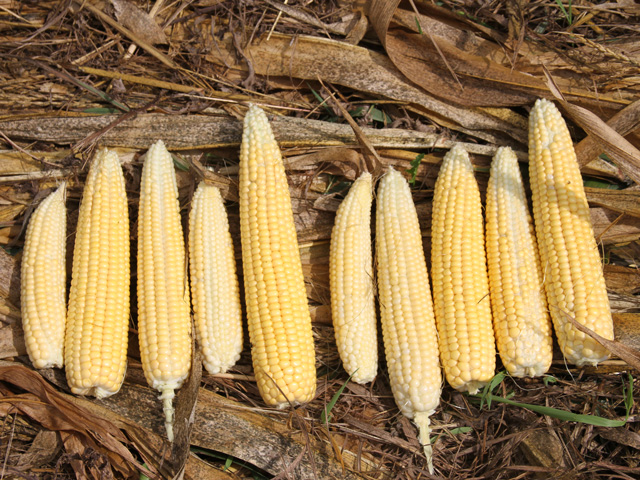