DECATUR, Illinois (DTN) -- Flickering fireflies are a sure sign of summer and farming tradition has long held they also signal the beginning of western corn rootworm egg hatch.

Entomologists now say that fireflies may not be the indicator once thought. "There are many different species of fireflies and their periods of activity are variable across species," said University of Illinois entomologist Joseph Spencer.

On average, expecting hatch to occur around the last days of May or the earliest days of June is a really good bet, he added. Not every year is average though -- rootworm eggs hatched a month early in 2012.

Pinpointing when larvae will begin feeding on corn roots helps to plan when to grab the spade and head to the field. Diagnostic root digs are the best way to discover if control measures are still working. The wily rootworm has shown abilities to challenge common management strategies such as crop rotation, Bt traits and soil insecticides.

Bt rootworm hybrids delay adult emergence for a few days and up to two weeks, Krupke said. "It seems to be a result of those plants being toxic, but not necessarily lethal, to the larvae. So some make it to adulthood on that poorer quality food supply, but they pay a price in a delay of emergence and the adults may be slightly smaller than those coming off of non-Bt corn," he said.

Spencer said rootworms eggs are dispersed at varying soil depths. Those closer to the soil surface tend to hatch earlier. Time of corn planting also plays a role as to when rootworms might feed -- all contributing to a hatch that can be variable and occurs over time.

"So blinking beetle butt bulbs may or may not be relevant," Spencer noted. "But humans are great observers and our brains are built to detect patterns. There's probably some element of truth to the fact that flashing fireflies and hatching rootworm eggs sometimes overlap.

"Perhaps the first sign of fireflies is best viewed as a reminder that it is time to start scouting for all sorts of crop pests," he said.

For more information on corn rootworm egg hatch go to: 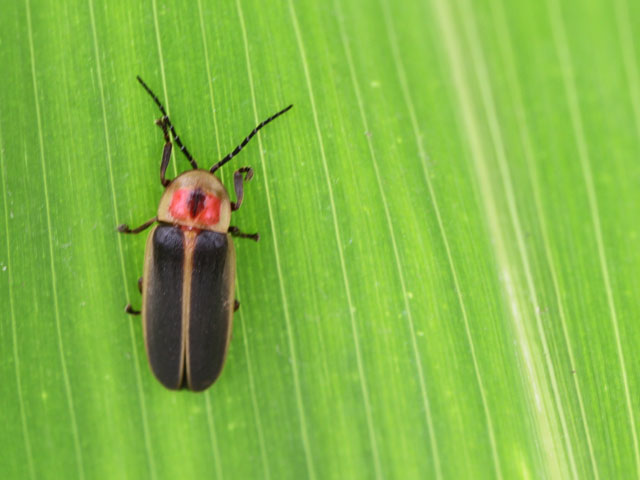