DECATUR, Illinois (DTN) -- I have often said that if our honeybees could be trained to strategically sting, they could serve as a natural type of botox. Here -- hold still for a little prick in that frown line -- how much could it hurt?

A lot, as it turns out. Celebrated boxer Muhammad Ali was famous for saying: "Float like a butterfly, sting like a bee." Last night I took it on the chin while rushing to meet my husband's shouts of alarm from the vicinity of our small apiary.

I'd gotten the message one of the hives had toppled to the ground. What I didn't know was that the shouts I heard from Jay meant he was headed toward me with a swarm of angry bees behind him.

It's sticky to complain about abundance, but it's been a great year for honey production at our place. It appears things are looking up for many bee yards across the country too.

The most recent USDA annual survey released this week shows the number of commercial colonies in the U.S. has risen 3% from last year to 2.89 million. The number of hives lost due to Colony Collapse Disorder (CCD) is down 27% from 2016. CCD numbers dropped by 20% for beekeepers with fewer than five hives.

Problems remain in bee land though. Varroa mite, an insect that literally sucks the life out of bees, remains the main stressor, according to the survey. However, it does appear efforts to increase pollinator habitat may be helping to overcome some of the pollinator problems.

For our part, the bee education effort never seems to end. Much like children, just when you think they are all tucked in for the night, some new crisis arises that was never on the radar.

This summer, we managed to retrieve a swarm of bees that were hanging out at about 20 feet in a locust tree. A five-gallon bucket mounted on a long pole and a ladder were utilized as gathering gear. The idea was to get the queen into the bucket and hope the rest follow her home. It worked and as a result, we had been feeling more confident about our bee abilities.

However, I had noticed a precarious tilt to one of our hives as the rapidly filling boxes (supers) started to stack up with capped honey. As more supers are added, the operation takes on added weight with deep boxes weighing in at about 80 lb. each and each super weighing around 50 lb. We had braced the hive to accommodate the lean, but failed to consider the soundness of the stand below the boxes.

Last night, my oldest son, home on a holiday, helped pick stingers from my face while lecturing me on my fool hardy rush to help without putting on my bee suit.

Good -- let him worry for a change. And for the next few days, I can honestly say that the extra chins I'm modeling are an all-new "bee"-uty treatment. 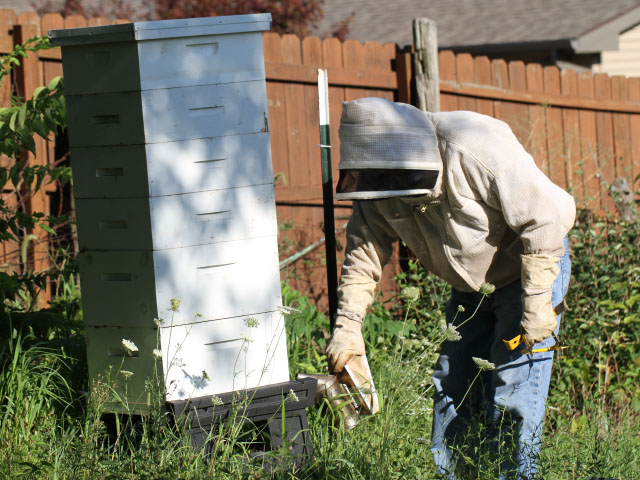