DENVER, Colo. (DTN) -- One year of attending the hard red winter wheat tour and I was smitten with Kansas. It was 2016. The skies were blue, clouds looked like cotton balls and temperatures better than any vacation resort.

And the crop was gorgeous. One of the tour organizers made us go redo several of our field measurements because he said they couldn't possibly be that good. He was wrong -- in fact, the tour underestimated that crop by 14.7%. The crop turned out to be not just good, but great -- yielding an average 57 bushels per acre (bpa).

On the last day of the 2016 tour, I turned to Leoti, Kansas, farmer Rick Horton and said I thought I'd finally found the perfect place to live. "You come back next year and we'll talk," he said.

Those words became prophetic this year. The crop broke dormancy in February and has since been harangued by freeze, a freak spring blizzard, heat, wind and disease. DTN Senior Analyst Darin Newsom, a Kansas native, noted that surely a swarm of locust must be in wheat's future because it is surely the only tragedy left.

Ideally, the 2017 wheat tour would be stomping across Kansas this week. It's been two weeks since a freak spring snowstorm raged through the Plains, dumping up to 20 inches of snow in some areas. Agronomists had told us it would take at least a few weeks to know how those hardest-hit fields might endure. Over the past few days, Twitter has been filling up with images of kinked stems turned brown and necrotic.

Throughout the week of sampling, critics said the crop tour estimates were high and couldn't possibly be representative. This year there were many who suggested the tour should have been postponed -- although I'm not sure how you reconfigure the schedules of nearly 90 people coming from all corners of the world.

We trudged on -- through mud and snow and rain. There were many fields we couldn't possibly begin to sample because they were still snow-covered and heavily lodged. So yes, this year, the numbers were slightly skewed toward central Kansas where weather had not been quite so unkind.

The three-day average over the fields that were calculated was 46.1 bushels an acre. While an estimated 7.4 million acres of wheat were planted in the fall, tour participants saw many areas where disease, damage from snow and freeze damage may eliminate those fields. This was accounted for in the final estimates.

The official tour projection for total production numbers of hard red winter wheat to be harvested in Kansas was 281,707,913 bushels. If realized, this would be 185 million bushels less than last year's crop. This number is calculated based on the average of estimated predictions from tour participants who gathered information from 469 fields across the state. The number of stops was down significantly from 655 fields during the 2016 tour. This was due primarily to snow cover in the western third of the state, where tour scouts weren't able to take calculations.

The thing to remember is the tour measures potential of the crop. Over three days, we randomly enter wheat fields along a specific route that does not change from year to year. We measure the average number of stalks per foot of row and the row spacing. We compute a rough yield based on formulas that include historical averages. If the field is mature enough, we count heads and establish an average spikelet estimate. The formulas do not take test weight or harvesting losses into account. It is also a snapshot in time -- as I heard over and over this year: "We'll know when the combines roll."

Abandonment is likely to be high this year. Wheat is cheap and western Kansas, in particular, has also been struggling with wheat streak mosaic virus (WSMV) that had threatened stands prior to the blizzard event. We saw many fields that had been destroyed and prepared for planting to corn or milo prior to the snowfall.

A recent DTN poll asked farmers to comment on how the wheat hit by the April 28-29 blizzard was recovering. Surprisingly, 38% of the respondents said the crop had made a complete recovery. Only 15% of those responding called the event a complete loss to their crop. The rest of the 133 sampled were divided between a lesser-anticipated loss.

Wheat, they say, has nine lives. This year, it used many of them up early. I may have also reevaluated my thoughts on Kansas weather. However, now that I'm not in Kansas anymore, I can't seem to shake the memory of the farmers I met there. I watched them dissect wheat heads, shake out pollen to see if it was still viable and dig through the snow banks to see if the crop would still stand. They were on this tour to learn and to use that knowledge to be more resilient -- just like the crop they care about so much. 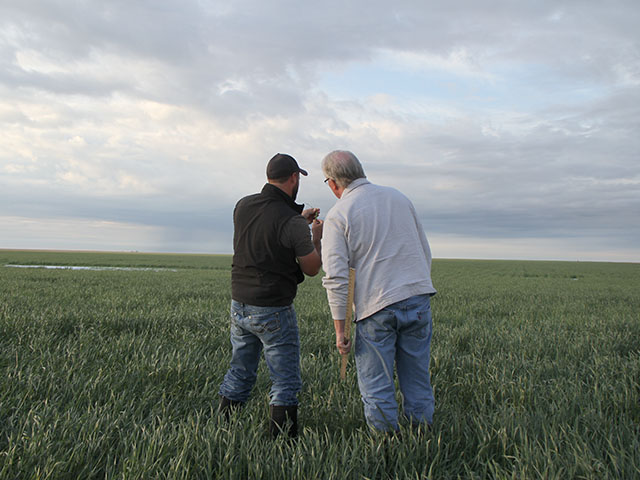