DECATUR, Illinois (DTN) -- Relationships are often "complicated" and that definitely describes the current situation with new herbicide traits. Farmers anxious to get their hands on new herbicide tools have been peppering speakers with questions during winter meetings.

EPA and China continue to hold trump cards on how and whether some of this new technology will be used on a commercial scale in 2016. If you lock in seed purchases containing these new traits and no other approvals come through, here's what you need to know regarding usage for this season:

-- Monsanto has announced it will sell Roundup Ready 2 Xtend soybeans in 2016. The cotton trait has been on the market since 2015.

-- NO approved dicamba herbicides are available for Xtend trait system yet. Monsanto and BASF both have low volatility formulations awaiting EPA clearance.

-- Use of existing dicamba (Clarity) herbicides over the top of the Xtend trait is prohibited.

What you need to know: While Monsanto received the much anticipated import approval from China earlier this month, there's no approved chemistry to go with the trait at this time. Seed companies are offering lineups of Roundup Ready 2 Xtend tolerant soybeans for sale in 2016 in the U.S. and Canada. Monsanto has announced 70 new Xtend varieties. DuPont Pioneer is releasing 30 new dicamba-tolerant soybean varieties for 2016.

Understand that unless EPA approves a dicamba herbicide for this technology, you are planting the equivalent of a Roundup Ready soybean. Soybean growers facing weeds with resistance to glyphosate and PPO-inhibitors have no postemergence rescue treatment options in a dicamba trait situation. Xtend cotton growers have the option of using glufosinate in glyphosate-resistant situations.

One of the advantages to dicamba tolerance is fewer plant-back restrictions in the spring. However, growers will not have that advantage in 2016 if there is no EPA approved dicamba product. Any burndown and/or preemergence dicamba or dicamba tank-mix combinations will be subject to current label restrictions -- whether planting a tolerant variety or not. In other words, after a soybean field receives an accumulated total rainfall of 1 inch following the burndown application, plant-back restrictions may be from 14 to 28 days depending on the rate applied.

Since Monsanto and BASF have yet to receive approvals for their low-volatility dicamba formulations, it is not known exactly what the label will require regarding buffer zone or crop setbacks and various other application requirements.

-- Enlist traits DO NOT have China approvals.

-- Enlist Duo herbicide, combination of 2,4-D choline and glyphosate, HAS approvals in U.S. on corn and soybean in 15 states.

-- Enlist Duo herbicide HAS NOT been approved by the EPA for use in cotton.

-- Dow AgroSciences has announced a 2016 launch of Enlist cotton, but growers DO NOT have access to an approved herbicide at this time.

-- Using existing 2,4-D herbicides over the top of cotton is prohibited. Burndown and pre-plant use of 2,4-D must follow current label plant-back restrictions.

-- Enlist corn 2016 launch is pending China approvals and uncertain at this time.

-- Enlist soybeans will be grown under an expanded program for seed production only in 2016.

What you need to know: While the Enlist Weed Control System has trait and herbicide approvals in the U.S. and Canada in corn and soybeans, the company is missing key import approvals from China. When China might issue approvals is unknown.

The only Enlist product on the "for sure" list for 2016 launch is cotton. However, Enlist Duo has yet to receive EPA clearance on the herbicide component for cotton. That leaves cotton growers with glyphosate and glufosinate tolerances to use postemergence. Burndown and pre-plant applications of 2,4-D alone or in tank mixes remain subject to labeled plant-back restrictions until Enlist Duo is approved for use in cotton.

EPA is still reviewing Enlist Duo's registration over possible synergistic qualities between 2,4-D and glyphosate in off-target plants, but a court decision in late January ruled the herbicide could be marketed. The label for Enlist Duo contains specific requirements as to nozzle selection, downwind buffer zones and eliminates aerial application.

There are additional new soybean herbicide trait technologies pending, but they are slightly further out on the calendar and are not being offered on a commercial scale in 2016. Bayer CropScience and MS technologies have developed Balance GT, a double herbicide-tolerant stack that will offer glyphosate and isoxaflutole (Balance Flexx) tolerance. Balance Bean will be the herbicide that matches this trait stack.

While all these new tools will have important roles in weed control in the future, the uncertainties make them tough to use in 2016, said University of Illinois weed scientist Aaron Hager.

"Soybean producers who are planning to rely on dicamba and dicamba-resistant soybean in their 2016 weed management programs for control of waterhemp populations resistant to both glyphosate and PPO inhibitors are encouraged to consider utilizing alternative strategies," he said.

"The Enlist soybean trait technology and the complimentary Enlist Duo herbicide formulation have received regulatory clearances, but without export approval to China it remains unclear how widely available these varieties will be in 2016," he added.

"Alternative strategies to manage weed populations with resistance to multiple soybean herbicides include rotating fields to a different crop, or planting soybean varieties resistant to glufosinate (i.e., Liberty Link). Please keep in mind, however, that regardless of the crop planted, the variety selected, or the herbicide applied, the most sustainable solution to the challenges of herbicide-resistant weeds is an integrated weed management system that utilizes both chemical and non-chemical tactics to eliminate weed seed production at the end of the growing season." 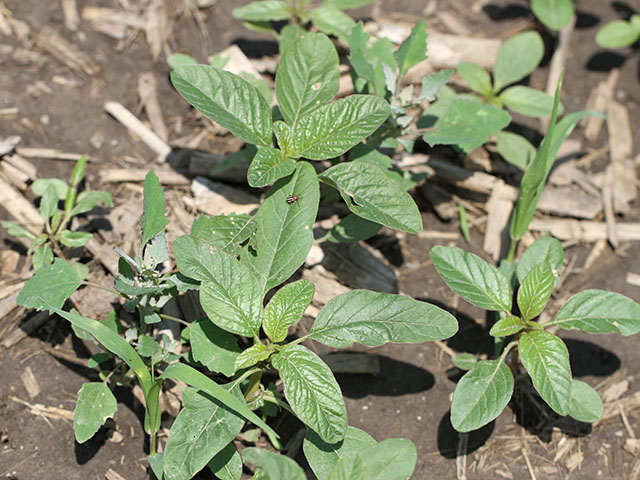