Farmers are borrowing more money to start off the 2023 growing season, according to a survey of bankers that the Federal Reserve Bank of Kansas City conducts on a quarterly basis.

The average size of non-real estate agricultural loans increased 20% from the previous year, boosting total loan volumes for the fourth quarter in a row. Interest rates on those loans have also risen sharply -- up 125 basis points from the previous quarter -- alongside higher benchmark interest rates. They're now at a 10-year high.

I recently attended The Executive Program for Agricultural Producers, better known as TEPAP, and many of the growers discussed strategies to avoid higher interest expenses on their operating notes. One farmer negotiated a lower rate with his bank, but also lowered the amount he could borrow, which helped the bank manage the amount of funds it had at risk. One of the presenters mentioned that some farmers with excess liquidity opted to self-finance operating expenses this year, even though they usually borrow. That would help them avoid paying interest when they didn't need to.

"Farm lending historically has increased alongside higher production costs, but strong liquidity likely has curbed some demand the past two years," Cowley and Kreitman said. "Production expenses across the farm sector have increased nearly 15% since 2020 while farm lending declined about 10%. Working capital on farms increased nearly 60% over that time, reducing borrowing needs for many producers and strengthening their ability to service debt."

The KC Fed compared average interest rates on non-real estate by the size of the bank, finding that financing charges have risen more rapidly among large farm lenders than small or mid-sized banks. The result is the difference in rates offered by varying size institutions was the lowest since 2007.

"Despite increasing sharply over the past year, farm loan interest rates remained near the recent historic average. Rates charged on both real estate and non-real estate loans reached the highest level in more than a decade but were near the average of the past 20 years," Cowley and Kreitman said. "The rapid rise has pushed financing costs up notably for producers, and the increase could be more pronounced for operations with higher debt needs." 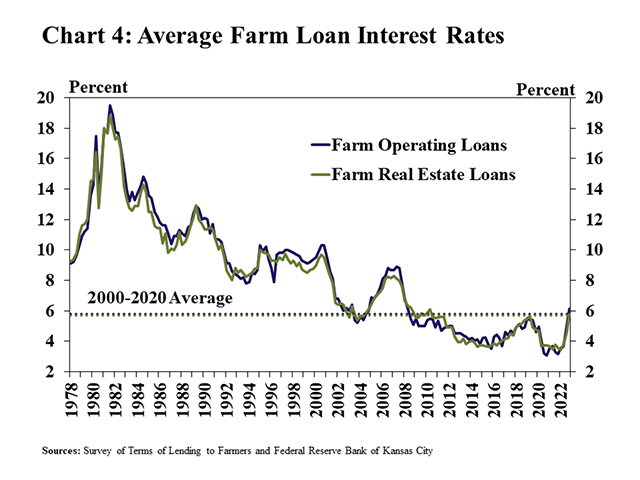