Farmers who need to give their landowners a crash course in Corn Belt economics might want to watch a rebroadcast of University of Illinois Economist Gary Schnitkey's one hour Sept. 7 webinar on cash rents. It's a sobering review of how deeply Midwest corn and soybean revenues have tanked since 2013, pushing typical Illinois cash renters deep into the red and necessitating continued cost savings for 2017.

For starters, Schnitkey dismisses the notion that Illinois's bumper yields will somehow offset 2016's lower prices. Grain farm income will look a lot like 2015 in 2016, and is setting up for a potentially tougher 2017, he says. Not only are prices stalled at depressed levels, but only fertilizer prices have offered much relief to corn production costs in the past year. It's corn's bloated cost of production that has made it less profitable than soybeans for the past five years.

To give you an idea of the scale renters need for 2017's budget cuts, Schnitkey assumes operators will negotiate an average reduction of $23 per acre cuts in cash rent, a feat that has never occurred in Illinois and compares to the average $7 drop in 2016. They will also need to achieve trend-line yields and shave their nonland costs by another $27 per acre for corn and similar for soybeans. For a high productivity farm in central Illinois, that would still mean a $65 per acre loss on corn, although soybeans could squeak by with a small profit.

Another way to share the bad news with landowners: To get to breakeven (zero return for a year's worth of work), a typical Illinois renter could afford to pay $200 cash rent on excellent land with a corn yield potential of 200 bpa. That's the same ground professional farm managers say they charged $325 per acre in 2016, so most growers would be losing sizable amounts of cash unless there are deep concessions for 2017.

"Obviously, we're a long way from those [break-even] levels," Schnitkey says. But given the shock in grain revenue the past three years, landowners shouldn't be surprised when farmers ask for reductions in rents this year.

"How you feel about it is a good question," Schnitkey says. "Obviously cuts aren't desirable."

On the other hand, how many years in a row can an Illinois farmer expect to survive losing $65 or $100 per acre annually? Somehow, the cash rents of yester year just won't compute. 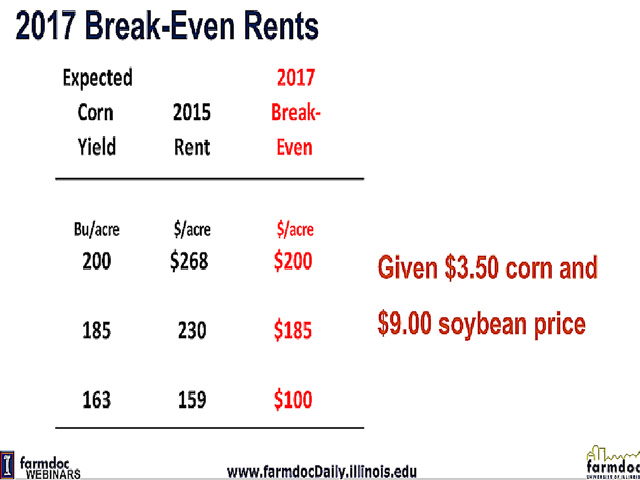 JONATHON EATON
9/20/2016 | 2:07 PM CDT
Maybe people need to learn to not promise to pay what they cannot afford. It did not take a crystal ball to know a down turn would come, and those who overspent to win today but lose tomorrow did not learn much from past generations mistakes.
RSimpkins1489533924
9/9/2016 | 6:32 AM CDT
What about producers and investors that have paid Hugh amounts for land.?They can't change their land cost much. Banks are still going to want their money. I think these guys are in more trouble than renters! Investors want 3-4 percent on their money, so on 10,000 dollars that's 300-400 an acre.
All Blogs