Given dire forecasts for corn and other commodities' multi-year profit abyss (see my last post), it's worth hearing how some of agriculture's wise men plan to adapt to the new economics of crop production. We did just that at the final session of the DTN Ag Summit in Chicago last week. Here are some of the more provocative strategies shared by commercial growers from North Dakota, Iowa, Texas and Nebraska. Their premise is that retailers--and some land owners--will need to recognize that crop producers can't continue to pay 2013 costs when corn hovers at 2007 price levels.

--Give your suppliers a goal. Ben Riensche, an 11,000-acre Jesup, Iowa farmer, has asked all his suppliers for bids at 80% of last year's prices. Instead of splitting his seed needs across companies, "whoever gets to the 20% savings first gets the whole taco," he says. "I've gotten lax about relationship buying over the past 10 years. That's really pushed up my cash flow requirements and meant suppliers have gotten used to operating on our money. Payment terms have been advanced to the point that we are financing their inventory. This trend needs to be adjusted back."

--Let the CRP cull your least-profitable land. Chris Johnson, who farms 3,300 acres near Great Bend in southeastern North Dakota, is encouraging one of his landlords to enter about 100 acres of high salt land into the Conservation Reserve Program. It was land where he always worried about losing money due to low yields. Because of the lag in government rental rates, Johnson thinks the CRP pays better cash rent than he could afford, so it's a win-win for both the tenant and the owner.

--Split decisions on rent reductions. Johnson's cash rents have kept pace with his local market but never caught fire like fiercely competitive Iowa rates. That meant he didn't ask for concessions in 2016, even though land costs will ultimately need to adjust. "I don't feel comfortable asking my elderly fixed-income land lady to take a cut when I have $1 to $2 million of equipment in the shed," Johnson says.

Riensche, who farms in the hotbed of Iowa cash rents, took another approach. He gave about 20% of his land owners notice that he would need to adjust rent levels to keep farming the properties in 2016; after face-to-face negotiations, all but a handful will be on board for next season.

--Take advantage of supplier incentives. Credit packages are back big now that operating linesare on the rise. Seed costs are only down 5% to 10%, several operators say, not enough to match the 40% plunge in corn prices in recent years. DTN's national average prices for potash and urea are running near a 7-year low; most nutrients are running at least 10% below year ago levels,DTN's latest surveys show.

Johnson's local co-op is offering interest-free financing on seed and certainchemicals and fertilizers with no payments until January 2017." Fall applied 2015 fertilizers are interest free until March. Pioneer and John Deere Financial also offer attractive terms with packages like "prime plus 1%" or 0% financing for several months.

--Strike oil on diesel and propane's collapse. Johnson and Don Cantrell of Merna, Nebraska, both felt like bargain hunters in the last few weeks. Full 7,200-gallon transport loads of red diesel for farm use cost $1.32/gallon, the cheapest Johnson has paid since 2004. It's also less than half what he paid last year.

--Exploit the used machinery glut. So your dealer doesn't want your super-sized sprayer, cotton picker or year-old combine anymore? "If you need new equipment, don't bother trading. Buy a spare from the used market," says Iowa farmer Riensche. When his dealer wanted $200,000 to trade in a recent model combine, he shopped the online auctions instead. He expects to buy a John Deere S670 with 400 hours for about $160,000 and simply add it to his fleet. He'll operate one and keep one in reserve.

--Practice good crop insurance habits. Key is to maximize your yield history in 2016, because price guarantees aren't likely to cover your production cost. With some banks lending up to 65% of your revenue insurance guarantee, maximum coverage counts. That's especially critical to growers still reeling from multi-year droughts in Texas, Oklahoma and Kansas this past decade.

Beeville, Texas farmer Matt Huie deployed the new Yield Exclusion option this year, raising his overall 2015 crop insurance APH 30%- 40%, especially in corn and cotton. (YE erases yield history when your county, or an adjacent county, experienced a yield decline of 50% or more. Ironically, it also worked well in the Corn Belt where operators wanted to erase their 2012 drought yields.) Huie also promotes the use of trend-adjusted yields and considers enterprise units to save money. They receive higher federal subsidies to encourage participation than optional coverage.

--Get financially fit. Nebraska irrigated crop producer and cattleman Don Cantrell owned land free and clear in the 1980s, but when he needed cash and wanted to mortgage real estate, 12 banks turned him down. Today he makes sure he and his son keep enough working capital so they can jump on opportunities. Lenders like to see 30% of your gross revenue as working capital but he keeps plenty on hand. His Plan B always includes deciding in advance what parcel of land he'd be willing to sell, in case things don't work out as planned.

"I have a Warren Buffet philosophy," Cantrell says. "Borrow as much as you can against land. Keep your working capital fluid. When you spend profits, only invest in appreciating assets."

Of all regions of the Grain Belt, parts of Texas may face the toughest prospects in 2016. Severe and repetitive drought this past decade eroded equity at a time when Midwesterners were salting away profits. Sorghum prices that once hit $2.30/bu. over Chicago have come back to earth. The demise of the cotton program in the new farm bill also leaves growers with little for a safety net.

"For the 2014-crop, we got no direct payments and no PLC payments. ARC doesn't work in Texas because county averages are so low," Huie explains. "In south Texas, word is that as much as 90% of the producers are ending 2015 with some sort of carryover losses."

Young farmers with be the first casualties, because they have the least reserves left, Huie says. "Established farmers are like Exxon--they have the equity to withstand $30 oil. But young farmers feel like wildcat oil drillers who have gone from a boom to a bust cycle," he says. "We're tightening up every creative way we can to cut our budgets." 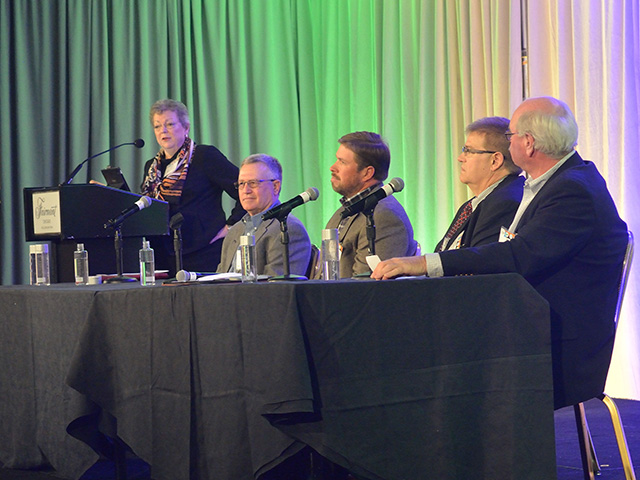 andrew mohlman
12/18/2015 | 8:10 AM CST
There would not be enough in six months we would be begging China to sell some back to us and the market likes to act like we have so much surplus my crack pay us fairly people quit stealing.
Raymond Simpkins
12/18/2015 | 7:51 AM CST
These are your wise men? One has $660 per acre in equipment,we farm with half that. Good luck getting Pioneer to lower the price of a bag of seed corn a $100. And why was that poor ground ever taken out of CRP? Because of greed!! Potash won't stay lower for long,they are shutting down mines now to create demand. So why as farmers are we to stupid to do that? Why would you plant corn when you say an Iowa farm with 250 bu. corn lost $300 an acre in 2015. Might better leave it all lay idol and not lose anything,at the same time creating a shortage.
All Blogs