The Brotherhood of Railroad Signalmen (BRS) became the second union, behind the Brotherhood of Maintenance of Way Employes Division-International Brotherhood of Teamsters (BMWED), to vote against ratification of the national tentative agreement, PRB 250, reached on Sept. 15, 2022, by union leaders and the U.S. Class I railroads. The BRS stated that of the ballots received, 60.57% of their members voted "No/Do Not Approve."

The BRS negotiated this round of bargaining as a member of the Coordinated Bargaining Coalition (CBC) and later the United Rail Unions, which eventually comprised all rail unions with members under National handling. Collectively, the coalitions represented over 115,000 rail workers.

Despite a cap and freeze on healthcare with no negative changes to the plan, general wage increases of 22% (24% compounded), and an agreement to bargain on the responsibility pay that Signalmen have been trying to get since 2011, BRS members spoke loudly and clearly that their contributions are worth more, particularly when it comes to a basic right of being able to take time off for illness or to prevent illness, noted the press release on their website.

BRS union President Michael Baldwin said that "For the first time that I can remember, the BRS members voted not to ratify a National Agreement, and with the highest participation rate in BRS history. I have expressed my disappointment throughout the process in the lack of good faith bargaining on the part of the NCCC, as well as the part PEB 250 played in denying BRS members the basic right of paid time off for illness."

Baldwin added, "The NCCC and PEB also both failed to recognize the safety-sensitive and highly stressful job BRS members perform each day to keep the railroad running and supply chain flowing. Without Signalmen, the roadways and railroad crossings would be unsafe for the traveling public, and they shoulder that heavy burden each day. Additionally, the highest offices at each carrier, as well as their stockholders, seem to forget that the rank and file of their employees who continued to perform their job each day through an unprecedented pandemic, while the executives worked from home to keep their families safe."

The National Carriers' Conference Committee (NCCC) in a statement said, "We are disappointed that the Brotherhood of Railroad Signalmen (BRS) has failed to ratify the recent tentative agreement with the nation's freight railroads, delaying the benefits of the tentative agreement for BRS-represented employees and further extending resolution of the bargaining round with BRS.

"The tentative agreement, which implemented the recommendations of Presidential Emergency Board (PEB) No. 250, included the largest wage package in nearly five decades, maintained rail employees' platinum-level health benefits, and added an additional day of paid time off."

The NCCC and BRS have agreed to maintain the status quo period (current rates of pay, rules or working conditions remain intact) until early December. As such, the failed ratification does not present risk of an immediate service disruption, said the NCC.

On Oct. 19, NCCC responded to BMWED, the first union to vote no, saying, "The latest BMWED request for additional benefits is similar to a proposal which was carefully considered and rejected by President Biden's Presidential Emergency Board (PEB) and comes weeks after the union entered into a tentative agreement that included the most generous wage package in almost 50 years of national rail negotiations."

BMWED National Division President, Tony D. Cardwell, released a statement on Oct. 26, addressing members' concerns surrounding the current National Bargaining impasse. "In hundreds of calls, emails and texts, members provided numerous reasons they voted against the agreement, but the common thread was the lack of paid sick days," said Cardwell. "Based on this feedback, we created a reasonable proposal asking that our members be provided a basic package of sick days that is a common benefit in nearly every other industry in the United States.

"We provided our proposal to the railroads, but they rejected it and indicated they would not consider any proposal that veers from the PEB recommendations. BMWED leadership has gone on a campaign of informing the public and lawmakers of the railroad companies' unwillingness to provide basic sick days while carrier executives bow to Wall Street's continued desire for more than its fair share."

Cardwell added, "As long as they take that stance, all we can do is encourage solidarity and prepare to exercise self-help." (For the union, self-help means engaging in activities that may inflict economic harm on a company up to and including a strike.)

Here is a link to the entire BRS statement: https://www.brs.org/…

Here is the entire Oct. 26 statement from BMWED:

Here is the entire Oct. 26 statement from NCCC to BRS: https://raillaborfacts.org/…

Here is the entire Oct. 19 statement from NCCC to BMWED: https://raillaborfacts.org/…Mary Kennedy can be reached at mary.kennedy@dtn.com 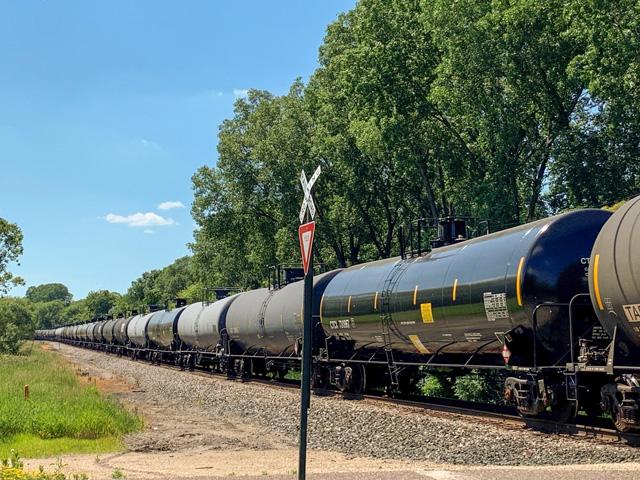