The low water level of Germany's Rhine River is causing problems for inland shipping, agriculture and coal-fired power plants. The lack of freight capacity on the Rhine affects the entire economy, as many other goods cannot be transported or delivered.

The Rhine River, which runs northwest from Switzerland through Germany, France, and the Netherlands into the North Sea, is a major petroleum product transportation corridor. The navigable portions of the river connect the major refinery and petroleum trading centers of Amsterdam and Rotterdam in the Netherlands and Antwerp in Belgium, collectively known as the ARA, to inland markets, according to the U.S. Energy Information Administration (EIA). Approximately 400,000 barrels per day (bpd) of oil products are transported on the Rhine.

"Alternatives to shipping products on the Rhine River are costly. Europe's petroleum product pipeline infrastructure is not as extensive as in the United States, leaving relatively more expensive transport options such as rail and long-distance trucking as the only alternatives," said the EIA.

According to Germany's Federal Waterways and Shipping Administration (WSV) water levels at Kaub, west of Frankfurt, are predicted to drop to 30 centimeters (11.8 inches) in the coming week. At that level, the river becomes virtually impassable for many barges/ships, and traffic may be stopped altogether. The Kaub gauge is the most important water level measurement station in the Middle Rhine, according to Deutsche Welle (DW), Germany's international broadcaster.

Inland shipping must pass through this choke point to get to the Upper Rhine and access southwestern Germany's industrial centers, like Mannheim, in the German state of Baden-Wurttemberg.

Similar to what happens on the Mississippi River when water levels fall close to zero-gauge, barge/ship drafts are being reduced. That means moving less product at a higher cost. HGK Shipping, Europe's largest inland shipping company, said in a post on their LinkedIn page, "The freight has to be distributed to more and more ships and the freight cost increases. Half freight means a second ship and with that the freight costs automatically doubled."

"In addition, even if the water levels are not yet as low as in the hot summer of 2018, when historic lows were reached, diesel prices are significantly higher today than they were then," said Martina Becker, who is responsible for heavy shipping at the HGK Group.

The current level noted above hasn't yet fallen below the lowest figure ever recorded on the Rhine, which was in October of 2018. That measurement then was 25 cm and was taken from the same reference point in the river.

I was in Germany in October 2018 and traveled to the city of Bingen am Rhein, in Mainz-Bingen district in Rhineland-Palatinate, southwestern Germany. Bingen is a port at the confluence of the Rhine and Nahe rivers. I saw barges moving in the middle of the river, but drought was clearly visible along the dried-up shoreline, as you can see in the photo accompanying this article. The ferry was still running, but eventually about half of Germany's river ferries stopped running in fall 2018, according to the Federal Waterways and Shipping Administration. Sandbars never seen before emerged in many places, and in some spots, undetonated bombs and grenades that had been submerged since World War II surfaced.

Dubbed the great drought of 2018, it ended up being a disaster across Germany not just for much of the river shipping industry, but also for most farmers. With virtually no rain and record-high temperatures since April that year, grain and oilseed harvests were 50% to 70% less than normal, and in other places, nothing was harvested at all.

Now, in 2022, drought has once again struck farmers not just in Germany but in much of the E.U. "From France to Germany and Hungary to Romania, a broad range of crops have been withering through the summer's heat waves, threatening to drive food prices in the European Union higher and reduce supplies from the world's largest exporter of agricultural and food products," said Gro Intelligence. "The lowest soil moisture levels in at least a decade are weighing on sugar beets and potatoes -- with France, Germany, and Poland accounting for most of these crops. And in Romania, the EU's biggest producer of sunflowers, 'moderate' drought levels point to a weaker harvest that may increase demand for EU vegetable oil imports."

The head of Germany's largest farmers group said dry and hot conditions will likely mean heavily reduced harvests in some regions. "Crop yields in some German regions are likely to be significantly lower than expected," the president of the German Farmers Association (DBV), Joachim Rukwied, said on July 29. "Overall, the harvest nationwide is expected to be lower, with Germany's hot summer and lack of rain having left huge swaths of arable land parched."

Meanwhile, if the Rhine River becomes impassable, anything moving by barge/ship, including agriculture and key energy products, will be left homeless, paralyzing the already stressed economy in Germany. 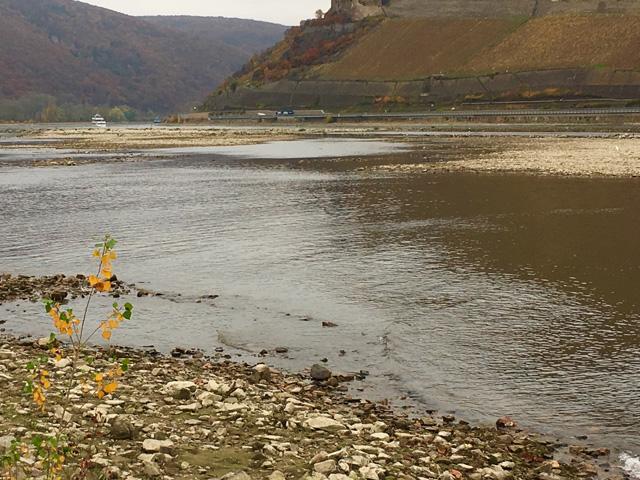