As July 18 approached, rail shippers throughout the United States were getting nervous that, unless President Joe Biden became involved in the stalled rail contract talks, union workers could stage a walkout. In turn, this would create more turmoil in an already fragile shipping industry.

That date would mark the end of first 30-day cooling off period following the unions' rejection of a binding mediation offer from the National Mediation Board and, had progress in negotiations been stalled, a rail worker strike could have taken place.

Then, on July 15, a Presidential Emergency Board (PEB) was created by Biden for the purpose of helping the tumultuous railroad contract negotiations that have been ongoing since January 2020 without a hint of a settlement.

Prior to that executive order, the Brotherhood of Locomotive Engineers and Trainmen (BLET) on July 12 tallied the ballots cast in its first nationwide strike vote over national contract negotiations since 2011. In a showing of solidarity and unity, 99.5% of the participating members voted to authorize a strike had such action become legal and necessary to secure a contract worthy of their consideration. The formation of the PEB takes effect today and will now delay any freight rail work stoppage or strike for 60 days.

"The BLET members who voted to strike have worked for incredibly profitable railroads for over three years without a wage increase," said BLET National President Dennis R. Pierce. "They were considered essential workers during the height of the pandemic, forced to work day in and day out or be fired, with no financial recognition for doing so. All the while, the rail carriers' 'profits over all else' mentality completely saturated our contract negotiations. Let's be clear, in our third year of negotiations, the rail carriers have never made a contract proposal to our union that their employees, our members, would accept. Not once." (https://ble-t.org/…)

In a joint statement in response to the Executive Order, the 13 rail unions, representing approximately 140,000 railroad workers, stated that, "The rail unions remain united in their efforts, and are now working together in preparation of a unified case representing the best interests of all rail employees before the PEB. Our unified case will clearly show that the unions' proposals are supported by current economic data and are more than warranted when compared to our memberships' contribution to the record profits of the rail carriers." (https://ble-t.org/…)

The National Carriers Conference Committee (NCCC), which represents the nation's freight railroads in national collective bargaining, and will also do so in the PEB proceedings, issued a statement regarding the appointment of a PEB saying, "We are pleased that President Biden has established a PEB to assist the parties in bringing the current round of national rail negotiations to a successful conclusion. It remains in the best interest of all parties and the public for the railroads and rail labor organizations to promptly settle the bargaining round on reasonable terms that provide employees with prompt and well-deserved pay increases and prevent rail service disruptions.

"Throughout the bargaining round, the railroads have worked to thoughtfully address issues raised by both sides and have offered pay increases that are consistent with labor market benchmarks and reward rail employees for their essential work. The railroads' proposals would continue to place rail employee pay and benefits among the best in the nation."

NCCC added, "We look forward to demonstrating to the PEB how a recommendation based on our proposals would appropriately reward rail employees' hard work and skills while best positioning the industry to grow and compete for traffic in the nation's highly competitive freight marketplace. We also wish to thank the National Mediation Board for its assistance during this bargaining round."

Upon the formation of the Presidential Emergency Board, the Railway Labor Act (RLA) imposes a 30-day "status quo" period, during which the Board will receive written submissions and hold hearings. During that time, the parties are not permitted to exercise self-help (engage in a lockout or strike). The PEB would be required to issue its report within 30 days of its appointment.

Once the report is issued, the RLA mandates another 30-day cooling off period as the unions and the carriers attempt to negotiate an agreement based on the PEB's recommendations. If no agreement is reached at the end of that last 30-day period, then all restrictions on self-help are removed.

At that point, the RLA has run its course. If no agreement has been reached, either side becomes free to act in its own economic interests via a work stoppage (or strike) by labor, a lockout by management or unilateral implementation of management proposals (that generally would force a work stoppage).

The RLA was passed in 1926 to govern the industry's collective bargaining process. The RLA was one of the earliest federal laws to guarantee workers the right to organize and choose representatives without interference or coercion from their employers. (http://www.pennfedbmwe.org/…)

For more background on the situation see DTN's June blog "Years of Contract Negotiations Between Railroads and Workers Stall": https://www.dtnpf.com/….

Here is a link to the bargaining status quo, as of July 15: https://raillaborfacts.org/… 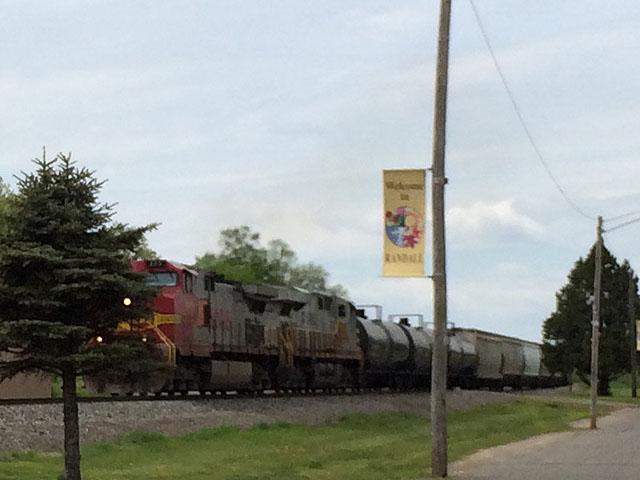