A $1.5 trillion infrastructure proposal by the House of Representatives was approved on July 1, 2020. The partisan H.R.2 Moving America Forward Act will address the growing backlog of maintenance and repairs needed for the country's roads and bridges. It will also invest in public transit systems, railroads and airports; water systems, schools and broadband internet systems.

In a June 30 press release, the House Committee on Transportation and Infrastructure published comments by Peter DeFazio (D-OR), during the Rules Committee meeting on H.R.2 The Moving Forward Act. "America's infrastructure is in crisis. Our system of roads, bridges, public transit, rail, airports, ports and water systems are badly outdated, causing stress and safety hazards for our citizens, strain on our economy," said DeFazio.

"As chair of the Transportation and Infrastructure Committee, I'm particularly focused on investing in our roads, bridges, transit, rail, and water systems. In the Moving Forward Act, we do that by modernizing the crumbling roads and bridges we already have; investing more than $100 billion in transit to put more zero-emission buses on the road, add new routes and provide more reliable service; tripling Amtrak's funding; funding the essential dredging and upkeep of American harbors, ports and channels to keep cargo moving, and investing in new wastewater infrastructure to encourage efficiency and affordability, and help communities address stormwater needs, preventing pollution in local rivers," added DeFazio. Here is a link to his entire testimony which outlines details and other comments: https://transportation.house.gov/…

However, don't hold your breath on this latest action. According to Transportation Today, members of the Senate Committee on Environment and Public Works (EPW) agreed on the urgency of an infrastructure bill, while conceding a rapidly-moving House version stands no chance of being approved by the Senate. Senator John Barrasso (R-WY), chairman of the Senate EPW Committee, slammed the House bill, saying, "There's nothing bipartisan about it. It's completely partisan." Senate Majority Leader Mitch McConnell (R-KY) said on the Senate floor that he would not take up the House bill. McConnell scored the House package as a "1,000-page cousin of the Green New Deal, masquerading as a highway bill," during his remarks on July 1. The White House threatened to veto it if it were to be passed by both chambers, according to Transportation Today.

The U.S. Chamber of Commerce sent a letter to the House of Representatives, stating it cannot support the partisan Moving America Forward Act and urges bipartisan solutions to address the nation's urgent infrastructure needs. Neil Bradley, executive vice president and chief policy officer for the U.S. Chamber of Commerce, stated in the letter, "With historic unemployment and tremendous unmet infrastructure needs, now is clearly a time for bold and ambitious action. There is nothing bold, however, about voting on a bill that does not and will not have the bipartisan support needed to become law."

Here is a link to the full letter to the House: https://www.uschamber.com/…

WINDOW IS CLOSING FOR SIGNIFICANT LEGISLATION ON INFRASTRUCTURE

"I am encouraged any time infrastructure receives attention among policymakers," said Mike Steenhoek, Executive Director Soy Transportation Coalition, in an email to DTN. "However, the reality in Washington, DC, is that there is a limited window of opportunity to achieve meaningful legislation on infrastructure and other areas of importance. It is therefore essential that both Democrats and Republicans work together on the front end to develop a transportation bill that has the potential of becoming passed.

"Our nation's state departments of transportation strongly urge Congress and the Administration to replace the current FAST Act law with a new five-year bill prior to Sept. 30 so that states can have the confidence and predictability from the federal government in order to proceed with their specific transportation plans. We join in this call," said Steenhoek.

The Army Corps of Engineers is in the process of rehabilitating five of the eight locks and dams along the Illinois River. The Illinois River is one of the key arteries for the agricultural supply chain. According to the U.S. Department of Agriculture, in 2019 over 6.5 million metric tons of down bound soybeans and grain passed through LaGrange Lock and Dam, the final Illinois River lock before the confluence with the Mississippi River.

Here is more information in my June story on the Illinois River closure: https://www.dtnpf.com/…

"It does not require a professional engineer to be able to diagnose that it is not a matter of 'if' there would be future mechanical failures at some of these lock and dam sites. It is more a matter of 'when' they occur. The crumbling concrete and widespread rust at a number of these sites, particularly LaGrange Lock and Dam, are evident to even a casual observer," said Steenhoek.

"We appreciate the Army Corps of Engineers for providing advanced notice of this work so that agricultural and other shippers could develop alternative arrangements during this period when the river is essentially closed for barge transportation. We also appreciate how this work will occur concurrently, rather than subsequently, so that the length of the river closure will be as brief as possible. Unpredictable spring weather prohibited the work from getting scheduled too early in the year. The barge shipping surge due to the fall soybean and grain harvest motivates having the work completed as early as possible," added Steenhoek.

I am trying once again to feel positive about this latest attempt at an infrastructure bill, but my common sense and past history of failed attempts makes me remain a pessimist. Each time I look at some of the reports of the dangers lurking on our river system and bridges, I shudder at the thought of another failed bridge crumbling apart like the I-35 bridge in downtown Minneapolis. Many of us who were just leaving work on that day saw the aftermath of the collapse with our own eyes. I will never forget the catastrophe that took place that evening of Aug. 1, 2007, that forever changed the lives of the 145 survivors and the families of the 13 people who died.

We need the federal government to get along and to come up with a plan to save our bridges and rivers and all U.S. infrastructure before, God forbid, we have another disastrous bridge collapse.

Here is a link to America's most endangered rivers of 2020: https://endangeredrivers.americanrivers.org/…

Here is a link to the American Society of Civil Engineers (ASCE) report card, which also breaks out grades for each state in all infrastructure categories: https://www.infrastructurereportcard.org/… 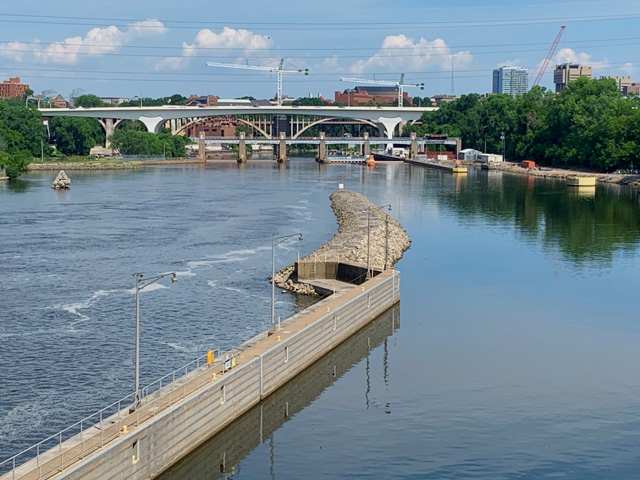