While farmers continue to struggle with the harvest, perhaps the bright spot in this frustrating season was the DTN national average soybean basis. During the third week of October, the DTN national average basis climbed out of the cellar and above the five-year minimum average basis, surpassing the five-year average that week. Since that time, the soybean basis has continued to move higher, which is a phenomenon for a harvest-time basis, especially soybeans. Here is a story I wrote on Oct. 28 giving insight as to some of the reasons for the newfound basis strength: https://www.dtnpf.com/….

As October turned to November, the DTN national average basis has still been a rising star. However, even with the strong basis, many farmers are incurring drying costs and many are taking other quality discounts that can chip away at their final price and year-end profit.

After getting harvest comments from various Midwest farmers and elevator managers -- some with lower yields and quality issues -- one can see why soybean basis has remained strong for this time of year.

Ryan Wagner, Wagner Farms, Roslyn, South Dakota, told me that they usually like to start soybean harvest around the last two weeks of September, but got off to a late start this year because the beans weren't quite ready yet.

"We did manage to get a few acres done Oct. 8 and Oct. 9, but then a snowstorm and rain that followed kept us out of the field until Oct. 18. Lodging due to the snow was minimal, but the saturated ground conditions, high-moisture soybeans, sloppy gravel road conditions and road closures due to flooding made it a challenge," said Wagner.

Wagner said that the cold snap in late October helped to "float machinery across fields without making a huge mess but that didn't help the soybeans dry down at all, and we ended up sending about half of them through the dryer. We were able to combine a few loads one day with moisture content around 13%, but for the most part, they were in that 15% to 18% range, right up until we finished on Nov 12. We did see some well-drained areas yielding fairly well, but still below potential, and field averages were well below APH (actual production history) due to large areas that were low yielding or completely drown out."

"Harvest was delayed until early October due to late planting dates and wet conditions that remained into this fall and then even more rain," said Cory Tryan, grain department manager Alton Grain Terminal, LLC Hillsboro, North Dakota. "Some areas were able to poke around on high ground and get some beans harvested mid-October for a couple days as some farms were still trying to get done with their wheat. Other areas finally started the last three days of October when some of wettest fields began to hold equipment up.

"Another big rain saturated fields to the max and left a lot of water standing. The majority of harvest was finished between Nov. 6 and Nov. 15 when an early November freeze up allowed equipment back into the fields. This same hard freeze is when the beet harvest here was shut down for good. We still have a small amount of beans in the field but would say 96% complete now," said Tryan.

Tryan also noted that the entire harvest was over the moisture limits and needed drying, but noted it wasn't as wet as the second half of harvest 2018, which was full of snow and at 19% to 21% moisture.

"The majority of this 2019 crop came off 15% to 18% moisture," Tryan said. "We still have a half-million bushels in house on fans to get through the dryers. Farmers have hauled more beans off the field than expected with the lower prices due to the higher moisture with an even mix of storing, basis contracts or just flat pricing it."

Keith Brandt, general manager of Plains, Grain and Agronomy in Enderlin, North Dakota, said: "About 5% of our soybeans are waiting to be harvested, and we need frozen ground to get the majority that are left. Our yields are off 10 bpa (bushels per acre) to 12 bpa from last year and it took a good field to average over 40 bpa. The low areas were thinned out from too much rain through the growing season. We dried about 95% of the beans that we have dumped. It is tough to get anyone to sell 2020 harvest delivered beans, but we are at levels that our best-priced contracts for 2019 harvest delivery are."

I checked in with Lyn Wessel who farms in Watonwan County, Minnesota, mid-August to hear how his crop looked as southern Minnesota was getting beat up by rain and storms most of the summer. "I already had 20% drowned out on two fields, plus early hail damage," said Wessel. When I asked him before Thanksgiving how harvest was going, he said, "considering my beans were planted the second week of June with a 290HP track tractor pulling a 20-foot drill on soil not even close to fit, they were better than expected at 44 bpa to 50 bpa verse 60 bpa to 70 bpa normally."

Peter Ness, Ness Farms, Sharon, North Dakota, said: "What started out with a promising crop of soybeans when we started harvest on Sept. 24, went south in a hurry. We had daily rains and muddy fields that gave away to an Oct. 9 through Oct. 11 blizzard, which dropped 20 inches of snow on top of the already saturated soil. November came and the ground finally froze hard enough for combine and grain cart travel, but the damage was obvious. One-third of the bean crop had been lost to lodging, pods breaking open and plants just snapping off, with plants frozen in the water. In addition, all the beans came off the field wet at 14% to 18% moisture. We finally finished the beans on Nov. 9 and moved on to what was left of our sunflower crop."

"We had a pretty decent soybean harvest and appreciated the beans we had above the Missouri River flooding," said Quentin Connealy, Tekamah, Nebraska. "Mid-May planted beans, which were put in before the long, wet spell, performed very well. Seed treatment proved to help their emergence during the wet spell and it showed during harvest. Many beans were planted June 8-10 in this area, and they were impressive considering how late they were planted and our dry spell after a wet spring. Most ended up being in the 52 bpa to 58 bpa range, which impressed me.

"Harvest went fairly smooth with not many rain days; maybe only a day or two. Nevertheless, short days with tough beans in the morning made it feel like a long soybean harvest. We started soybean harvest a little late on Oct. 15, which we usually start up around the end of September to beginning of October. We finished up soybean harvest Oct. 19, a touch late for the area," added Connealy.

"We started soybean harvest a little later than usual because we planted late and everything was behind," said Doug Saathoff, West Fork Farms Inc., Trumbull, Nebraska. "We got rolling around the 25th of September and finished up with soybeans on the 15th of October. We had some rain delays in there, but overall, the weather wasn't too bad. Our yields were down significantly from previous years. I would say they were down 20% to 30%. It was disappointing to see that, because they did look good all summer. Some fields did receive some hail and wind in August, but the biggest reasons yields were down was too much rain over the summer, lack of sunlight and too cool during August.

"Beans like dry feet and sunshine, and we definitely did not have that this summer in my area," added Saathoff, who is a director on the Nebraska Soybean Board and the Nebraska Rural Radio Board.

"As far as harvest went, I'm almost afraid to say because I know of all the struggles others went through in other areas, but we had a pretty good harvest here in southwest Iowa," said Mike Carlson, Red Oak, Iowa. "We didn't have too many weather delays like 2018, thankfully, because I don't think I could have handled another fall like that. I didn't even get stuck this year! Once again, I expected the beans to be better than they were; however, our beans did yield a few bushel better than a year ago, which puts them a little better than the five-year average."

Tim Dufault, who farms in Crookston, Minnesota, told me empathically, "Soybean harvest 2019 sucked! It was 31 days from start to finish. We only actually harvested 13 of those days, and some of those days might have been only one load or one round in the field. We received over 10 inches of rain in September and October. That is over half our annual precipitation. The early cold temperatures helped with harvest because frozen ground was the only way the crop was going to get harvested.

"Despite all the weather troubles, yields overall were good. I have heard yield reports from the upper 30s to low 50s bushels per acre. However, the beans came off wet and we saw many at 14% to 15% moisture. One quality issue that popped up in a few locations in my area was discolored beans. No one is sure yet as to why, but the thought is that those varieties were susceptible to some viral or bacterial infection," added Dufault.

"Every single farmer I have talked to within a large radius of my area says this was the worst fall harvest season. Every crop was a struggle; from wheat to dry edible beans, sugarbeets, potatoes, sunflower to corn," added Dufault.

"This was one of the more difficult soybean harvests I can remember (not to be confused with the difficult spring wheat harvest of August through September or the difficult corn harvest of November through to be determined)," added Wagner. "Harvest 2009 was also an extremely tough year and has been a swear word around here ever since, but I think 2019 will replace it now." 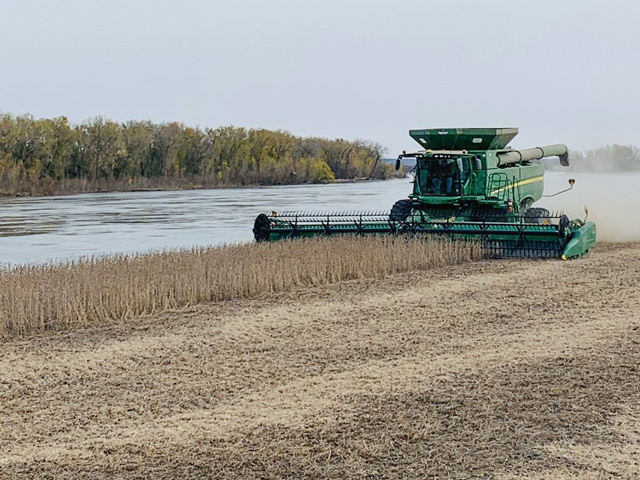