The U.S. Department of Transportation's Federal Motor Carrier Safety Administration hours of service rule has been in the news for several years as the agency tries to fine-tune the rule in hopes of easing some restrictions for the trucking industry. Meanwhile, safety groups continue to fight any changes to the rule.

Recently, a public comment period on proposed changes to the hours of service rule ended. The thousands of comments that were submitted show the agency has a difficult task ahead of it in weighing the pros and cons of its proposed changes before it reaches a final decision.

First adopted in 1937, FMCSA's hours of service (HOS) rules specify the permitted operating hours of commercial motor vehicle drivers (CMV). In 2018, FMCSA authored an advanced notice of proposed rulemaking (ANPRM) to receive public comment on portions of the HOS rules to "alleviate unnecessary burdens placed on drivers while maintaining safety on our nation's highways and roads," the FMCSA noted on their website. In response, the agency received more than 5,200 public comments.

Then, on Aug. 14, 2019, the agency issued another ANPRM based on the detailed public comments. FMCSA's proposed rule on hours of service offers the following five key revisions to the existing HOS rules.

1. Increase safety and flexibility for the 30-minute-break rule by tying the break requirement to 8 hours of driving time without an interruption for at least 30 minutes, and allowing the break to be satisfied by a driver using on duty, not driving status, rather than off duty.

3. Allow one off-duty break of at least 30 minutes, but not more than 3 hours, that would pause a truck driver's 14-hour driving window, provided the driver takes 10 consecutive hours off-duty at the end of the work shift.

4. Modify the adverse driving conditions exception by extending by 2 hours the maximum window during which driving is permitted.

5. Change the short-haul exception available to certain commercial drivers by lengthening the drivers' maximum on???duty period from 12 to 14 hours and extending the distance limit within which the driver may operate from 100 air miles to 150 air miles.

The agency then offered a 45-day comment period on the proposed rule changes. The comment period ended on Oct. 21, after a 14-day extension to the original end date, with over 2,600 comments received.

FMCSA said on its website that the proposal "is crafted to improve safety on the nation's roadways. The proposed rule would not increase driving time and would continue to prevent CMV operators from driving for more than 8 consecutive hours without at least a 30-minute change in duty status."

The American Trucking Association, in a news release on Aug. 14, "hailed" the proposed changes to the hours of service rules as a way to improve safety while providing additional flexibility for professional drivers.

"(Transportation) Secretary (Elaine) Chao and (FMCSA) Administrator (Ray) Martinez are to be commended for their commitment to an open and data-driven process to update the hours-of-service rules," ATA President and CEO Chris Spear stated in the news release. "We look forward to studying and understanding how these proposed changes will impact our industry so we can provide relevant data and information to strengthen and support a good final rule that bolsters safety and provides drivers needed flexibility."

Owner-Operator Independent Drivers Association (OOIDA) President Todd Spencer said in a news release, "Truck drivers are more regulated and more compliant than ever, but crashes keep going up. FMCSA's proposal is the best chance of reversing that trend and now is a critical time for drivers to submit comments on how flexibility would improve their ability to operate safely."

OOIDA emphasized in comments on the rule that in order for new changes to have the most safety benefits, drivers should have sole discretion about how and when to use the proposed provisions. Here is a link to the entire news release, including the group's positions on the provisions in the proposal and recommendations to make further improvements: https://www.ooida.com/…

The Truck Safety Coalition (TSC), a partnership between the Citizens for Reliable and Safe Highways (CRASH) Foundation and Parents Against Tired Truckers (PATT), opposed the FNCSA proposal, claiming it would "drastically weaken" the HOS rules. The TSC said in a news release on Aug. 14 that the FMCSA claim that the proposed changes provide "greater flexibility for drivers subject to the HOS rules without adversely affecting safety" is a departure from reality as well as the agency's main mission of improving truck safety. "The FMCSA's proposed changes to the HOS rules for truck drivers will not improve safety," said the TSC.

"Instead of moving forward on these rollbacks, the agency must produce compelling data to demonstrate that these changes will not lead to more health problems for truck drivers, more coercion of truck drivers, and more crashes involving trucks drivers operating while fatigued," said the TSC.

"The agency is offering flexibility without regard for the fact that it could be exploited by the worst actors in the industry, including drivers who will operate while fatigued and motor carriers who will coerce them to do so. The FMCSA should immediately rescind these proposed changes and focus their time, resources, and efforts on advancing proven safety solutions such as speed limiters and automatic emergency braking," added the TSC. Here is a link to their original comments on the 2018 ANPRM: https://www.regulations.gov/…

Currently, during harvest and planting season as determined by each state, drivers who transport agricultural commodities, including livestock, are exempt from the HOS requirements from the source of the commodities to a location within a 150-air-mile radius from the source, the FSMCA noted on its website.

During the first few days of November, the governors of both Minnesota and North Dakota issued executive orders granting a waiver of HOS requirements for drivers of commercial vehicles transporting propane, gasoline and diesel fuel to retail suppliers.

Minnesota Gov. Tim Walz said the exemption was being granted "due to a wet spring, followed by a cold and wet fall, the corn and soybean harvest has been significantly delayed. Farmers in Minnesota and neighboring states have been impacted by the rain and the early onset of cold weather which will result in harvest activities happening simultaneously throughout the region."

Livestock carriers received an extension from current HOS rules until September 2018, which was then renewed for one year. On Oct. 30, the Responsible and Efficient Agriculture Destination (TREAD) Act was introduced in the House by U.S. Reps. Angie Craig, D-Minn., and Lloyd Smucker, R-Pa., to provide flexibility and relief from HOS rules for agricultural haulers, allowing agriculture haulers within a short driving distance to finish their route while transporting animals, live insects and perishable goods.

"Agriculture haulers often travel on rural, unpaved roads with low-speed limits and run out of Hours of Service while only being a short distance from where they need to go," according to a news release on Craig's website. "This bipartisan bill would make it possible for drivers hauling live animals and perishable goods to finish their routes if they are within 150 air miles of their destination. The bill additionally allows this exemption to be utilized year-round rather than only during harvesting seasons."

Here is a link to the news release noting all the organizations that support of TREAD: https://craig.house.gov/…

NCBA President Jennifer Houston said in an Oct. 30 news release, "Agricultural haulers -- and especially livestock haulers -- face very unique challenges that haulers in other industries don't face, and this bill recognizes that need. On behalf of America's cattle producers, I want to thank Representatives Craig, Smucker, and all the other original co-sponsors for their leadership on this issue and working towards needed flexibility within Hours of Service for our livestock haulers."

There has been no firm decision yet by the FMCSA on the proposals for its HOS rules for ag haulers or the trucking industry as a whole. And Ray Martinez, who was administrator of FMCSA for a little over 18 months, left the agency on Oct. 28. Jim Mullen, currently FMCSA chief counsel, will serve as interim administrator of the agency until President Donald Trump nominates a replacement who must then be confirmed by the Senate.

Because of the change in guard at the agency and the thousands of comments recently received on the latest notice of proposed rulemaking, many in the industry feel we may not see a final decision on the hours of service rule until sometime in 2020. The agency will once again need to weigh the pros and cons of the proposal, which will not be an easy task. 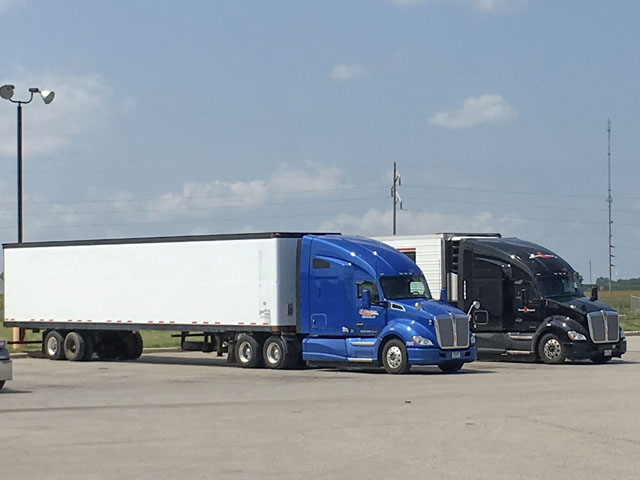