On June 4, the House Appropriations Committee said in a news release that they approved the fiscal year 2020 Transportation, Housing and Urban Development (THUD), and related agencies bill on a vote of 29 to 21. The legislation funds the Department of Transportation, the Department of Housing and Urban Development, and other related agencies, including the United States Interagency Council on Homelessness.

The bill, which prevents the Department of Transportation (DOT) from eliminating the 30-minute break requirement from current hours of service regulations, includes a provision that "prohibits future attacks on state meal and rest break laws" as it relates to the U.S. Department of Transportation's (DOT) Federal Motor Carrier Safety Administration (FMCSA) contentious Hours of Service (HOS) rule.

Heavy Duty Trucking (HDT), media services for trucking and its allied industries, noted on its website on the same day the bill passed that, "The committee apparently didn't like the FMCSA's move late last year to announce that federal hours of service rules pre-empt state meal and rest break rules (most notably California's)." Right before Christmas 2018, the agency had granted petitions to preempt California's meal and rest break rules for truck drivers because they conflicted with current federal hours-of-service regulations. Even as the FMCSA was close to proposing new revisions to the hours of service rules, the THUD bill aims to stop the agency from dropping the 30-minute rest break provision, according to HDT.

"However, those provisions still face an uphill climb in becoming law," noted Overdrive, a magazine for leased owner-operators and independent owner-operators. "The policy riders must still clear the Senate, which has yet to unveil any appropriations bills, and be signed by President Trump. Likely, the Senate spending bills will differ from the House's versions, setting up a conference committee to work out the differences. In that scenario, the trucking riders would need to survive that process and then be passed again by both chambers, then signed by President Trump."

EXEMPTION FOR HOS REMAINS FOR LIVESTOCK AND INSECT HAULERS FOR NOW

In December 2018, the FMCSA announced a statutory exemption from electronic logging devices (ELDs) for transporters of livestock and insects to remain in place until further notice. The exemption was originally due to expire at the end of the government's fiscal year, September 30, 2018. Congress finally extended it again through December 21, 2018, and it was set to expire on June 26, 2019. The term "livestock" includes cattle, elk, reindeer, bison, horses, deer, sheep, goats, swine, poultry, fish used for food and other animals that are part of a foundation herd.

The use of an ELD intertwines with the HOS rule, because it requires all commercial drivers who prepare HOS records to connect an ELD to a vehicle's engine to record driving hours. Once the time expires, the ELD doesn't shut the truck down, but it alerts the driver that they are violating the rule if they continue to drive.

This can be problematic for drivers who are carrying live animals (and even perishable commodities) and may be close to their final destination or have been delayed in traffic along their route. Because of the electronic monitoring, they are forced to park the truck or risk fines (or other penalties) if they continue to drive because the ELD records them going past their allotted hours.

On May 1, U.S. Senator for Nebraska, Ben Sasse reintroduced the Transporting Livestock Across America Safely Act, with Sasse leading a bipartisan group of senators in introducing the legislation.

In a press release, Sass said that, "Agriculture drives Nebraska, and nobody works harder to ensure the safety and well-being of livestock than the Nebraskans who hustle day in and day out. Overly strict regulations are hurting our ranchers and our haulers. My legislation pushes back against those dumb regulations and works to promote safe transportation. This is good, reasonable, common sense, bipartisan legislation and it should pass so we can give Nebraskans the flexibility they need to keep livestock safe and to keep our state running and feeding the world."

The Transporting Livestock Across America Safely (TLAAS) Act addresses these problems and eases the burden of these far-reaching HOS and ELD regulations for haulers of livestock or insects.

The inflexibility of these regulations will be costly for haulers (who have a proven safety record) and place the well-being and welfare of cattle, hogs and other livestock at risk, noted the press release. Current law does not allow flexibility for livestock and insects to reach their destination given the vast geography of production and processing facilities, most often spanning from coastal states to the Midwest.

Extended stops for a hauler, which would be necessitated by the HOS regulations, are especially dangerous for livestock during summer or winter months; high humidity and winter temperatures with below freezing wind chills cause significant stress on livestock.

Specifically, the Sasse legislation provides that HOS and ELD requirements are inapplicable until after a driver travels more than 300-air miles from their source. Drive time for HOS purposes does not start until after 300-air mile threshold.

In addition, it exempts loading and unloading times from the HOS calculation of driving time, extends the HOS on-duty time maximum hour requirement from 11 hours to a minimum of 15 hours and a maximum of 18 hours and grants flexibility for drivers to rest at any point during their trip without counting against HOS time.

The legislation also allows drivers to complete their trip, regardless of HOS requirements, if they come within 150-air miles of their delivery point. It also ensures that, after the driver completes their delivery and the truck is unloaded, the driver will take a break for a period that is five hours less than the maximum on-duty time (10 hours if a 15-hour drive time).

The House bill that passed June 4 also included a continuation of the ELD waiver granted to livestock and insect haulers. Under the bill, such drivers can continue to run on paper logs through September 2020.

Considerations for changes to the current HOS rule surround the safety of the drivers who share the roads with semis and whether extending hours for truckers can be a safety hazard. In the end, it could be a difficult balance to achieve.

Here is a link to the entire study: https://www.fmcsa.dot.gov/…

It is understandable that trucks hauling live cargos need some kind of reform to the HOS, like the ones mentioned in the Sasse TLAAS Act. However, the bottom line in all of this is that there needs to be a solution that protects the safety of not just live cargo being transported, but primarily, the safety of all drivers; regardless of what vehicle they are driving on the roads. 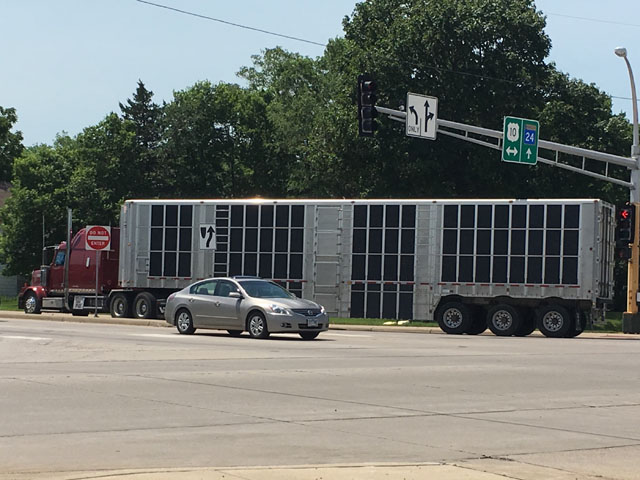