It has been a rough year for commerce on the Mississippi River system, and it continues to worsen as nonstop rains keep adding to already swollen rivers. Many areas are already cresting for a third time, meaning they have dropped below flood stage, only to rise again. Barge logistics on the Mississippi River have been slowed or entirely stopped due to weather-related flooding since January of this year, and it is still happening as we start June.

The Mississippi River in St. Paul, Minnesota has been in flood stage since March, with flood stage there at 14 feet and moderate flood stage at 15 feet. As the river moved south through the St. Paul District, after having been in flood stage since March, sand and sediment was washed through the channels creating shoaling, a sandy elevation of the bottom of the river, constituting a hazard to navigation. In response, the U.S. Army Corps of Engineers St. Paul has been busy dredging the channels to maintain the navigation channel and enable safe travels for tows pushing barges to the Port of St. Paul once water levels decrease and locks reopen further downstream.

The St. Paul District is responsible for maintaining 243.6 miles of navigation channel to a depth of at least 9 feet on the Mississippi River from Minneapolis at river mile 857.6 to Guttenberg, Iowa, at river mile 614.0, and 40.6 miles on three tributaries: the Minnesota, St. Croix and Black rivers. The district is also responsible for supporting inland navigation by operating 13 locks and dams and by maintaining the 9-foot navigation channel.

George Stringham, Public Affairs USACE St. Paul, told me dredging is currently taking place at five locations in the district. We talked about the continued flooding along the entire Mississippi River system and tributaries, and how it has stalled barges from coming up to St. Paul since the first tow of the season arrived with 12 barges on April 24.

Stringham also mentioned that while the severe flooding in the summer of 2014 caused them to dredge through most of the summer, the continued flooding in 2019 will likely keep them dredging in the St. Paul District through the rest of the navigation season.

The Mississippi River in downtown St. Paul has now crested for a third time this year. It crested at 20.19 feet on March 31, the seventh highest crest on record. It hit a secondary crest of 17.64 feet on April 24, and on June 1, it crested at 15.84 feet. By May 8 of this year, the river had spent 42 consecutive days above flood stage, surpassing the previous record of 33 days, set in 2001.

Here is a link to the current stage of the Mississippi River in St. Paul: https://water.weather.gov/…

On the afternoon of May 23, the U.S. Coast Guard once again shut down the Mississippi River at St. Louis when it rose above 38 feet, stopping barge traffic from moving into or out of the harbor for the second time this year.

In 2019, the Mississippi River at St. Louis has been above flood stage for 78 consecutive days as of June 2, with no end in sight. The record for flood duration was in 1993: For five total months, area rivers were at or above flood stage, including one stretch of 98 days in a row, according to National Weather Service data.

On June 2, the Mississippi River at St. Louis was at 43.71 feet, on its way to the second crest of 46 feet. NWS in St. Louis said at 46 feet, this would be the second highest crest on record there.

Here is a link to the current stage of the Mississippi River in St. Louis:

"The Lower Mississippi (below St. Louis) is open to traffic, but is at flood stage from Cairo to New Orleans with safety protocols in effect. Water level in New Orleans is at 16.4 feet and holding, with strict flood stage protocol in place until levels drop below 16 feet," Tom Russell, of the Russell Marine Group, told me.

Expectations are that the river will not drop below 16 feet until sometime later in the second half of June. "The river stage in Nola is now in the longest sustained flood stage level on record," added Russell.

Here is a link to the current stage of the Mississippi River in New Orleans:

On May 10, the USACE New Orleans District reopened the Bonnet Carre Spillway for a second time, which was unprecedented during the same flood event. This is the first time this spillway has been opened in two consecutive years (2018/2019), and the first time it has been opened twice in the same year. As of May 31, there were 168 bays open.

According to the USACE, a decision to operate the Bonnet Carre Spillway is made when existing conditions, combined with predicted river stages and discharges, indicate that the mainline levees in New Orleans and other downstream communities will be subjected to unacceptable stress from high water. Included in the complex decision process are environmental considerations, as well as hydrologic, structural, navigational and legal factors. The spillway is located in St. Charles Parish, Louisiana, about 12 miles west of New Orleans.

The second spillway operated by the USACE New Orleans District is the Morganza Floodway (Spillway) located in the Lower Mississippi River at river mile 280, near Morganza in Pointe Coupee Parish above Baton Rouge.

The U.S. Army Corps of Engineers had intended to open the spillway on June 2, but on May 30, changed the opening date to June 6. Army Corps spokesman Ricky Boyett said in a radio interview with WWL New Orleans that the decision was made due to a change in forecasts that show the Mississippi River won't reach an elevation that threatens overtopping the Morganza structure until at least June 9, compared to the prior model showing a June 5 threat.

Unlike the Bonnet Carre Spillway, which is not a threat to homes and cropland, "the Morganza Spillway only opens in extreme situations due to the fact houses and crop land are flooded," said Russell. This would only be the third time the spillway has been opened since its completion in 1954.

Should the USACE decide to open the spillway, a barge will be moved into place in Morgan City where the barge will be sunk to assist with flooding in Bayou Chene, according to local news reports.

KALB-TV News in Alexandria, Louisiana, reported officials said that without a barge or a floodgate in place, Assumption, St. Mary, lower St. Martin, Iberville, and Terrebonne parishes would likely flood.

"Sinking the barge days before the spillway (opens) will help water levels go down in the Morgan City and backwater-flooded areas. The gradual opening of the gates will allow water in the Atchafalaya Basin (to) rise slow enough to nudge wildlife to higher ground without a sudden inundation," noted KALB.

In March 2019, Louisiana Governor John Bel Edwards announced the state would begin construction on a permanent Bayou Chene floodgate to prevent having to sink additional barges, which serve as temporary floodgates.

Here is a link to more information on the Morganza Spillway:

MORE RAIN AND START TO HURRICANE SEASON WILL EXASPERATE FLOODING

It appears that the flooding in the U.S. will not be gone anytime soon. DTN Senior Ag Meteorologist Joel Burgio noted in his weather comments that a secondary weak southern branch trough is forming for the Central Plains, the South and east Midwest, and the Delta later in the six- to 10-day period.

"These troughs are likely to spread showers and thundershowers through the southern and eastern Midwest, and the Delta regions during the outlook period, maintaining the wet pattern for the Midwest and redeveloping the wet pattern over the Delta," said Burgio. "The first of these troughs is already east of the Central/Southern Plains region early in the outlook period. However, the second trough will bring showers and thunderstorms back to this area later in the period. The southeast U.S. ridge continues to show signs of weakening during the outlook period. This likely means less hot weather and greater chances for scattered thundershowers in the region during the six- to 10-day outlook period."

As for hurricane season, Russell noted that it begins in early June and runs until October. "The most active period is late-July, August and early September, with the current forecast calling for 14 tropical storms, six Hurricanes and two to three intense hurricanes," said Russell. "There is danger for New Orleans should a hurricane impact while water levels on the Mississippi River are high. A surge of water from the Gulf could run up the river and possibly top the levees, causing city flooding."

The flooding on the Mississippi River system has now entered record territory in more places than I mentioned above. The longest record now belongs to Baton Rouge, which on May 20 officially broke the 1927 record of being in flood stage for 135 days. On June 2, the river there was at 43.1 feet (flood stage is 35 feet), and it is expected to rise to a crest of 44.5 feet on June 10. That means that, as of June 2, the Mississippi River at Baton Rouge has been in flood stage for 148 days.

Here is a link to the current stage of the Mississippi River in Baton Rouge:

The financial toll on everyone who is affected by this flooding on the entire Mississippi system cannot even be assessed yet, because there has been no end to it, and there is much uncertainty as to when it will end. 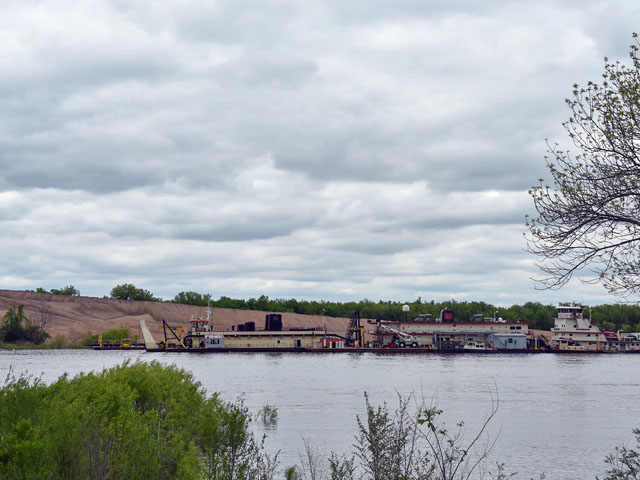