As the Mississippi River in St. Paul, Minnesota, began to move closer to minor flood stage around April 15, a snowstorm on April 11 -- followed by heavy rains on April 17 -- caused the river to change course and head back above major flood stage. Finally, on April 24, it hit a second crest of 17.64 feet, not quite as high as the March 31 crest of 19.83 feet.

The U.S. Army Corps of Engineers (Corps) St. Paul District said they were currently operating the river in an "open river" state. This means that the dam gates are removed from the water and the river is acting like it would without the lock and dam system in place. Corps officials do this when there is enough water to maintain the congressionally mandated 9-foot navigation channel. "The lock and dam system is not designed to reduce flood risk," noted the Corps. "It was developed exclusively to maintain the needed water depths for navigation."

As of April 29, the river was at 16.1 feet, but as the water continues to flush south from St. Paul, high water is causing all of the locks between Lock 11 (Mile Marker 583) and Lock 22 (MM 301) to either close again or prepare to close by April 30. At Lock 20 (MM 343), current expectations are that this lock will be closed the longest, possibly until May 8, according to the American Commercial Barge Line. If that holds true, no vessels will be able to come up from St. Louis any farther than Lock 20.

In St. Louis, the river is above minor flood stage at 30.66 feet on April 29 and is expected to fall below minor flood stage at 29.7 feet on May 2 and then rise again to 31.4 feet by May 5. Safety protocol, such as tow size reductions and daylight movement only, in the St. Louis Harbor are in effect. "The Lower Mississippi River had been on a very slow fall but given the wet May forecast, it is again expected to start making a slow rise during the upcoming weeks," said Tom Russell, Russell Marine Group. "Snowmelt and rain from Upper Miss will keep pushing water down the Lower Miss. The good news is the Ohio River that feeds the majority of water to Lower Miss is not expected to have abnormally high amounts of rain."

Currently though, the Ohio River at Cairo, Illinois, is above moderate flood stage at 48.4 feet but is on a steady descent. Until conditions improve, tow sizes between Cairo and the Gulf have been reduced from 40 barges to 25 or less per tow. The Mississippi River at Vicksburg, Mississippi, however, is still rising and is currently in moderate flood stage at 47.25 feet, with a crest expected at 48 feet on May 7. Tows are restricted to daylight only hours under the Vicksburg bridge.

In New Orleans the sustained nasty weather over past few months improved during the last couple of weeks, noted Russell. "That has allowed elevators/terminals to finally make a dent in line ups. Anchorage space in the Port is starting to open up and the queue of ships waiting entry into the Port has been eliminated.

"However, the water levels have not fallen and conditions remain dangerous at a stage in NOLA, hovering around 16 feet. During the upcoming weeks, the water levels in the Harbor will see a slow rise and may again reach flood stage of 17 feet. The river has not been at this sustained level since 1983.

Flood stage protocols are in effect until the NOLA gauge drops below 16 feet and high water protocols are in effect until water drops below 12 feet. Additionally, all vessel traffic is restricted to daylight only from mile 90 NOLA to mile 233 Baton Rouge. Substantial extra port costs for ocean vessels moving through these mile points will be incurred. The river current is strong and fast increasing the possibilities of accidents," concluded Russell.

In their weekly Grain Transportation Report, the USDA noted that for the week ended April 13, barge grain movements totaled 428,581 tons, 15% lower than the previous week and 31% lower than the same period last year.

A LIGHT AT THE END OF THE TUNNEL

As the Mississippi River remained at flood stage, the wait continued in St. Paul for the first tow of the season to open the 2019 shipping season.

On April 21, after some of the locks in the middle Upper Mississippi River temporarily opened, the first commercial vessel of the season -- the Motor Vessel Aaron F. Barrett -- passed Lock and Dam 10, in Guttenberg, Iowa. "She's headed to St. Paul with nine loads and three empty barges, and could reach the Port of St. Paul in the coming days, pending river conditions," said the Corps on Facebook on April 22. "Flows look to close Lock and Dam 4 to all navigation for a short period, and a lockage could only happen in daylight hours for safety considerations."

Then, the wait was over. After Lock and Dam 4 reopened, the Motor Vessel Aaron F. Barrett was locked through Lock and Dam 2, near Hastings in the early morning hours of April 24.

The Corps considers the first tow to arrive at Lock and Dam 2 as the unofficial start of the navigation season, because it means all of its locks are accessible to commercial and recreational vessels. "However, this spring’s high flows continue to force lock closures in Iowa, Illinois and Missouri and could lead to additional lock closures within the St. Paul District, leading to delays in other tows reaching St Paul," said the Corps.

According to the Corps, the earliest date for an up-bound tow to reach Lock and Dam 2 was March 4, in 1983, 1984 and 2000. The average start date of the navigation season is March 22. Historic flooding in 2001 delayed the arrival of the first tow until May 11. The first tow to reach Lock and Dam 2 in 2018 was the Motor Vessel Michael Poindexter, on April 11, the latest arrival date unrelated to flooding.

For those of us "river rats" who were born and raised in St. Paul, this was a banner day for us to see the opening of the 2019 shipping season. As the Corps noted above, it may be a few weeks until we see any more tows and barges enter St. Paul, but at least the very first one of the year fought its way here and christened the official start to spring on the Upper Mississippi River.

Here is a link to the NWS north central river forecast: https://www.weather.gov/…

Here is a link to the NWS Lower Mississippi River forecast: https://www.weather.gov/… 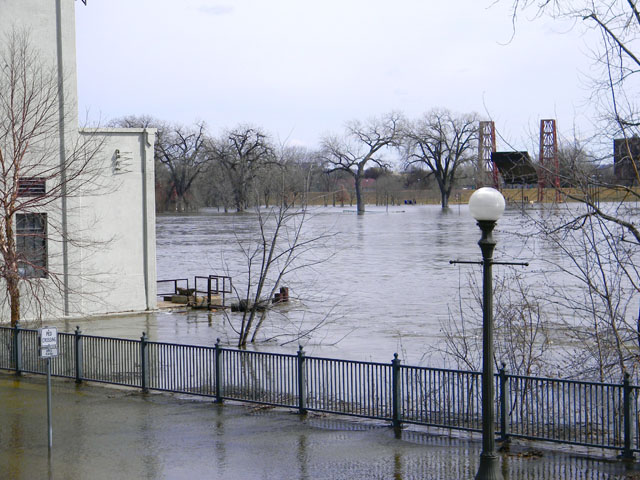