It's a sure sign of spring when one hears the words "opening day." In most cases, those words are associated with the start of a new Major League Baseball season. For the Great Lakes, it means the start to a new shipping season. In order for the season to open, U.S. Coast Guard icebreakers (USCGC) and Canadian Coast Guard icebreakers (CCGS) are called to duty to help break up the stubborn ice remaining on the Great Lakes.

As of March 23, average total ice coverage on the Great Lakes was at 23%, according to National Oceanic and Atmospheric Administration (NOAA). The most ice, 41.5%, was still seen on Lake Superior. This past winter, Lake Superior got very close to becoming 100% ice covered. In early March, Superior was 94% covered in ice for just the fifth time in the past five years, according to the Michigan Department of Transportation.

On March 19, the USCGC Alder and the Mackinaw moved through the Soo Locks, heading to the Twin Ports of Duluth/Superior, breaking ice and preparing for the opening of the 2019 shipping season, which is set to begin at the Soo Locks on March 25. The CCGS icebreaker Samuel Risley arrived with the Alder and Mackinaw, ready to break ice on its way to Thunder Bay, Ontario. The official opening of the Soo Locks is Monday, March 25.

The Soo Locks are a set of parallel locks, operated and maintained by the U.S. Army Corps of Engineers, Detroit District. The Soo Locks enable ships, also known as "lakers," to travel between Lake Superior and the lower Great Lakes. The Poe Lock, the larger of the two, which opened in 1969, is 1,200 feet long. The MacArthur Lock was opened in 1943 and is 800 feet long. More than 4,500 vessels carrying up to 80 million tons of cargo maneuver through the Soo locks annually. Iron ore, coal, wheat and limestone are among the most frequently carried commodities, according to the USACE.

The USCGC Mackinaw spent Thursday, March 21, breaking out the Port of Duluth-Superior by cutting a 100-foot-wide lane through the ice into the Superior Bay, said the Duluth Seaway Port Authority. On March 22, the Kaye E. Barker was the first laker to leave Duluth under the Duluth Aerial Lift Bridge, leaving at 12:12 p.m., officially opening the 2019-20 lake shipping season there. The Barker, escorted by the USCGC Mackinaw, was bound for Two Harbors to load iron ore. Built in 1952, the Barker was also the last ship to enter the Port of Duluth-Superior to close the 2018 shipping season, arriving Jan. 15.

The final season opener will be on March 24 when the Montreal/Lake Ontario Section opens. This will mark the official opening of the St. Lawrence Seaway's 2019 navigation season, according to Lake Superior News. The system of locks and dams on the St. Lawrence River in Canada allows large international cargo ships, known as salties, to pass from the Atlantic Ocean to the Great Lakes. The seaway is anchored by domestic trade at the Port of Duluth-Superior, which operates as a global gateway for bulk cargo entering the system.

Approximately 900 vessels and 35 million short tons of cargo move through the Port of Duluth-Superior each year, making it the Great Lakes' largest tonnage port and one of the nation's top 20. Through November 2018, grain volume was up 22% compared to 2017 and iron ore was more than 25% above the five-year average.

The St. Lawrence Seaway Management Corporation said much of the credit for the increase in 2018 tonnage was given to healthy movements of grain from the Port of Duluth-Superior. It was the best on record since the turn of the century. (https://www.dtnpf.com/…)

Here is a link to the Duluth Harbor Cam website where you can see the lakers that have moved through the port since March 22, along with a live cam that shows the ice remaining on the lake: http://www.duluthharborcam.com/… 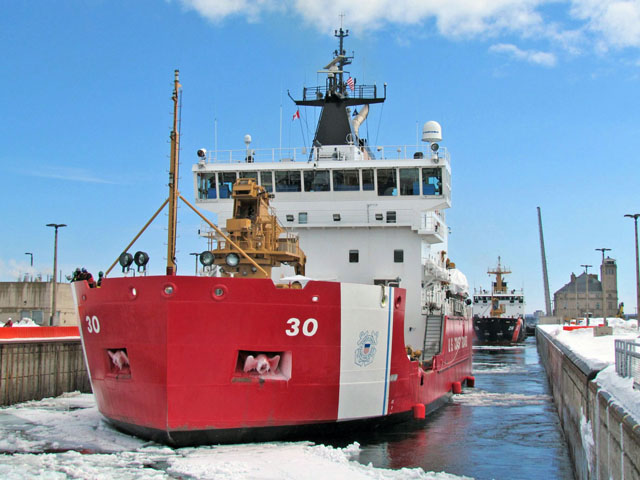