The opening of the Bonnet Carre Spillway on Feb. 27 was the first time in history that it had been opened in consecutive years. It is also the third time in four years that it has been opened, and the 13th time it has been operated since construction was completed in 1931. Operation of the structure will relieve pressure on mainline levees, maintain river stages, and regulate the flow downriver from the spillway, according to the U.S. Army Corps of Engineers (USACE).

USACE said that the opening of the spillway, located in St. Charles Parish, Louisiana, became necessary due to this winter being one of the wettest winters in the Mississippi flood valley in 100 years. The spillway can divert a portion of the river's floodwaters via Lake Pontchartrain into the Gulf of Mexico, thus allowing high water to bypass New Orleans and other nearby river communities, according to the USACE. The structure has a design capacity of 250,000 cubic feet per second (CFS), the equivalent of roughly 1,870,000 gallons per second.

"Environmental, hydrologic, structural and navigational considerations all bear on the decision to open Bonnet Carre," noted USACE. "Other factors that affect the decision are the overall condition of the levees and the ability of the river to pass flows, and the effects high water and river currents may have on vessels navigating the river. The Corps has a detailed environmental monitoring plan in place that will assess water quality, dissolved oxygen, sedimentation, recreation and natural resources such as the pallid sturgeon, both within the spillway as well as Lake Pontchartrain."

Crews will adjust how many bays are opened every day based on water levels. As of Friday, March 8, 188 of the spillway’s 350 bays are open. It is expected the spillway will remain open for at least a month.

While water levels are expected to drop slowly below flood stage in the Baton Rouge and New Orleans harbors, high water levels are still expected for an extended period, according to Tom Russell of Russell Marine Group.

"Flood stage safety protocols remain in place, slowing traffic and movements throughout the Port," said Russell. "The Port remains very congested. Ships waiting entry at Southwest Pass (SWP) has been a common situation since January. Currently there are 60+ ships waiting entry at SWP. High water coupled with unrelenting fog and rain have substantially slowed operations since the second half of December. Unusually warm weather will bring another round of fog and rain this week."

It is looking like there may not be much of a break in the flooding in the Lower Mississippi River (LMR), given the expectations for the likelihood of spring flooding in the Upper Mississippi River (UMR), starting in the St. Paul Minnesota District. According to a flood outlook released March 7 by the National Weather service in Chanhassen, Minnesota, the amount of snow water equivalent in the snowpack in Minnesota is in the upper 10% of historical records over a widespread area.

The mess at the Gulf and LMR continues to cause slowdowns of barges trying to make their way to the swollen Gulf. All of this has added to inflated basis values, and at times, higher barge freight. Besides moving grain down river, moving fertilizer upriver could also become an issue as spring planting nears.

Currently standing in the way of barges heading north is a seven-mile long ice gorge located just above mile 343 near Lock and Dam 20 in Canton, Missouri. On top of that, the UMR is nowhere near ready to open for shipping, as Lake Pepin (near Lock and Dam 4) remains frozen over, stopping barges from breaking through the ice to get to St. Paul, Minnesota. As of March 6, the ice was 23 inches deep and had actually thickened since the prior measurement. The next measurement by USACE will take place on March 13. The opening was also late last year (average opening is March 22) as the first barges finally got through Lake Pepin and reached St. Paul, Minnesota, on April 11, 2018.

Here is a link to the National Weather Service's 2019 Winter/Spring Flood Outlook #5, which was published on March 7: 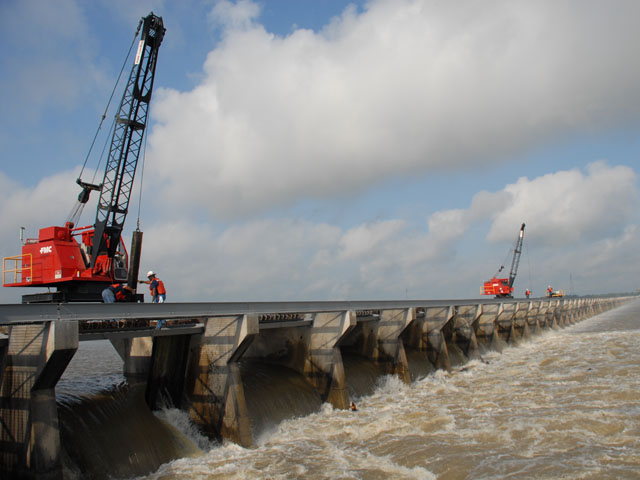