Snowfall records fell all over the western U.S in February, from Seattle to Spokane, Washington, to Missoula, Montana, reported the Minneapolis Star Tribune on March 1. Storm after storm during February produced record snowfall across the Upper Midwest.

In the Twin Cities of Minneapolis-St. Paul, it was the snowiest month since 1991 and now is the fourth snowiest month on record. The February record was shattered with 39.0 inches, according to the National Weather Service. St. Cloud, Minnesota, broke its February record with 27.6 inches, making February 2019 now its snowiest. In North Dakota, snowfall records for February were also set. According to the NWS Grand Forks, Grand Forks airport measured 23.2 inches, the Grand Forks NWS office saw 27.0 inches and Fargo recorded 21.4 inches -- all new snowfall records for February. Billings, Montana, saw its third snowiest February on record at 26.7 inches.

I assume after reading all of those snow totals, you get the drift (no pun intended). All of that snow has been piling up, and to make matters worse, the high winds in those states caused snowdrifts, making travel miserable, especially for trains moving along the Northern Plains from Minnesota all the way to the Pacific Northwest. On top of all of the snow, extreme cold is setting in again in those states, which also is a challenge for rail carriers.

On March 1, a Canadian Pacific (CP) train derailed near the south end of Carlos, Minnesota, north of Alexandria. More than two dozen train cars near the middle of the train derailed. There were no injuries and no public safety issues, reported the CP. The cars were carrying grain and potash, and no hazardous materials were involved. The cause of the incident is under investigation.

On March 2, a train derailed in rural Foster County in Bordulac, North Dakota, roughly 10 minutes south of Carrington. One of the cars possibly contained ammonia and a hazardous materials team was called in to investigate, according to the Grand Forks Herald.

A shuttle loader in northeastern North Dakota said the railroad has had issues with lack of power due to the serious cold and extreme snow all the way along the northern tier to the Pacific Northwest (PNW). "Now the problems continue in March and we are hoping it doesn't spill in to April," he noted.

The CP noted that in Minnesota, 357 cars were one to 10 days past due and in North Dakota, 206 cars were one to 10 days past due, and 220 cars 11 or more past days due. On March 2, the CP notified customers that an outage occurred on Friday afternoon on Detroit Lakes Subdivision and another one Saturday morning on the Carrington Subdivision. On March 4, the CP announced to customers that CP's north/south routes "have now both been restored. The track outage on Detroit Lakes Subdivision cleared late Saturday evening, and Carrington Subdivision outage cleared at 0600 this morning. CP is enacting our recovery plan. Customers may expect near term delays of up to 48 hours."

SECONDARY FREIGHT AND BASIS STRENGTHEN DUE TO SLOWDOWNS

Todd Yeaton, shuttle facility manager, Kimball, South Dakota, told me that, "Two months ago, there was no West Coast bid (as we had discussed) because of the weather and vessel logistics jamming trains on that end. One facility was known to have one week of shuttle backlog, paying demurrage on over a dozen trains. That's what precipitated the beginning of this meltdown and freight issue."

Yeaton said that since early winter, they have seen service steadily decline, which has been reflected in the high priced secondary freight market, but in basis as well. As of the week ending Feb. 23, the BNSF reported that shuttle trips per month were at 2.1, versus their last report for the week ending Feb. 9 at 2.7.

Dwell time after release, with shuttles sometimes sitting in between the origin and destination, adds to issues faced by end users. "With them not moving at all, of course rolls downhill, and origins are falling behind on contract applications," said Yeaton. "That causes us to step in and buy a return trip to hit the delivery period, which costs two to three to four times the margin we are running."

A shuttle loader in northeastern North Dakota told me that some grain companies are charging shippers for being late on contract. "We have heard nickels and dimes discounts (per bushel) per day being applied to late shuttle placements and billing," he noted.

Yeaton said it is frustrating because when empties are pushed in to his facility, there is less "flex" than in the past for spot times. "With secondary freight costs running so high, the traffic departments of the respective companies are on origins to turn as quickly as possible. Dwell time is lost money because the traffic brokers want the chance to sell into this market to realize the unexpected freight gains." According to the weekly update by the BNSF to the STB, the dwell time for the week ending Feb. 22 system wide was at 31.5 hours, with one of the longest being in their Northtown, Minnesota yard at 41.0 hours. The CP noted that system wide, dwell time was at 17.7 hours, with the longest being in Harvey, North Dakota, at 38.9 hours.

"What will come in to play next is the temporary storage that needs to be reclaimed and on top of that, spring is coming," added Yeaton.

Here is a link to the BNSF network update to customers dated March 1: https://domino.bnsf.com/… 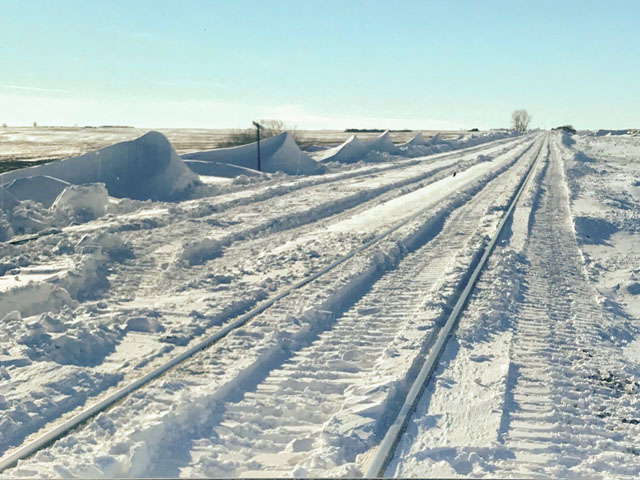