In a press release on Jan. 17, 2019, the Great Lakes Seaway Partnership noted that, "With total cargo shipments of 40.9 million metric tons during the 2018 navigation season, St. Lawrence Seaway traffic increased nearly 7% year-over-year. Additionally, total vessel transits were up nearly 6% over 2017."

The St. Lawrence Seaway Management Corporation (SLSMC) said much of the credit for the increase in tonnage can be given to healthy movements of grain, the best on record since the turn of the century. "Marketing efforts under the "Highway H2O" initiative served as a catalyst to spur increased movements of a broad range of cargoes including grain, road salt, stone, cement, gypsum (a soft sulfate mineral) and refined fuels."

Hwy H2O is a 3,700-kilometer marine highway that offers shippers direct access to the commercial, industrial and agricultural heartland of North America and includes the five Great Lakes and the St. Lawrence Seaway.

Click this link to read about Hwy H2O: http://hwyh2o.com/…

"Total tonnage on the St. Lawrence Seaway exceeded the five-, 10- and 15-year averages, making 2018 an exceptionally strong shipping season -- the best in over a decade," said Craig Middlebrook, deputy administrator of the U.S. Saint Lawrence Seaway Development Corporation. "In particular, we were pleased to see heightened activity on the seaway in December. Overall gains in year-over-year commodity increases were widespread, most notably in U.S. grain export trade. The investments in seaway infrastructure and technology are achieving greater efficiencies for our customers and enhancing the binational waterway’s global competitiveness."

*All performance metrics above based on cargo traffic for the St. Lawrence Seaway only, excluding interlake traffic on the Great Lakes. Percentage increases compared to the same time last year.

The Seaway is anchored by domestic trade at the Port of Duluth-Superior, which operates as a global gateway for bulk cargo entering the system, specifically iron ore. The Duluth Seaway Port Authority is also celebrating a successful 2018 shipping season on the Great Lakes that ended with the Soo Locks closure on Jan. 15. The Port of Duluth-Superior is the largest tonnage port on the Great Lakes.

The Duluth Seaway Port Authority’s executive director, Deb DeLuca, said in a statement that the season is ending on a strong note. "Through November, grain volume was up 22% compared to last year and iron ore was more than 25% above the five-year average. While coal shipments are down, iron ore is picking up." Another notable event for the Port during the 2018 shipping season was the first shipment of soybeans in a decade.

The grain shipping season came to an end on Dec. 15, 2018 when the Federal Rhine was the last saltie (ocean going vessel) to leave the port of Duluth-Superior for the season, enabling the ship to clear Seaway locks well ahead of Christmas. The 656-foot Federal Rhine loaded 21,300 metric tons of durum wheat at the CHS elevator in Superior and is bound for Italy where it will be milled and made into pasta, which likely will be packaged and shipped back to U.S. grocery stores, according to the Duluth Seaway Port Authority.

While the Federal Rhine was the last saltie to leave the Port of Duluth-Superior for the season, Great Lakes freighters (lakers) would continue to move bulk commodities for another month as long as weather and ice conditions allowed, since the Poe Lock at Sault Ste. Marie, Michigan, remained open until midnight Jan. 15, 2019.

More than 4,500 vessels carrying up to 80 million tons of cargo maneuver through the Soo locks annually. Iron ore, coal, wheat and limestone are among the most frequently carried commodities. Opened in 1969, the Poe Lock is 1,200 feet long. The MacArthur Lock was opened in 1943 and is 800 feet long. The U.S. Army Corps of Engineers (USACE) will perform critical maintenance on the lock structures during the winter closure. The MacArthur and Poe locks are dewatered, and crews will be busy with a variety of maintenance projects in preparation to reopen in March, noted the USACE. The locks are scheduled to reopen March 25, 2019, weather permitting. 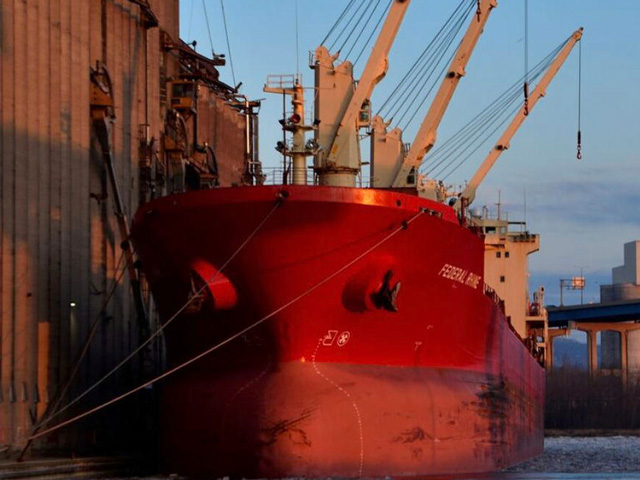