High water has been plaguing much of the U.S. river system since the end of December 2018. Many safety restrictions have been in place for weeks, but an accident on the Ohio River has created quite a mess.

On Dec. 25, 2018, the towing vessel Debbie Graham, which was pushing 15 loaded coal barges carrying approximately 1,500 to 1,800 tons of coal each, made contact with the 2nd Street Bridge on the Ohio River, Louisville, Kentucky, causing 15 barges to break free. According to Lt. Cmdr. Michael Metz, a U.S. Coast Guard (USCG) spokesperson, six of the barges were recovered and nine of them ended up at the McAlpine Dam just above the Falls of Ohio. By Jan. 2, seven of those nine barges had sunk.

The U.S. Army Corps of Engineers (USACE) Louisville District, USCG Sector Ohio Valley, and the navigation industry have continued their joint response since the accident occurred and are working to get the remaining barges salvaged safely as quickly as possible. Concern has been raised that the sunken barges may have spilled coal into the river, creating an environmental hazard.

The Kentucky Environmental Protection Agency also provided a statement saying, "The Cabinet is closely monitoring the situation and sees no evidence of an environmental/drinking water issue from the incident. It is believed that much/most of the coal is still in the barges. When they are raised, the Cabinet will assess whether there is any environmental concern from the remaining coal in the river and what action may be taken, if necessary, to address a release." Louisville's intake facility is located upstream from the where the barges sank.

Katie Newton, a spokesperson for the USACE Louisville District, told DTN on Jan. 6 that: "The salvage team moved their equipment Jan. 5 and is now staged at the upper dam site. The salvage plan is being finalized, and we expect work to begin in the next few days."

According to the USCG, vessel traffic currently is only permitted in daylight hours between Twelve-Mile Island to McAlpine Lock and Dam, aided by an assist vessel.

HIGH WATER PLAGUES MUCH OF THE RIVER SYSTEM

The past few weeks have been rough on the Illinois, Ohio and Lower Mississippi Rivers due to high water causing delays. However, conditions have begun to improve on the Illinois River at Marseilles Lock. As of Jan. 4, water levels in St. Louis fell below 25 feet, lifting the daylight-only restrictions in the harbor.

High water is still causing a reduction of tow sizes between St. Louis and Cairo southbound by five barges, and daylight-only hours remain in place for the railroad bridge between Illmo, Missouri, and Thebes, Illinois, and also the Vicksburg, Mississippi, bridge. High water has also reduced tow sizes between Cairo and the Gulf by five to 10 barges, with daylight transit only through Memphis. Restrictions will remain in place until the water recedes.

Thomas Russell, Russell Marine Group, told DTN: "Well-above-average rains in the Ohio River Valley and South have charged the rivers in the system, especially the Ohio and Lower Mississippi Rivers. Tow sizes have been reduced from St. Louis to New Orleans with a few areas restricted to daylight-only movement. Some terminals on the LMR will be unable to load until water flushes through over the course of next couple of weeks."

Russell noted that, in the past few weeks, "extremely bad weather," including a combination of high water, rain and dense fog, has "substantially backed up loading operations and ships waiting to load in Baton Rouge and the New Orleans Harbor."

"The Port is currently extremely congested with ships loading or waiting to load, putting traffic in gridlock. As of Jan. 2, there were 45 ships waiting to sail and 65 ships off the Southwest Pass waiting for entry into the Port," added Russell.

Russell said that high water and safety protocols will be in place at the port until water levels subside, at least through late January. "Weather will have to be taken into consideration and will play a role in slowing logistics over the next couple of months." 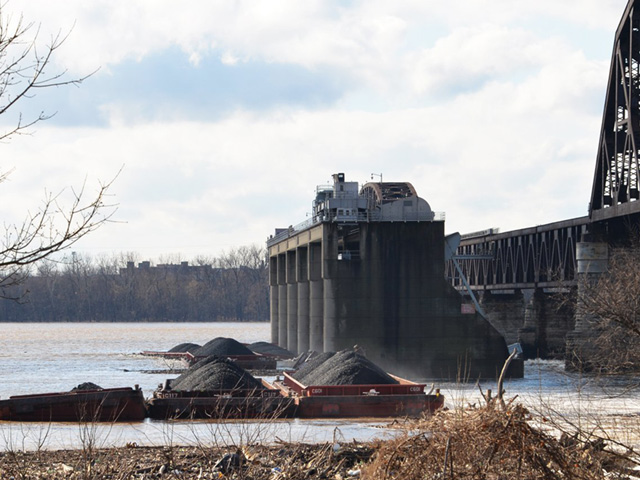