Throughout this past droughty summer, whenever I would drive through a county where the crops were struggling, I would think to myself, "Well, even if their yields aren't great, and even if the futures prices aren't great, at least their local basis should perk up." I was thinking that local elevators would see the poor yield prospects and get very competitive to bid for as much of the reduced local crop as they could attract.

How very naive of me.

During September, a U.S. elevator's new-crop corn basis bid is pretty well set for the early harvest timeframe. Therefore, this month I was able to look at DTN's vast database of country basis bids to see if localized responses to poor yield prospects actually occurred. Of course, it's virtually impossible to meaningfully compare basis values from one year to the next. Transportation routes and costs and markets change too much.

But, I theorized, in a year where yield prospects are so variable from one region to the next, from one county to the next, and from one elevator's draw area to the next, then whatever the basis values are, they should be noticeably more variable throughout the dataset this year than in previous years when U.S. yield prospects were more uniform. I wasn't expecting basis overall to be stronger in 2017, but I was hoping to see a larger standard deviation among the entire data set of this year's new-crop basis bids.

If those were our only two data sets to compare, it would be tempting to point at the table and say, "Aha! This year with greater variability in yield also has a greater variability in new-crop basis bids!" But, for one thing, the difference between the two data sets' standard deviations is probably not large enough to be statistically significant. And for another thing, I have data from other previous years with even more stable nationwide yield scenarios, and their standard deviations were even larger than the sets from 2016 or 2017, so I didn't even bother calculating the statistical significance of any of it. If anything, the variability of early harvest basis bids appears to be trending lower from one year to the next.

After the droughty summer of 2012, of course, new-crop corn basis bids were extremely variable. That year's majority range of bids during the month of September stretched from 31 cents over the futures price to 89 cents under the futures price (a 120-cent range). Variability has typically diminished ever since. After the relatively normal 2015 growing season, new-crop corn basis bids in September continued to follow this pattern of decreasing variability, with a nationwide range anywhere from 8 over to 84 under (a 92-cent range). Our present scenario in 2017 is less variable than that, so it does not appear that we are seeing any noticeable, unusual response to yield variability in the basis bids.

There are more than 60,000 bids to look at in any month-long, nationwide data set, and that might just be too cloudy to show any specific response to a crop's variable yield expectations. But perhaps in just one Corn Belt state, not distracted by the highs or lows of coastal shipping points, the data might be clearer. Throughout this summer, Illinois has seen drought that was spread fairly consistently across the state (so in theory, all basis bids should respond fairly consistently or not at all). Nebraska has extensive irrigation infrastructure to mitigate its corn yield variability during the spotty drought. South Dakota's drought was indeed extreme in some places and nonexistent in others, but the core of corn-producing counties were mostly outside the drought zone.

Iowa, however, was a perfect case study. In late May, the entire state was free of drought. Northern and western portions of the state have remained drought free throughout the summer, and many counties in the northeastern corner got very good precipitation to start their corn crops. But large chunks of property elsewhere in the state eventually succumbed to moderate drought, and in August, even some extreme drought. If local grain buyers were going to respond to poor yield prospects with stronger new-crop basis bids, then we should expect to see some kind of significant variability among the basis bids in the state of Iowa.

Except we don't see that. The standard deviation among new-crop corn basis bids during September 2017, when compared to previous years, looks much like the nationwide scenario. It's slightly more variable than last September's range of bids, but nevertheless, tighter than other previous years and part of a general trend toward less variability year over year. The year with the largest standard deviation was actually 2013, when 95% of Iowa's new-crop basis bids ranged between 11 cents over and 67 cents under the futures price. When this year's new-crop corn bids are placed on a map of Iowa, they do not appear especially strong in the regions where the drought is strong.

All that just demonstrates how transportation costs are a much more important driver of basis than yield prospects. It appears to be true not only for the basis values themselves -- cheaper freight costs allow stronger basis bids -- but also for the variability between all the various elevators' basis bids.

I don't believe this data set alone explains *why* basis bids appear to be growing more uniform year after year. Perhaps it's because freight costs have conveniently been getting more stable in the past few years. Or perhaps it's because there's less competition as cooperatives merge and grain companies merge, meaning more and more elevators get gobbled up by fewer and fewer large organizations and there are fewer and fewer independent basis bids being set. But it is a little disappointing that the basic economic idea of competition for supply doesn't seem to have much traction in corn basis anymore. If a local area looks like it will have a short crop this harvest, its farmers shouldn't necessarily expect any better basis price for their scarce corn than the farmers with a bumper crop in the next county over. 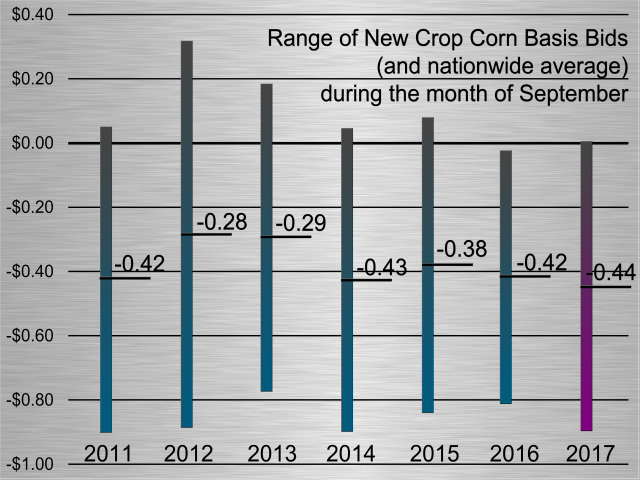 JHAUSCHILD79764491
9/27/2017 | 10:57 AM CDT
Makes me wonder if the basis variance you analyzed is being convolved by relatively low futures variance? Maybe re-run a cash variance analysis, test cash mean variance against futures mean variance as the initial "toggle" to keep digging into regional cash flat prices and then check the regional cash variances. We'd expect smaller futures variance due to the higher inventories we're working with...so maybe said inventories are polluting the analytical well a bit. Just a random thought.