Major rail service throughout eastern Texas remains at a standstill and the U.S. Coast Guard has suspended operations at ports, as well, as Tropical Storm Harvey continues to cause widespread flooding in the region.

Harvey, which initially made landfall in Texas late Aug. 25 as a Category 4 hurricane and was later downgraded to a tropical storm, has destroyed property in Corpus Christi, Rock Port, Port Aransas and other coastal towns in its path.

Port Arthur, Texas, was near the eye of the storm Wednesday morning. The city is essentially underwater as officials started evacuating the city in the midst of torrential downpours, an area rancher told DTN. Port Arthur also is home to the nation's largest oil refinery.

Since Harvey came ashore, the rain has caused catastrophic flooding in Houston, with a record-breaking 51.88 inches of rain already recorded in Cedar Bayou, Texas, according to the National Weather Service. And it's not done yet.

As Tropical Storm Harvey continues to cause widespread flooding in the Houston area, rail operations have been suspended along the Gulf Coast from Brownsville, Texas, to Lake Charles, Louisiana, due to high water and storm damage.

BNSF notified all customers on Tuesday that the flooding is causing major disruptions to BNSF service and operations in the region.

"Some locations have received nearly 40 inches of rain and several more inches are expected during the next 48 hours. With multiple washouts and high water reported on BNSF main lines in the area, all traffic destined to/originating from Houston has been suspended. Other area rail lines, including those with BNSF trackage rights, have also been forced out of service," noted the service advisory posted on the BNSF website.

BNSF also noted that, "All operations at BNSF Houston-area railyards and facilities, including our Pearland Intermodal and Automotive facilities, are currently suspended. Portions of major interstate highways in the Houston area remain closed and officials continue to urge residents to stay off local roadways. Our 24/7 Command Center remains in frequent communication with local, state and federal emergency personnel to evaluate conditions and determine when operations can safely resume."

Union Pacific (UP) posted a service announcement on their website, as well, stating that rail operations along the Gulf Coast from Brownsville, Texas, to Lake Charles, Louisiana, are currently suspended due to high water and storm damage.

"As weather and access to storm-damaged areas allows, we are inspecting and repairing track, bridges and signals to return to service as quickly and safely as possible. Until the storms move out and the flooding recedes, we are not able to access or inspect our tracks and facilities in the greater Houston area. Rain and flooding continues in Houston and east of Houston into Louisiana. Routes through San Antonio are opening up which will allow us to run trains both north and south between San Antonio."

The UP added, "We have issued embargoes on all rail traffic destined to stations on the Gulf Coast and inland that comprise our Houston Service Unit. The embargo is for all rail traffic, including intermodal equipment and automotive shipments. Customers should consider diverting cars away from the impacted area."

Water in the Houston Ship Channel, one of the nation's busiest waterways, is at levels never seen before, according to news reports there. An "alert" on the Port of Houston website stated that, "All Port Houston facilities will remain closed on Wednesday, Aug. 30, due to the weather impact across Houston. We will be continuing to monitor weather conditions to determine when operations can safely resume. At this point, no indications from the U.S. Coast Guard (USCG) on when the Houston Ship Channel will reopen for vessel transits. Updates will be provided as more information is available."

A press release sent to DTN from the Port of Corpus Christi (Port) said that the Corpus Christi Ship Channel (Ship Channel) remains closed as the USCG is maintaining condition "Zulu" for all areas of the ship channel. Zula is the official marine term that suspends operations and closes ports to incoming and outgoing vessel traffic. The Coast Guard has issued a modified Zulu status for the Inner Harbor to allow for vessels with up to 20 feet draft to operate.

The port is in close coordination with federal, state and regional agencies, including the U.S. Army Corps of Engineers (USACE) and the USCG, to expedite hydrographic surveys of the ship channel to identify shoaling areas as a result of the hurricane. Surveying efforts have been hampered by weather conditions, but as weather improves, it is anticipated the remaining areas of the channel, which require surveys, will be completed in the next 48 hours.

"Power has been restored to most Port of Corpus Christi Authority (PCCA) facilities. Port personnel are working round the clock in assessing facility damage and have recalled all Tier 2 employees. It is anticipated that all remaining Tier 3 employees will be recalled in the next few days. The PCCA continues working toward achieving normal business operations by September 4th," said port officials.

Mike Steenhoek, executive director of the Soy Transportation Coalition, told DTN, "From a soybean and corn logistics perspective, the larger concern occurs if the consequences of Harvey extend farther east to the 230-mile stretch of the Mississippi River from Baton Rouge, Louisiana, to the Gulf of Mexico."

According to USDA, the Gulf of Mexico region accounts for 60% of soybean exports, 59% of corn exports and 14% of wheat exports. During the week ending Aug. 17, approximately 18.4 million bushels of soybeans were exported from the Mississippi Gulf, the equivalent of eight to 10 ocean vessels.

Steenhoek said the Harvey storm system may increase the risk of prolonged heavy rain in southern Louisiana. "Some estimates for rainfall include 10-15 inches in the Baton Rouge to New Orleans area. Grain handlers who export from and service the Mississippi Gulf region are taking Hurricane Harvey very seriously. Obviously, heavy rain will delay the ability to load ocean vessels and unload barges. Heavy winds and storm surges, if they occur, could damage the export terminals."

As of Aug. 29, the heavy rain had not yet hit the Mississippi Gulf region. The midday DTN weather forecast on Aug. 29 said that Tropical Storm Harvey was located 115 miles south-southwest of Cameron, Louisiana, and was moving toward the north, northeast near 5 mph. A general north-northeast track is expected Tuesday and Wednesday.

Previous Post (Transportation Board to CSX: Get Your Service Back on Track)
Next Post (Vietnam Lifts Suspension of US DDGS Imports) 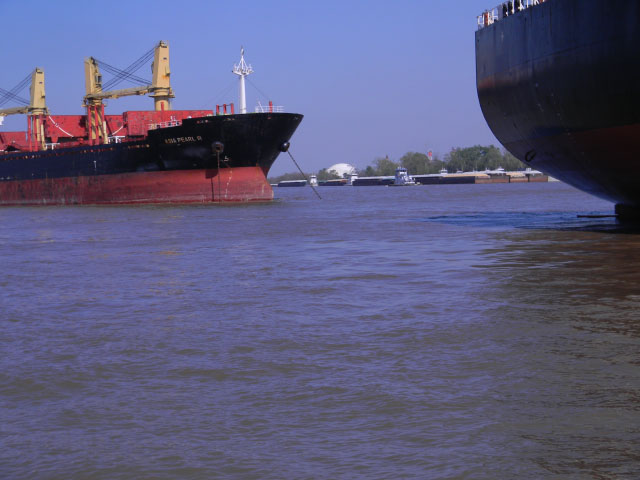