Throughout the state, farm fields were swallowed up by the heavy rains and overflowing rivers and streams. Crops that had been waiting to be harvested such as cotton, soybeans and peanuts, to name a few, were either destroyed or sustained heavy damage. On Oct. 11, USDA NASS reported that only 11% of North Carolina soybeans and 18% of peanuts had been harvested as of Oct. 9 and cotton was 90% opening bolls. According to reports from the North Carolina Department of Agriculture and Consumer Services (NCDA&CS), cotton, soybeans and peanuts are still under water in some counties.

UP TO 50 INCHES OF RAIN IN ONE MONTH

Todd Boyd, a farmer from Pinetown, North Carolina, told me, "We had 25 to 30 inches of rain in the three weeks prior to Hurricane Matthew thanks to Tropical Storm Hermine. Matthew dumped another 12 to 20 inches on us, and between the two storms, nearly half of the cotton in our region was wiped out."

I spoke to Boyd by phone as he was combining what was left of his soybean crop in Beaufort County. In some counties near the rivers where dikes overflowed or broke, soybeans were a total loss, he said. He told me that his soybeans were on higher ground and he expected about a 15% to 20% loss. However, his 2,000 acres of cotton will not fare as well.

Boyd said he had defoliated his cotton and picked about 40 acres before the storm. He expects that three-fourths of his cotton crop was lost or damaged. He and other farmers are waiting for insurance agents to inspect the crop. He told me that cotton insurance was unlike other crop insurance, because only the yield loss is estimated and quality discounts are not taken into account. Boyd said that after Hurricane Joaquin wreaked havoc on North Carolina nearly one year ago, insurance agents told them to pick the cotton, which ended up actually costing the farmers money. "By the time we added up our cost to pick cotton and then were hit with severe quality discounts, we stopped picking in December 2015," said Boyd.

"This year, of the 1,000 to 1,200 pounds per acre cotton crop expected before the storms, we may get a 300-pound-per-acre crop if we are lucky. This is the second year in a row we have faced a disastrous cotton crop thanks to excessive rains from hurricanes/tropical storms," added Boyd.

"Peanuts are from 50% to 80% damaged from what I have heard so far," said Boyd. "My farm is about 100 miles from the coast and what is called the Blacklands of North Carolina where most of the peanuts and tobacco farms are. Fifty miles west of me in eastern North Carolina, over 2 million head of poultry, mostly chickens, were drowned and that's a light estimate. That area is also expected to see losses in the sweet potato and peanut crops; most of the tobacco had been harvested."

On their website on Oct. 13, NCDA&CS said, "The flood water hasn't receded yet, but initial reports show that North Carolina's agricultural industries took a beating from Hurricane Matthew. State ag officials do not have damage estimates, but the 48 counties affected by the storm are some of North Carolina's largest Ag counties."

"The eastern counties represent 71% of the state's total farm cash receipts," said Agriculture Commissioner Steve Troxler. "While lots of crops were harvested before the storm, many crops, such as soybeans, sweet potatoes, peanuts and cotton, were just in the early stages of harvest."

As Hurricane Matthew headed back out to sea after leaving behind destruction along the East Coast, North Carolina was still feeling the aftermath days later. Over a foot of rain fell in North Carolina, which caused rivers to swell and dams to be threatened, with crests expected the weekend of Oct. 14.

Residents continued to be evacuated during the week after Matthew left. Interstate 95, a major East Coast highway, was still closed midweek from Lumberton to Fayetteville and other spots where the road washed away. Until that highway opens, truckers hauling grain, livestock or other products will likely be detoured or in some cases stalled. The state Department of Transportation says many of the damaged roads may be repaired in the next week or two, but parts of the highway that washed out may be closed until November. 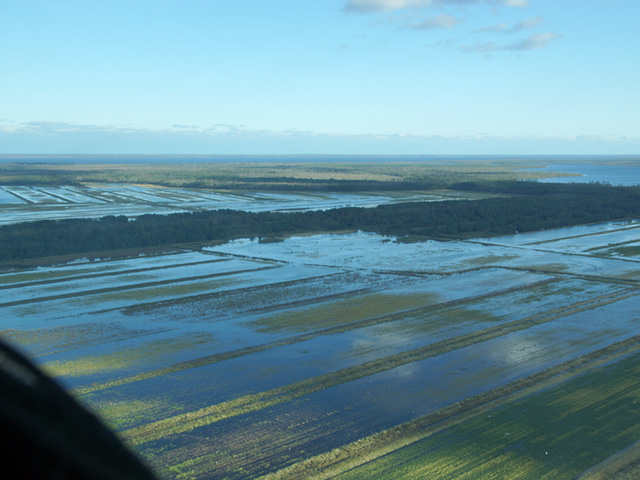