Heavy rains that fell in southern Minnesota, southern Wisconsin and northern Iowa the third week of September flooded fields and roads and delayed harvest progress for many farmers. While the weather has turned drier in those areas since then, some farmers face a difficult decision following the flooding: What to do with grain that was exposed to flood waters.

The Food and Drug Administration has set guidelines for the safety of food crops when flood waters contacted the edible portions of the crops. FDA states: "Assuring the safety of flood-affected food crops for human consumption is the responsibility of the growers that produce and market these crops." FDA policy does not change the applicability of other federal or state regulations or the grower's responsibility to comply with those regulations.

According to FDA: "If the edible portion of a crop is exposed to flood waters, it is considered adulterated under section 402(a) (4) (21 U.S.C. 342(a) (4) of the Federal Food, Drug, and Cosmetic Act and should not enter human food channels. There is no practical method of reconditioning the edible portion of a crop that will provide a reasonable assurance of human food safety. Therefore, the FDA recommends that these crops be disposed of in a manner that ensures they are kept separate from crops that have not been flood damaged to avoid adulterating 'clean' crops." Here is a link to the guidelines: https://goo.gl/…

The Minnesota Grain and Feed Association said in a recent newsletter, "Given recent heavy rains and flooding in southern Minnesota, grain buyers need to be reminded that the FDA has policies related to flood-damaged grain. The FDA considers flood water to be inherently unsanitary and deems grains, oilseeds, feed and feed ingredients (including distillers grain) and food that has been in contact with flood water, to be unfit for human consumption or animal feed unless reconditioned (in the case of animal feed). This includes grain and oilseeds that might be destined for an ethanol plant or soybean processor because of the resultant use of the co-products (DDGs and soybean meal) in animal feed."

The FDA is concerned because flooding events can present a potentially hazardous public health risk. In some areas, crops may be submerged in flood water that may have been exposed to sewage, chemicals, heavy metals, pathogenic microorganisms or other contaminants. Even if the crop is not completely submerged, there may still be microbial contamination of the edible portion of the crop. There is also the potential for plants to take up chemical contaminants. In addition to the direct presence of contaminants noted above, mold and toxins may develop in the crops as a result of exposure to the water.

The FDA also notes that for crops that were in or near flooded areas but where flood waters did NOT contact the edible portions of the crops, the growers should evaluate the safety of the crops for human consumption on a case-by-case basis for possible adulteration. "We encourage growers to work with state regulators and local FDA offices to assess their unique situations and to take into consideration all possible types and routes of contamination from flood waters in determining whether a particular crop is adulterated," said the FDA.

HOW DOES A BUYER TELL IF FLOOD-DAMAGED CORN IS BLENDED?

Bob Zelenka, executive director of the Minnesota Grain and Feed Association, told me: "In the immediate area impacted by the flooding, grain buyers are nervous. It would appear that more soybeans than corn will be affected by the flooding in southern Minnesota and impacted by the FDA policy concerning flood-damaged grain. Grain elevators are certainly expected to handle a high volume of grain that is marketable. However, mold issues are quite variable by corn variety, so buyers are still trying to ascertain how extensive the problem is in corn. Several have indicated that that they will be using a black light on any suspicious-looking or smelling corn. The same smell test will determine if they handle impacted soybeans. Some terminal markets have already indicated that they will not accept flooded soybeans as a result of the FDA directive, which means that local elevators will likely implement a similar policy."

When I was a corn buyer in Wisconsin, we had a similar situation in the same areas as those currently affected, where corn sat in water close to harvest time. There was corn that had not been flooded, but sustained mold damage. It was nearly impossible to probe a truckload of corn and then pick through the pan sample and decide what corn sat in flooded waters and what corn did not. My first line of defense was to reject the heavily mold-damaged corn. As for the rest, for both of the plants I bought corn for, I made sure to scrutinize more than usual the loads from the areas that had been flooded.

The most important test we did on any of the corn samples containing mold was a black light test, which uses ultraviolet light to illuminate a bright yellow-green fluorescence of a fungal product associated with aflatoxin. It was used only as a preliminary test, but if the grain sample "glowed," a chemical analysis was necessary to determine the actual concentration of a toxin. There are do-it-yourself tests that can be purchased, but I sent the suspect corn samples to the Wisconsin Department of Agriculture, Trade and Consumer Protection grain inspection unit for more thorough testing. It may have been more expensive to test each sample that way, but it was worth it in the end to make sure that our bins were not contaminated by dumping toxic corn in with the good corn.

I spoke to a farmer in southeastern Minnesota who has been farming for more than 35 years, and he told me he has seen his corn flooded more times than he cares to remember. He said in all of those times, he followed the guidelines set by the FDA and destroyed the affected corn after his insurance deemed it a loss due to flood damage. He told me there are other farmers who may choose to harvest that corn, especially if they are unsure if it "fits" into the guidelines set by the FDA. He said as painful as it was to destroy a crop he had looked forward to harvesting, he believes that the FDA guidelines were published to make sure that U.S. crops remain safe for domestic and export consumption. 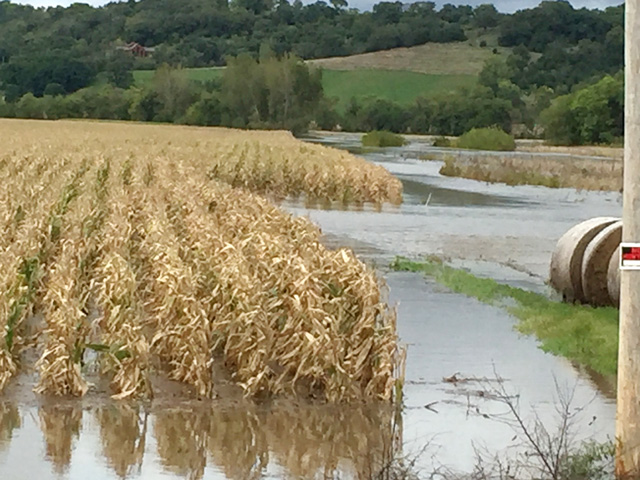