The Old Vicksburg Bridge in Vicksburg, Mississippi, is beginning to resemble a pinball machine as river barges have bounced against piers under it. Those collisions have also affected rail transportation in the area.

River basis is slowly recovering from the more than one month of flooding, and rail basis to St. Louis and the Gulf overall has been improving a little. If barges are unable to make it to the Gulf to load waiting vessels, rail may be the best way to get it there for now.

Between January 12-21, five tows have been unable to safely navigate under the bridge due to high water and very strong current. Barges have hit the piers as the current pushed them to the side as they tried to pass under the bridge. During "calm waters", the bridge still looks like a tight squeeze; add the fury of a flooded river and you have what is obviously a recipe for disaster.

After the fifth collision on January 21, the Captain of the Port issued a waterway restriction from mile marker 363 near Natchez, Mississippi, north to mile marker 438 near Vicksburg. Lt. Brian Porter, a Coast Guard spokesman, told local news organizations, "We are not allowing any tows to transit those bridges. A light ship (tow boat only) will be able to transit the bridges, but nothing pushing a barge. We have a strong current in the river and what we're trying to do is use a common sense approach."

There has been no scheduled reopening for that area yet and in the meantime, barges will likely stack up on the side of the river waiting to pass. The longer that portion of the river is closed, river terminals north of there may have to post weaker basis in order to slow movement of grain until the river reopens.

Here is a link to the bridge and its history: http://goo.gl/…

The Kansas City Southern Railway Company uses the Vicksburg railroad bridge and is likely grateful that the restrictions were finally put in place. The KCSR serves the central and south central U.S.; its parent company is the smallest and third-oldest Class I railroad in North America still in operation. During the nine days of collisions, the KCSR had to stop running on and off for a total of about 24 hours as crews inspected the bridge, which can put other connecting railroads at a standstill as well.

While the river levels are falling at Vicksburg, it is still above flood stage of 43 feet and is not expected to drop below that until the end of January. In the meantime, the strong currents caused by the high water will continue to make river travel treacherous. http://goo.gl/…

Farther south to New Orleans, there have been two accidents involving runaway barges. The latest accident closed the Mississippi River January 19 between mile markers 50 to 53 in response to a 22-barge breakaway.

In a press release, the U.S. Coast Guard stated that several deep-draft motor vessels sustained damage when barges broke away and hit them. "A portion of dry-bulk soybeans from one of the vessels entered the river and the release has since been secured," the USCG stated. "The three affected deep-draft vessels are safely anchored. ... All of the barges have been accounted for and secured except one that is pushed up against the left descending bank." Late Friday afternoon January 22, the Coast Guard reopened the area and was only allowing "single-file passage, for now, to clear a logjam of vessels trying to get through."

The NWS reported on January 23 that the Mississippi River at Baton Rouge has already crested and is expected to fall very slowly to around 41.3 feet by Thursday January 28, but additional rises may be possible thereafter. Flood stage at Baton Rouge is 35 feet. http://goo.gl/…

The USCG continues to have safety protocols in place allowing daylight-only traffic in certain areas. While the high water at the Louisiana ports is slowly declining, levels are expected to remain high for the rest of the month. Certain areas of the port are requiring a temporary reduction of max ocean vessel draft as a result of shoaling caused by the fast moving river. Logistics and all movements are taking longer due to the treacherous river conditions causing slowdowns and backups at the ports.

The Bonnet Carre Spillway opened on January 10 to alleviate flooding and to keep the volume of Mississippi River flows at New Orleans from exceeding 1.25 million cubic feet per second. The U.S. Army Corps of Engineers stated, "Operation of the structure will relieve pressure on main line levees, maintain river stages, and regulate the flow of the river from the spillway southward."

As of January 22, 210 of the spillway's 350 bays are open, diverting as much as 188,000 cubic feet per second of water from the swollen Mississippi River into Lake Pontchartrain. The Corps has announced the spillway will be kept open until at least the first week of February, as long as the river continues to fall. 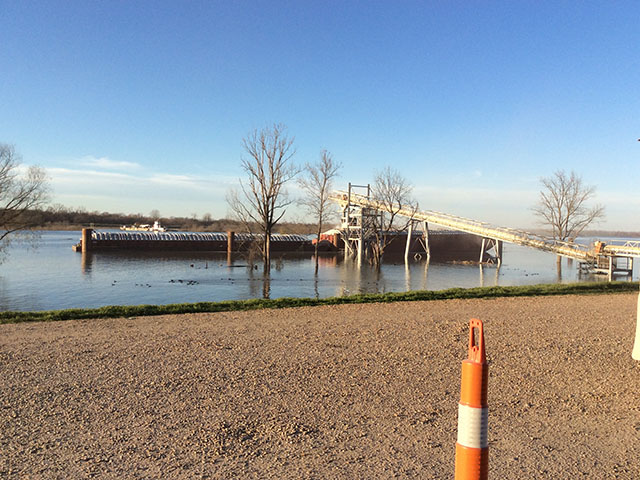