The 2015 towing season on the Upper Mississippi River was extended by a few days due to unseasonably warm weather in the upper Midwest, allowing the navigation industry more time to ship this year's bumper corn crop. But, on Dec. 3, the U.S. Army Corps of Engineers, St. Paul District, locked the last tow of the season out of St. Paul, Minnesota, signaling the beginning of the end of this year's river transport season.

"The Motor Vessel Charlie G was locked through Lock and Dam 2, near Hastings, Minnesota, with 12 barges," the USACE said in a press release. "Traditionally, the last tow heading south of Lock and Dam 2 marks the unofficial end of the navigation season for the Twin Cities portion of the St. Paul District."

The 2015 navigation season started March 25, when the Motor Vessel New Dawn reached St. Paul. "It was a great year for navigation," said Jim Rand, St. Paul District locks and dams chief. "We saw a slight increase in the annual tonnage with an estimated 96.7 million tons of commodities being shipped within the St. Paul District." The 10-year average for commodities is nearly 93 million tons. Last year, the Motor Vessel Mary K. Cavarra was the last tow of the 2014 season after being locked through Lock 2, Nov. 20, 2014.

The Corps is now scheduled to close Lock and Dam 9, near Lynxville, Wisconsin, for winter maintenance Dec. 9; the lock was originally scheduled to close Dec. 7. Once the lock is closed, there will be no vessels moving through it until reopening next spring.

"This winter rehabilitation work is scheduled approximately every 15 to 20 years on each St. Paul District lock," the corps said in an email. "Lock 9 was last dewatered in 1993. The lock is now scheduled to reopen March 17, 2016."

While a few days may not seem like much to most people, those shipping by barge are grateful for the extra time. Barges don't move very fast -- typically about 30 to 40 miles per day -- which translates to about 30 to 40 days to reach New Orleans, Louisiana, from the Twin Cities district without any slowdowns along the way.

An Upper Mississippi River terminal manager told DTN he never had a loaded barge "freeze in" and once it was off his dock and consigned, it became the barge line's responsibility. "They usually left in plenty of time and watched the weather very closely," he said.

He also told DTN that empties usually don't get left behind. "There may be loaded barges of cement that were left behind to be unloaded during the winter or in the spring before anything else made it back upriver."

On December 14, the Corps will also close Locks 13, 14 and 17 for winter repairs. Lock and Dam 17 is located approximately three miles upstream from the mouth of the Iowa River near New Boston, Illinois. Lock 21 at Quincy, Illinois, will close for dewatering and repair on January 4. Those locks are expected to reopen on March 4, 2016, weather permitting.

Barges heading down river may run into rock removal operations that are tentatively scheduled to resume the second week of December between St. Louis and Cairo. Traffic will be able to move through the area, but tow size restrictions of 15 barges during daylight hours will be in place. The project is expected to last through the middle of February. Natural rock formations become exposed when water levels drop below zero gauge and this area has been problematic since the historic low levels of 2012. 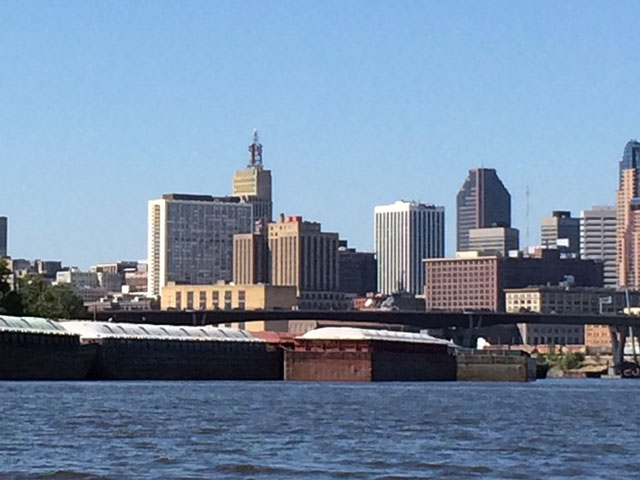