While the secondary freight bid/offers rose again early last week, producers in the Midwest reported the market started to "cave" late last week and into this week. USDA's Grain Transportation Report stated that for the week ended January 16 the average shuttle bids/offers for February were $1,737.50 per car above tariff, $137.50 higher than the prior week. While there were no bids/offers the prior week for non-shuttle railcars, the bid/offers picked up last week and were $975.00 above tariff. Non-shuttle cars were not in demand as much as shuttles due to the railroad placing shuttle trains for loading ahead of the rest, in order to catch up from the slowdown in December into early January. Since January 16, shippers and exporters have reported that secondary shuttle freight has gone from as high as $3,000 to $4,000 per car down to $1,500 to $1,800 for the week ended January 24. The drop in freight has affected corn and soybean basis levels for shuttles heading to the PNW with corn dropping 20 cents from one week ago January 17 and soybeans dropping 38 cents from one week ago. The spot Minneapolis spring wheat premiums were also affected, down 65 cents to $1.00 for 14% protein and down 80 cents to 35 cents for 15% protein in ranges of low to high.

Rail logistics improved last week after extreme cold and heavy snowstorms throughout the U.S stalled car movement, but a return to poor weather conditions prompted the BNSF to post a service delay on their website January 23. The website stated, "BNSF service is being impacted by extreme cold and winter weather conditions across the Central and Northern Regions, which includes Illinois, Kansas, Missouri, Minnesota, Montana, North and South Dakota. The extreme cold, ice, and snow drifts are resulting in slow operating conditions. This weather event is also affecting other carriers in Chicago, St. Louis and other interchange locations." While warmer weather is expected over the weekend of January 25 and 26, DTN Senior Ag Meteorologist Bryce Anderson said conditions will worsen after that.

"These areas are going to be bitter cold during next week," said Anderson. "There will be a little bump for daytime highs into the mid to upper 20s on Wednesday, but otherwise you're looking at 0 to -5 F Mon/Tue and then the teens Thu/Fri. Lows will be -10 to -20 F Mon/Tue, then zero to -5 F the rest of the week. This will quite possibly be the coldest shot of the season."

Logistics along the river system have not improved and areas are treacherous once again, especially along the Illinois River where ice chunks have nearly shut traffic down. River sources have stated that the Illinois River has 100% ice coverage with some operators shutting down because of the danger the ice poses and conditions are expected to get worse. The conditions at St. Louis are not as dire, but they are experiencing not only ice, but low water levels as well and the problem runs south to Cairo. In addition, the rock removal project at Thebes, Ill., is causing delays for barges moving through that area. The USACE has reported that the rock removal will be performed during 12 to 15 hour shifts during the day and will limit tows to a 15-barge max. They have also reported that traffic could be stopped for up to 12 hours per day as the work continues. USDA reported that, "For the first three weeks of the year, Ohio River grain barge movements have not been as impacted by the weather as have the Upper Mississippi and Illinois River shipments. Ohio River Locks 52 reported 874,000 tons of grain for the year, significantly higher than Mississippi River Locks 27, which moved 527,000 tons so far this year. Locks 27 down bound barge movements may be impacted by rock removal work located below Locks 27."

Barge freight costs this week have done the opposite of rail and have moved higher since January 17. While freight in the Illinois River had risen by 50% at midweek, there are currently no bids/offers for freight in that area for the rest of this week into next due to the serious ice problems. Freight elsewhere has risen as other sections of the river try to find empties to move soybeans contracted for export out the Mississippi Gulf. Freight in the St. Louis corridor was up 25% from one week ago Friday, up 35% in the Cairo to Memphis corridor and up 25% in the Lower Ohio River corridor. Barges in the lower Mississippi River and those able to get through St. Louis totaled 303 and for the week ended January 18; USDA said 888 grain barges were unloaded in New Orleans. For the week ended January 16, there were 50 ocean-going grain vessels loaded in the Gulf, which was 108% more than last year. There are 88 vessels expected to load in the next 10 days which is 52% more than the same period last year.

Just to review how rough river conditions were last year at this time, (besides the drought having depleted water levels) here is an excerpt from my daily basis comments of one year ago: "The barge freight market has been weak and there are continued reports of empty barges sitting idle. To add to the ongoing misery, the Army Corps of Engineers reported Tuesday that a vessel collided with a gate at the auxiliary chamber of Lock 27 near Granite City, Ill., which is the busiest lock on the waterway. The main chamber at Lock 27 has actually been closed for repairs until March of this year. There was a report Wednesday morning that the lock was reopened after temporary repairs and that nearly all the vessel backup has been cleared. The corps may have to shut down the lock for a few hours a day to fully repair the damage, which would once again slow traffic." 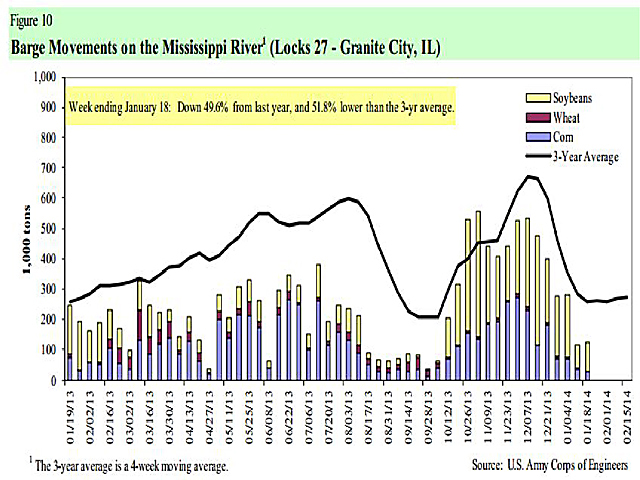