Here are Steve's answers to questions recently submitted by readers:

I am having a heck of a time when I am alone and changing back and forth from my front-end loader bucket and hay spear. It seems the tilt cylinders that tilt the bucket back and forth seem to always be out of alignment with the pinholes in my bucket or hay spear. When I try to move the joystick to even the ends of the cylinders, I never know which cylinder will move. So, back to the tractor I go -- again and again -- trying to align both cylinders so I can pin them to the bucket. A friend said my cylinders are out of phase. The lift links on the back of my tractor both come up and go down to the same height, and stay the same level. What's the best way to pin the bucket to the loader by yourself?

Your lift links on the back of your tractor are raised and lowered by a common shaft. Therefore, they will always stay together when coming up or going down. Your loader cylinders will only always stay the same if they are hooked to a common structure like your bucket or newer loader hitch options. Your loader cylinders are not out of phase. A phased setup is when the pressurized oil enters one end of a cylinder and pushes out the oil in the other end of the cylinder into another cylinder.

In other words, the pressurized oil from one cylinder activates another cylinder. When air gets in the cylinders, they will not raise a machine equally and become out of phase. Air can usually be vented through a vent hole in a cylinder to allow oil to replace air in the system.

Your loader cylinders work according to the path of least resistance since they are both on the same circuit (see photo).

So, try to pin one side of the bucket. Doing this will allow the free cylinder to extend or retract by itself since less pressure is needed to move it in or out than the one hooked to the bucket. Now you are in control of the unpinned cylinder and can stop it where needed to slip in the pin with the loader control valve.

I changed over my old 6-volt system to a 12-volt system with an electronic ignition on my 8N Ford. Voltage regulators, generators, coils, points and condensers were a never-ending problem. I don't want to even talk about the time my son came home from college and wanted to surprise me on my birthday by tuning up my tractor. I got a big birthday surprise OK -- when he showed me the distributor that he had removed from the tractor. He had not taken 8N 101 that semester. So, my question is now with the tractor on 12 volts and a voltmeter instead of an amp meter, the voltage shows a little over 14 volts with the engine running. Is my 12-volt battery being overcharged?

There is nothing wrong with your electrical system. The reason your voltmeter shows a little over 14 volts in your battery with the engine running is because your alternator is actually a 14-volt alternator that is regulated from 14.1 to 14.8 volts. Even though you have a 12-volt battery, the 14-volt alternator is needed to keep the battery fully charged with lights and other electrical drains pulling on the battery. By the way, sometimes college professors don't tell their students that the firing order on an 8N Ford is 1-2-4-3 -- in case your son decides to change the plug wires.

I have a question that might be a safety concern. I have a 2355 John Deere that I run with no batteries in it. It runs fine that way, but could I hurt anything?

If you start your tractor with jumper cables and the engine is to be running for a short period of time without a battery in the tractor, leave the key on -- do not turn off the key until you have shut down the tractor by pulling the kill cable. Try not to raise the engine speed much higher than idle and do turn on lights to use additional current while the engine is running. Make sure the positive battery cable is not allowed to ground -- insulate the battery cable -- use tape, rubber, whatever to insulate the cable. This is important because the alternator will be trying to charge batteries that are not there. If the loose positive cable goes to ground, it can damage the alternator or regulator, or even cause a fire. Batteries and battery maintainers are cheap compared to electrical repairs. 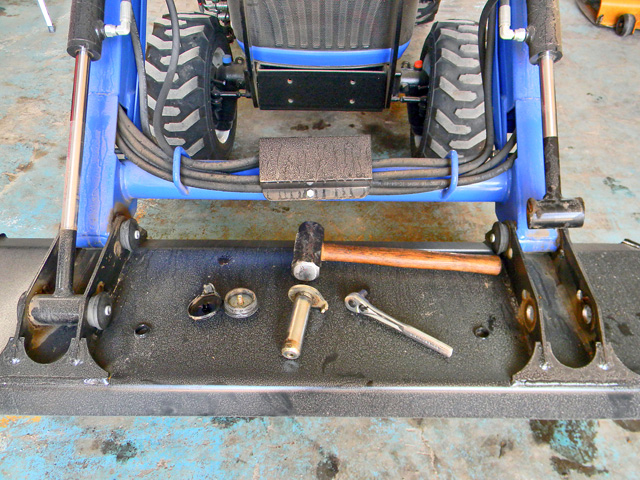