Spring tornados come early in the Southeast United States, to Chelsea, Alabama, where I live. April is generally our tornado month. But, in reality, tornados can descend on us almost any time of the year. In 2015, on Christmas Day, an EF2 tornado (winds of 111-135 miles per hour) tore through a nearby Birmingham neighborhood. That storm injured five and damaged or destroyed 72 buildings.

Earlier this year, an EF3 tornado and its 136-165-mph winds crashed through several neighborhoods just a few miles from where I live. These winds leveled 100-foot-tall pines, damaged a school and destroyed homes -- one home owned by a member of the church I attend.

Within a couple of days, my church's Alabama Baptist Disaster Relief chainsaw team rolled out to help clear trees and debris. Disaster Relief emphasizes safety at every turn. When we cut, we are required to wear helmets with visors, ear protection, cut-resistant Kevlar gloves and chaps, plus over-the-ankle boots.

And yet ... there is that human factor. We get tired. When you get tired, you get sloppy.

I learned a lesson in fatigue back in 2015. I was working through a big tree in a too-small backyard, which was surrounded by chain-link fence. It was toward the end of a long day. I was in a hurry, and I was tired. Among all the safety rules we learn, one is highly important: Before you take a step with a running chainsaw, engage the brake.

I stepped across a branch with the saw idling, and I did not engage the brake. The chain was turning slowly. As I brought my leg up to step over a branch, the saw went down and cut into my chaps.

You can see in the photograph accompanying this blog the result of that momentary safety lapse. The saw would have put a 6-inch cut right into my thigh if I had not been wearing chaps. Cut the femoral artery there, and death can come in minutes.

The chaps did what they were supposed to do. I did not.

Look, I get it. Few cutters wear the safety gear. Of course, they are among the 36,000 chainsaw and chainsaw-related injuries rolling into emergency rooms every year, costing $350 million in medical treatment ($12,000 per incident, on average). Not everyone survives that trip. An older number reported by the government's Occupational Safety and Health Administration counted 243 chainsaw-related deaths in 2012.

Most injuries from the saw are to the hands and fingers, to the knees, legs, ankles and feet. Eighty percent of injuries are lacerations made by dirty, oiled chains. Ninety-five percent of those injured are guys, 30-59 years old. One study counted 139 amputations and 983 head injuries between 2009 and 2013.

It's all too easy to become a statistic. Cut without safety gear, ignore overhead hazards, toss the safety manual aside, fail to account for the unstoppable roll of a trunk weighing several tons, and grave injury is a moment away.

The cutting chain of a saw at full throttle rips across wood at 5,000 feet per minute, or 83 feet per second. More than 600 cutting teeth pass by a single point in one second. Raked across an unprotected leg, the damage caused in one second (the time it takes to say the words "600 cutting teeth") is sickeningly catastrophic. The average chainsaw cut requires 110 stiches to close.

"First thing," he says, "look up." Branches dangling up in the trees are called "widow makers" for good reason. They drop to the ground without warning. Widow makers kill.

Second, look around for power lines. Is the power line to the house or barn still attached? If not, where are they? How about lines running along the road or overhead, across the property? If there is a wire within a 10-foot radius of the tree you want to work on, stay away. Live wires kill.

Third, make an assessment of the damage. "Don't mess with trees on the house," he says. Standing on a wet roof with a running chainsaw, cutting branches that may spring into your face is just poor practice. It is better, he says, to lift trees from a house by a capable skid steer loader or a tractor with forks or grapples. The riskiest idea is cutting branches while standing unsecured to the tree on an extension ladder. It is the stuff of YouTube lore, of chainsawers falling from ladders toppled by a falling branch. The result is often less humorous, as the operator tumbles to the ground, running chainsaw in hand.

Professional cutters understand the pressures of twist and compression. Here's what they see.

-- A tree bent sharply by another tree can suddenly spring up if the object holding it down is removed.

-- The limbs of a downed tree are under tremendous pressure. Cutting them without understanding the directional force of that pressure is highly hazardous.

-- Root balls are especially dangerous. If the operator cuts through the trunk too close to the ball, the remaining trunk section and root ball can suddenly sit upright.

-- A skilled operator learns to see the potential for a phenomenon known as barber chairing. That occurs when either wind, the lean of the tree or branch load causes a quick, rising split through the trunk of a prematurely falling tree. Splinters longer than the average man is tall fly high into the air. The barber chair gets its name from the end result. The seat of the barber chair is the partial cut made by the operator through the trunk. The back of the chair is the vertical piece left as the tree split up the middle.

"You need to take the time to look at a tree," says Tim Ard, of Forest Applications Training, in Rome, Georgia. "Move from side to side. Look at the tree and where it might go (if it's not already on the ground)."

The best way to begin cutting a tree already lying on the ground is to start at the butt end of the tree and work forward -- while being mindful of the weight of the root ball, Ard says. Try not to pass by limbs as the work progresses toward the crown of the tree -- unless they are supporting the trunk. Never cut above your shoulder, always cut with two hands, and never cut without an escape route. The escape route should be clear to at least 15 feet from the tree, at 45-degree angles from the work.

There should be no more than one cutter working on a tree until the tree is fully on the ground. Keep branch pullers away until the tree is cut. No one should be holding or pulling anything while the saw is running. But it is a very good idea to have an observer nearby, someone watching for hazards the chainsaw operator may not see.

If you can spend a few minutes looking over some material on chainsaw safety, go to: www.forestapps.com, run by my friend Tim Ard.

And wear that helmet, gloves and chaps. 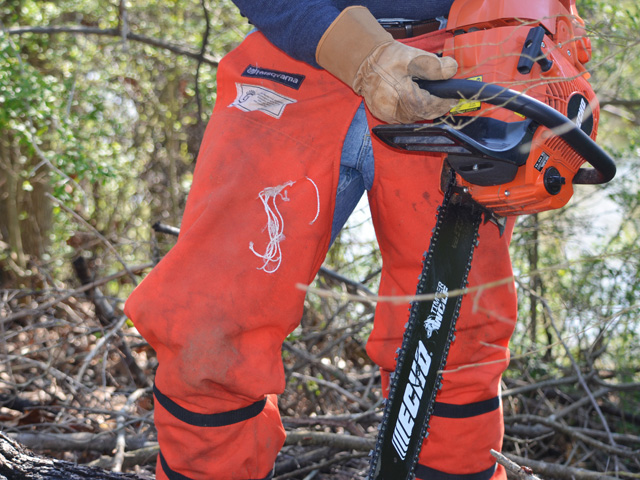