LOUISVILLE, Ky. (DTN) -- Despite tight margins in most of agriculture today, the general mood of those attending the 52nd annual National Farm Machinery Show here this week was strikingly upbeat, according to exhibitors.

Thousands of people filled the 1.2 million square feet of the Kentucky Exposition Center to get close-up views of various agricultural products both big and small. The largest indoor farm show runs through Saturday, Feb. 17.

Crowds in the first two days of the 2018 show seemed to be larger than in past years, according to Charissa Rubey, president of Dakota Micro Inc. The North Dakota-based company manufactures a complete line of video cameras to be used in different agricultural applications.

In addition to more people, the attendees of the show also have showed more of an interest in purchasing products despite some profitability concerns, Rubey said.

"I think they have been more optimistic than in past years," Rubey told DTN. "Yes, it has been dry in places, and we still have some low prices, but I think things like the tax changes have had a positive effect on those at the show."

Rubey said her company has been in business for 15 years. She said she knows the ag business is cyclical, and currently some of her customers continue to struggle making money. Nevertheless, her business has been able to ride out the downturn by expanding into other markets like departments of transportation, construction and mining, as well as offering video camera systems that are more "middle of the row," she said.

One selling point the company has built its business on is having their video equipment manufactured in the U.S. With the exception of the magnet that holds the system in place, every other component of the system is made here in the U.S., she said.

"As you can imagine, that is a great selling point," she said.

Across the exhibit hall, Ray Blunider sees a similar situation as Rubey does. Blunider is a principal in Midwest Perma Column, a Peoria, Illinois, manufacturer of concrete columns for post frame and metal buildings. The company has been exhibiting at the show since 2004.

People attending the 2018 show seem to be interested in his company products, Blunider said.

"I think maybe the crowds are down some yesterday (Wednesday), but most people here are pretty optimistic about what is happening in the ag industry," Blunider said.

While a majority of his business is in new construction, some of his products are used by customers who are replacing shed supports that have gone bad. He has been able to increase market share not by increasing sales but maintaining current customers and adding new ones, he said.

One challenge his company faces is the rising price of steel, a basic component of his concrete columns. In recent years, prices have been climbing, and to make money, he has had to increase the cost of his product.

"Most of our customers understand this situation, as our base products come outside of ag," he said.

Despite profitability concerns in agricultural today, the show continues to draw people from across the world and pour millions of dollars into the economy of Louisville. The 2017 show brought 300,000 attendees. The show is ranked sixth in attendance for the top 10 largest trade shows in the U.S.

The NFMS and the Association of Equipment Manufacturers (AEM) announced a verbal agreement last February to operate the show together. The 2018 show is the first to have AEM assist with management and co-promotion. In addition, AEM also has an equity position in the future growth of the event.

A popular event at the show continues to be the Championship Tractor Pulls, which are held in conjunction with the show. The five pulls sold more than 65,000 tickets in 2017. Drivers compete for the title of Grand Champion and more than $200,000 in prize money. 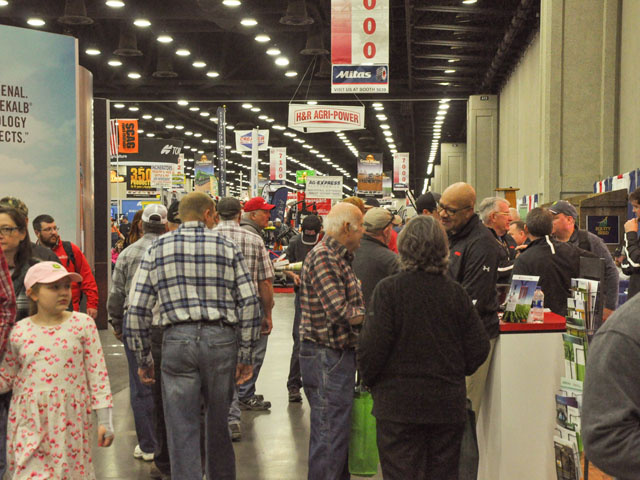