At a time when chemical application has grown increasingly more complex, AGCO this summer introduced a new series of RoGators with creative plumbing solutions to tackle those complexities. The new C Series is unlike anything AGCO has offered before.

AGCO's new plumbing system -- branded LiquidLogic -- has several innovative components, including a recirculation system that eliminates dead-ends where residue can be trapped.

With chemicals flowing in a closed system, there are fewer places for solids to form and contaminate the next batch of liquids. LiquidLogic's plumbing makes rinsing and clean out easier and more efficient, because the operator does not have to take off end caps or aspirator caps. This reduces his "time and risk" when rinsing, Miller said.

Typically, an operator has to prime the boom by spreading 40 to 60 gallons onto a field before his real work begins. Recirculation eliminates the need for priming because liquid is always flowing. That can save time and expensive product.

LiquidLogic also has a recovery system, which moves unused material back into the product tank for later use. It uses air pressure to accomplish this. Other sprayers on the market also use air pressure, but only to assist with cleanout by forcing liquids out of pipes and hoses.

"We have taken that a step further," Miller said. Air pressure on the C Series sprayers now forces product back into the tank where it can be recovered and used.

The recovery plumbing includes both booms and the reload station. It can reduce liquid left in the entire system to a total of 2 1/2 gallons, which can be sprayed at a lower rate onto a field, or it can be taken back to a holding tank for later disposal.

Creative plumbing isn't the only new feature in the C Series RoGators, Miller said. Its all-wheel SmartDrive system relies on a single hydrostatic drive with a divider block that splits flow to all four wheels evenly.

Each wheel motor has a speed sensor. If the system detects one wheel is spinning faster (slipping), the system redirects oil to the others three motors to keep the machine moving efficiently. 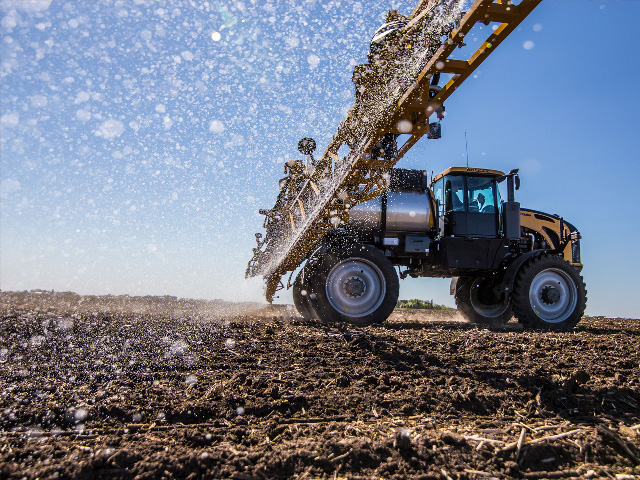