This week John Deere released its second-quarter results, and net income was up 62% over the same time last year. Before you jump to the conclusion that the farm machinery world suddenly has turned around, remember that Deere makes equipment for the construction, forestry and mining industries as well as consumer goods. That 62% increase reflects cost-cutting measures, an uptick in South American income and sales in non-farm sectors. Sales in Deere's Ag and Turf division, meanwhile, were up a modest 1%. Still, the key word might be "up."

Signs indicate that the farm equipment industry finally has steadied after a recent near freefall and is heading upward. John Deere Chairman and Chief Executive Officer Samuel R. Allen, said in April: "We are seeing signs that after several years of steep declines, key agricultural markets may be stabilizing."

Stabilized does not mean sales are booming yet. In general, farmers have not started replacing tractors, combines and other equipment they bought during the commodity price boom years of 2011-2013. That has led to layoffs, cutbacks and tight budgets at farm equipment manufacturing sites.

Sales numbers from the first quarter offered some hope. For instance, AGCO reported a sales increase of 6.3% in North American, and CNH reported ag sales increases of 10.5%, much of that in the Latin American and Asia/Pacific markets.

The under-40 hp tractor market has been a bright spot for manufacturers. At the end of the first quarter, the Association of Equipment Manufacturers (AEM) reported that sales for that segment were up 12.5% year to date over 2016. On the other hand, over-100 hp tractor sales were down 11.7% and 4WD tractors slumped 11% from 2016 sales. Combine sales were off 11.5%.

There is not much reason to think aggregate sales numbers will be significantly better soon, according to Charlie Glass, founder of Glass Management Group, which advises investors about the state of farm equipment manufacturers. Annually, he makes estimates in the fall for the sector's performance in the coming year. For 2017, he forecast a 1.5% to 2% increase in sales of large equipment 2017 over 2016. "So far they are well below my forecast," he told DTN/The Progressive Farmer.

Several factors contributed to slow sales so far this year. First, farmers still have plenty of relatively new equipment in their yards after the buying sprees of 2011-2013. Second, those looking to upgrade don't have to buy new. That buying spree and some companies' lease programs dumped thousands of low-hour used equipment onto dealers' lots. The used equipment inventory has dwindled (much to dealers' delight) in recent months, but customers still can find bargains. Third, commodity prices are still hovering in low places. That means farmers are struggling to make profits.

"Everything is dependent on net farm income," Glass said.

Everything, that is, but the under-40hp tractor market. "You have to take that completely out of the farm equipment market," Glass said. "They (under-40 hp sales) are based on the general economy. Dealers selling those tractors are blowing and going."

That partly explains some of the optimism farm equipment manufacturers and dealers are expressing. While larger units are stalled, small tractors are flying out the doors.

Optimism also arises from comparison with past slumping markets. Glass, who has been in the business more than 40 years, said today's farmers are in much stronger financial condition that farmers in the farm recession years of the mid-1970s, for instance. If farm incomes improve soon, many farmers will be in a solid position to purchase new equipment.

With that in mind, Glass made this prediction for the near future: "2017 and 2018 will be relatively flat for net farm income. I think 2017 might be the bottom. In 2018 we might see a slight increase. In 2019, we are going to see some growth back into this thing." The farm equipment market will follow suit. 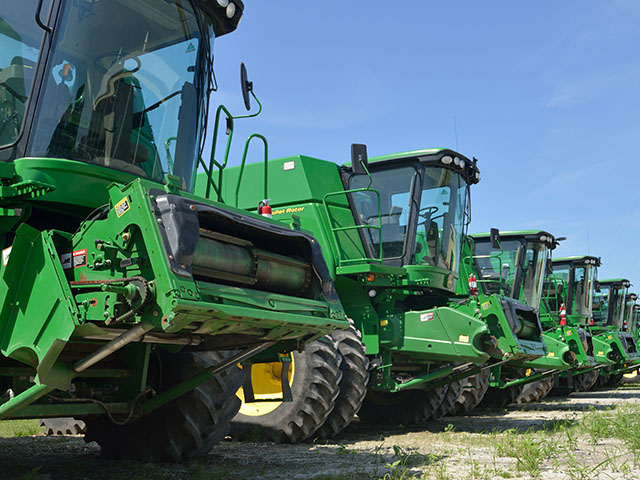