Joe Nichols' shop outside Cadiz, Kentucky, is an amazing sight. At the time it was built in 2008, the half-million-dollar project yielded 14,500 square feet of work and administrative space. The maintenance area alone measured 8,000 square feet. Even so, the floor space was all but consumed by a John Deere DB60 planter measuring 60-feet from tip to tip and the Deere 9230 with it.

The shop's main entrance opened by way of a 42-foot, full-clearance, bi-fold door. The operations center was wired with a mile and a half of digital cable. The computer server was tied to the outside world with its own high-speed T1 line. The shop was self-sufficient; a backup generator could run it entirely in the event of power failure. Each computer station had its own backup power.

"Some people might say this is over the top," says Joe Nichols, who farms 37,000 acres today. "But we operate on the right side of the decimal points," he added, explaining the thin operating margins by which his Seven Springs Farms functions. "The detail and the organization of this shop are part of that."

Today, Micheal Oliver, Nichols' partner and the day-to-day manager of Seven Springs, has a different perspective on the facility. "We are normally pretty proactive, but we should have made it bigger and longer to accommodate more equipment in the winter."

Among farm building salesmen, there is a well-known pitch: "You might build a shop too small, but you'll never build one too big." It's a clever come-on backed by a dose of reality.

DTN/The Progressive Farmer asked farm owners a question about their shop: What would you have done differently?

Dean Ahlbrecht's response was "bigger" when we asked him about the 80- x 105-foot shop he built a few years ago, outside Hector, Minnesota. "But that's not really a headline, is it?" he asks.

Marty Cummings, a fourth-generation farmer from Malcom, Iowa, says he laid down an important mandate when he built his new shop a few years back. "It better be big enough. We are only doing this once." The farm built 100- x 150-foot shop -- 15,000 square feet total with 20-foot sidewalls.

Among the doors opening into the shop owned by Future Vision Partnership, outside Kathryn, North Dakota, are three 42-foot-wide Powerlift hydraulic doors. Future Vision and its 37,500-square-foot shop are owned and managed by Vaughn Zacharias and his son Vance. Their Morton hybrid building features an open-webbed, steel-truss system that creates a clear span of 125 feet. The shop is 300 feet long, including a segregated 40-foot-wide x 125-foot-long wash bay.

Vance wishes now they had installed one more door -- a garage-style, roll-up door -- that would have created an indoor entrance to the wash bay. The Zachariases have found a need to move equipment by forklift into the wash area for cleaning or loading. The bay also has come to be used as a staging area, where even semis can unload. With inside access between the shop and wash bay, equipment and supplies can be moved under cover.

Kentucky's Bivens spent a good deal of time planning doors -- including the service doors. His shop has six. "One shop I visited had only three. It seemed like we were constantly walking extra distances just to get into and out of the shop," Bivens says. "I don't think you can have enough service doors."

Ron Brooks of Waupaca, Wisconsin, uses the winter sun to cut by 25% the heating costs of his 8,400-square-foot shop. High on the south 20-foot-high wall of Brooks' shop is a bank of eight 3-foot-tall clerestory windows. At 44 degrees north latitude, Brooks' farm is west and a bit south of Green Bay, Wisconsin.

On Dec. 21, the shortest day of the year, the low angle of the sun delivers rays of warming sunlight that spreads nearly the width of his shop floor.

Brooks would reconsider the artificial lighting inside the shop. He installed T8 fluorescent lights when he built it. T8s are a good move away from the old, inefficient, fast-disappearing 1½-inch diameter T12 tubes. But Brooks has experienced a high failure rate with T8s.

"I wish I had gone with LEDs," he says. "I love LEDs. They produce a whiter, better working light." He didn't install them originally because they were expensive and, "I thought they might be a fad."

T8 fixtures in a shop application cost about $90 for a ceiling-mounted, six-lamp unit. The fluorescent bulbs cost about $2 each.

One feature that crept into our talk with one farmer was unexpected -- bathrooms.

When we visited the McKenzie, Tennessee, farm owned by the White family we crawled through every inch of the family's 9,000-square-foot shop and office building -- along with 15,000 square feet of partially covered concrete outside.

However, we did not spend a particularly long time in the bathrooms, except for personal reasons. When you think shops, who thinks of bathrooms?

"We need to reconfigure the bathrooms," Jeff told us. The reason for the bathroom remodel: "We have more employees," he says.

There are rules about bathrooms, actually. The U.S. Labor Department's Occupational Safety and Health Administration (OSHA) mandates the number of toilets for employees -- one for every 15. A toilet must be separated from another by partitions and doors, and for now anyway, the rules require separate facilities for men and women (unless they are single occupancy bathrooms that can be locked from the inside).

I visited a shop once where the facility was an oil funnel connected to a hose that ran through the wall to the outside. Guess that doesn't work anymore. 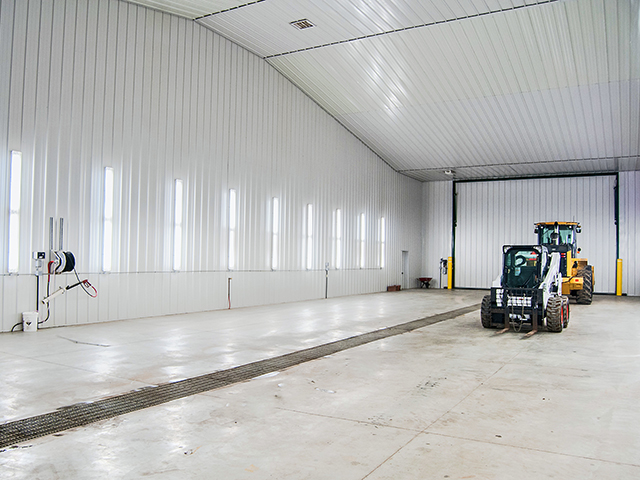