If you read the headlines, Brazil is a political disaster zone. President Dilma Roussef's impeachment trial is weeks away; the federal government is bailing out the state of Rio de Janeiro to the tune of $849 million for Summer Olympic expenses. And the Zika virus has tourists and athletes reconsidering a trip to the Summer Games.

Neighboring Argentina has its own issues. Its economy has been shaky and only six months ago, its former president boycotted the new president's inauguration.

And yet, Bob Crain sees signs of potential political stability in both nations, which have South America's largest economies. Enough stability, he thinks, to warrant some optimism that more Brazilian and Argentine farmers soon might start pulling the trigger on new equipment purchases.

As AGCO's senior vice president and general manager for North and South America, Crain spends a lot of time in the Southern Hemisphere, especially in Brazil and Argentina. After his latest trip in June, he talked to me about what he sees as positive signs from a region that is crucial to his company.

About 20% of AGCO's global business comes from South America. AGCO, which is based in Duluth, Georgia, has five manufacturing facilities in Brazil and one in Argentina. Such factories are key to a North American manufacturer's success in those countries because both have protectionist programs that make it difficult to import whole goods. That applies to both new and used equipment products.

Brazil? Crain acknowledged the steep hill the country has to climb. But after years of political and economic floundering, he said, it is making progress. Economic indicators -- GPD and inflation -- are "better than they have been in many, many months." And he sees an increasing optimism among AGCO customers about the direction of the government:

"Seems strange to say, but I think that it [the current upheaval] is bringing a little more confidence to Brazilian producers. They realize that for things to get better, there has to be change. And they are seeing that change now. Is it nirvana? No. But at least they are starting to see some stability."

Crain also said Brazil's ag sector is better off than most other portions of the economy, in part because the country's weak currency (the real) helps exports. Brazilian exporters get paid in dollars; so trading weak reals for strong dollars is smart business. "We are seeing them starting to be more willing to spend some of that money," Crain said.

That bodes well for AGCO, whose brands (especially Massey) are the market leaders in tractor and other farm equipment sales in Brazil.

Argentina? After Brazil, Argentina, is the second biggest market for AGCO in South America. Argentina's farmers are "among the best in the world. They are always looking for the latest in technology," Crain said.

Crain is optimistic Argentina's farm economy will get a boost and AGCO's sales will improve.

Of prospects for both South American powerhouses, Crain said, "Is this thing going to skyrocket tomorrow? No. But dealing with a stable industry -- one that has seen month-to-month declines -- is good for all of us." 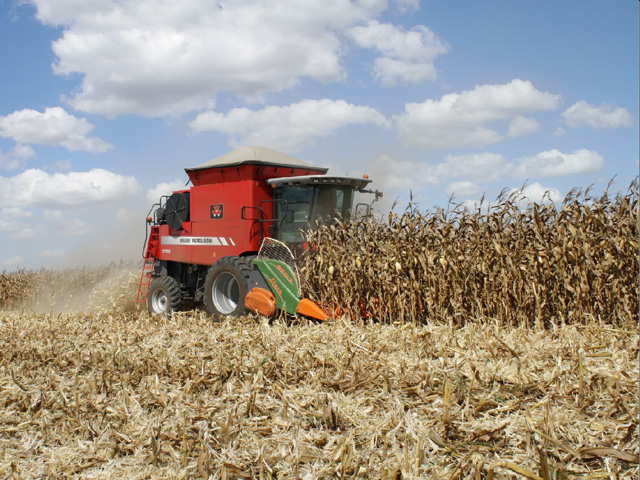