The wheat market has posted the best gains on trepidation that a need to conserve supplies for domestic needs will limit exports in many key producing countries, Ukraine and Russia in particular.

We have seen increasing talk that in the wake of the coronavirus many countries may start to hoard supplies of key agricultural commodities and in turn fuel a food scare similar to what was seen in the 2007-2008 period when food riots occurred in a number of countries.

Remember that wheat and rice are the two main consumed foods but the USDA's Foreign Agricultural Service latest Grain: World Markets and Trade publication prices have rallied for both even though global supplies are at record levels and the share of stocks to consumption is historically high.

Global wheat production is estimated at a record high 764.5 million metric tons in 2019/20.

Major producers such as China, the European Union, India, Russia, and the United States have produced at levels that are more than sufficient to meet rising global demand.

Furthermore, wheat harvests in major producing countries in the Northern Hemisphere are only a few months away.

Wheat ending stocks are also projected at a record 292.8 million with China holding about half of global stocks.

As for rice, while production levels are down year-over-year at 496 million metric tons, a bumper 2019/20 global rice harvest is still expected and even with lower production, overall supplies are up from the prior year because of record carryin stocks with 2019/20 stocks at a record 181.6 million metric tons. 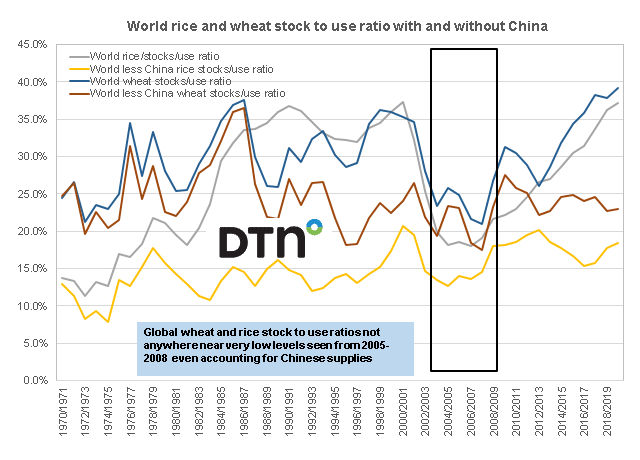