This past week saw some decent Chinese buying of a variety of U.S. agricultural commodities, but soybean sales were not one of the prominent purchases.

U.S. soybean and soybean meal futures are on alert for any delays in the shipment of South American soybeans and products to China for a variety of COVID-19 related reasons that could kick some PRC business back to the U.S.; so far there is smoke but no fire.

As a matter of fact, China reportedly has been a big buyer of Brazilian soybeans over the past two weeks based on favorable prices as Brazil will be producing a record crop this year, and their currency has continued to depreciate vs. the U.S. dollar.

For this reason, there is increasing talk that USDA is overstating U.S. soybean exports this year and a drop in their overseas sales projection could be in the cards.

This graphic shows U.S. soybean export sales and shipments as of the third week of March in million bushels on the left hand axis and as a percent of the USDA March WASDE soybean export projection on the right hand axis.

Given these figures, unless the pace of Chinese buying picks up very soon, it seems very unlikely that the final 2019/20 soybean export figure will come anywhere close to the projected 1.825 bb especially with both Brazil and Argentina traditionally being their supplier over the next few months. 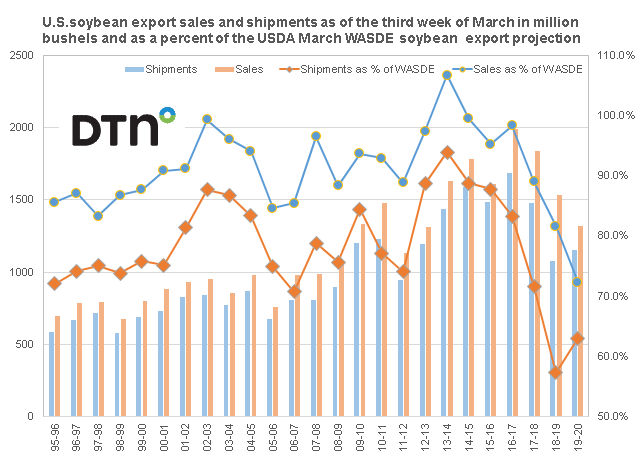