With stocks of corn, soybeans and wheat at or close to record levels in both the U.S. and globally, the idea is that world yields of these key commodities are increasing at a faster rate than demand.

We then grouped the data into two sections from 2000-2010 and 2011-2020 and calculated the capitalized annual growth rate for each of the six categories.

A similar pattern was seen for soybeans with the annual percent increase in demand exceeding the increase in yield for both time periods with demand and yield growth down in 2011-2020 vs. the 2000-2010 period.

Wheat however is opposite in every respect for demand that increased by an average of 1.09% was topped by the average annual increase in yields of 1.19% in the first ten year period with the annual percent increase in demand accelaerating to 1.39% from 2011 to 2020, but yields increased at an even faster rate of 1.61%.

A final note though the figures are not included, global corn harvested area rose by an annual rate of 1.49% in the first ten-year period and fell slightly to 1.45% from 2011 to 2020. 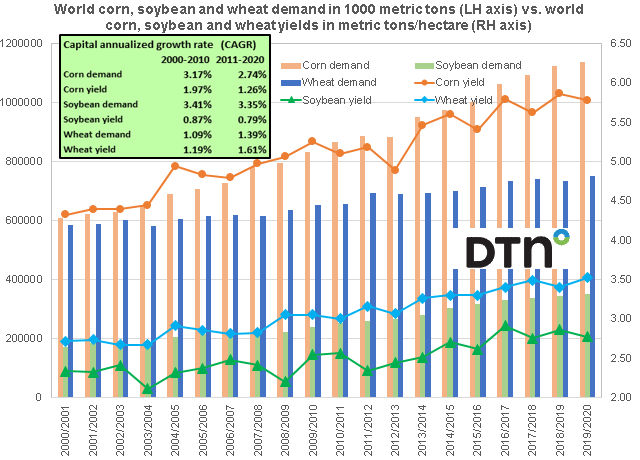